Prime Minister Hatoyama, What Exactly Do You Mean By "Deterrence" 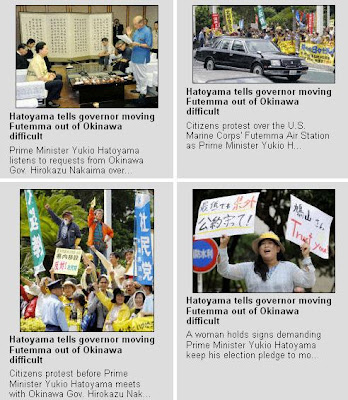 Today, we have to ask what Japan's real intentions are in terms of peace and defence. Prime Minister Hatoyama visted Okinawa and he seems to have backed away from his election promises last year. Now he talks about "deterrence" - which was not a part of the 2009 Manifesto that his party went to the polls with.

This is what Hatoyama said today in Okinawa, according to Kyodo:

In terms of deterrence, I have determined that transferring all of the functions at Futenma outside the prefecture or abroad is difficult.

Build a close and equal Japan-U.S. relationship...
Make the greatest possible effort to develop relations of mutual trust with China, South Korea, and other Asian nations...
Work toward a nuclear-free Northeast Asia...

All very good, all well thought-out, all things that a lot of voters probably believed in or at least hoped for, at least before the elections last summer.

But what Hatoyama has just done is to fail on each of these important points:

1) The relationship between Japan and the United States is not equal, with Pentagon and the U.S. State Department ordering Japan around on issues that should first and foremost be a matter of national security for Japan to decide (and with U.S. media deriding Hatoyama as "loopy" for trying to come up with novel solutions).

2) Mutual trust is only a matter of perception, and if Hatoyama backtracks on Futenma, then that is a non-issue: noone will believe he has any clout on any national security issue that matters to the region.

3) As long as Japan is hiding under the U.S. "nuclear umbrella" allowing U.S. military to decide about these matters, noone will take Japan seriously regarding talk about a nuclear-free region, which is why so many people here are peace activists (note that over 90,000 people demonstrated in Okinawa just last weekend, demanding for Futenma to be removed and the U.S. bases to be closed) and so many are working to make sure that the horrific legacy of Hiroshima and Nagasaki will never be forgotten.

What is "deterrence" that Prime Minister Hatoyama now uses as an excuse for not relocating the U.S. marine air base out of Okinawa, but instead basically going along with the controversial agreement of the previous LDP government and Defence Secretary Rumsfelt?

Today, he has visited Okinawa without giving Japan any new ideas about Japan's global peace-keeping role or what role he wants the Self Defence Forces to have. Hatoyama said on July 26, 2009: "If we are unable to bring about a change of government due to a lack of ability on my part as President, then I am prepared to take responsibility for that."

Deterrence theory during the Cold War era meant, among other things, Mutually Assured Destruction - both the U.S. and the U.S.S.R. assumed that they could not start a global nuclear war. Today, that is a failed philosophy and states are trying to reduce their nuclear arsenals. Yet, 20 years after the fall of the Berlin Wall, Japan has not come up with any better way to deal with peace and defence in Northeast Asia, or in the world. Of course, already in November 2009, some people started asking if Hatoyama's new policies would be worth its salt. Would he "honor the platform on which he and his party ran or keep the critical Japan-US alliance on an even keel."

The Tokyo Foundation: A Shaky Start for Hatoyama's Yuai Diplomacy

Animals have all kinds of clever defence mechanisms. The lion has its huge mane, and the ostrich just runs very fast (contrary to common belief, it does not stick its head in the sand, which is what Japan appears to be doing). Others have developed camouflague or use poisions or other clever tricks to avoid getting attacked or eaten.

Humans do have all of that - but moreover, we have the intelligence to create a state of affairs where we feel safe. We teach our children compassion and we learn from the past. Through introspection, meditation, and prayer, we gradually develop a sense that we are not stupid, either as individuals or as societies, and not normally prone to sociopathic behavior. If anything, the post Cold War era has shown that we can do better. Japan in particular needs to step up its efforts to take deep and sincere responsibility for its own sense of safety, and start making its own decisions about the perceptions here about peace and defence: where is the fear coming from? who is promoting the mood of concern? why does someone want us to worry? how much are they profiting from that atmosphere of fear? 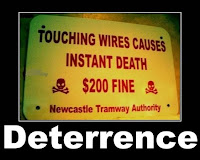 裏切り (uragiri) betrayal, treachery
裏 (ura) in the sense of "from behind" or "stabbed in the back"

In Japanese, the term for "deterrence" is generally 抑止力 (yokushi-ryoku) as in the power to inhibit or stave off. In the sense of nuclear deterrent, 核抑止 (kaku-yokushi) is used, meaning "inhibit nuclear" or "deter nuclear" (核 is "nucleus" as in the core of the atom).

Sankei/MSN quotes Hatoyama as saying that last year, he basically had no idea about the role that the U.S. marines played in this "deterrence":

Pandabonium said…
I am reminded of a line from the James Bond film "Diamonds Are Forever" which would be appropriate to say to PM Hatoyama at this point: "You had your chance and you blew it, Charlie!"

The US military presence in Japan, as elsewhere, has nothing to do with defending Japan, but rather with projecting US power into the region for US aims. In the case of Okinawa that largely has to do with Taiwan.

Deterrence in this case simply means that having American bodies in Okinawa might deter China from advancing on Taiwan. But that has naught to do with defending Japan.

As to what Hatoyama means, having American bodies in Japan means that anyone attacking Japan might kill Americans and thus bring down the wrath of the Pentagon upon themselves. But who has any interest in attacking Japan?

Reading between lines - if it takes American bodies being in harm's way for the US to respond to an attack on Japan, then is the US in Japan to protect Japan or only interested its own units and interests? Is the so-called "umbrella" conditional on US troops being stationed here? I think the answers are obvious.

In "The Japan That Can Say No" (1989) Shintaro Ishihara and Akio Morita, while representing political views I strongly disagree with, made several very valid points regarding Japan's relationship with the USA and argue that Japan does not need this relationship in which the US dictates Japan's defense structure in order to maximize America's effectiveness in the region - not maximize the safety of Japan.

Japan can and should go its own way on defense matters. She should, and is beginning to, break down the historical barriers with her neighbors, make amends, and form more cooperative relations with other Asian countries.

The American Empire is in its final stages. Energy and other resource depletion is working against globalization. A more regional outlook and shift in alliances is in order. Japan needs to stand on her own, become a beacon of peace, and cut the ties with both the imperialism of her own past and that of the US.
4:01 pm, May 05, 2010