Extreme Flooding Along The Coast Due To Earthquake And Tsunami 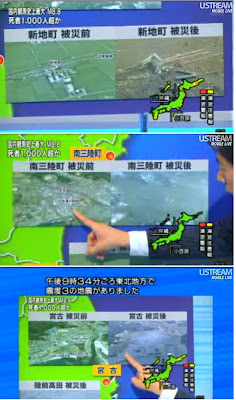 Huge areas along the coast of north-eastern Japan are flooded. Mostly small towns, in isolated areas, but also the coastal part of Sendai City (while central areas may be ok).

NHK had some rather disturbing "before-and-after" images from towns like 宮古 Miyako (bottom image) 南三陸町 Minami Sanriku-cho in northern Miyagi Prefecture (center), and 新地市 Shinchi-shi in Fukushima Prefecture (top image, that is supposed to be a station, now all immersed in sea water and debris). Large amounts of people are not accounted for in these small towns.

I'll update this as I learn more.