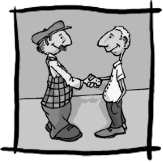 This is just such terrific news. The French organic farming movement, Urgenci, has close links with Japanese Organic Agriculture Association (JOAA) and a deep sense of connection with events here over the years. There have been many visits and support for people like Hiroko Amemiya, a researcher working on Teikei, who is a member of Urgenci: "She is is studying the current situation in Japan, in order to design a long-term relief project, centered on small-scale organic farmers. She sent some first general elements about the situation and authorized their publication in our 4th issue of the Special News from Japan."

Now, Urgenci has decided to rename their newsletter, calling it "Teikei" after the Japanese term that was introduced here in the 1970s. I helped JOAA create and edit a book about Teikei last year, thus I'm very pleased. Also, I will be going with JOAA to South Korea in September for the IFOAM World Congress, the first such event in Asia for the organic movement.

Tei-Kei: Legend has it that the face of the farmer is hiding in the vegetables in the box. The truth is far more prosaic, but none the less elegant. The word teikei 提 携 Is composed of two characters that depict an action : that of an outstretched hand and that of helping each other. This is the term chosen by the Japanese pioneers to designate the first partnerships that were developed between producers and consumers. From the outset, in the 1970s, this new form of direct sales illustrated how to jointly maintain the often fragile balance between farmers and consumers.

All local solidarity partnerships are born of the same seed; what is known in Japan as Teikei, cooperation, is transformed into the solidarity of AMAPs in France, and some of the Solidarity purchasing groups in Europe and Community Supported Agriculture so close to the hearts of the Quebecois and North Americans. Teikei is our common demoninator in our groups. It also provides the connection between these groups, this shared inspiration that encourages us to meet and develop our network.

At a time when Japan is still suffering from the trauma of the nuclear disaster, renaming our newsletter TEIKEI is a legitimate act anchored in our history. It shows that our movements all recognise our family ties with the Japanese movement and is also a symbol of our unconditional solidarity towards the families that are victims of the disaster. It is an important signal that will strengthen a great many actions that are already up and running. The reconstruction projects carried out with such strength by Hiroko Amemiya to help the farmers in the contaminated zones, as well as the testimony by Shimpei and Toshihide in Aubagne. This is the 33rd Urgenci newsletter, the first to be published using our new name, Teikei. A great deal of it is dedicated to them.

In Japan, the vast majority of farms are very small farms (less than 5 acres). They are also very numerous: there are 1.9 million, while in France there are only 500 000 with half the population. The Japanese agricultural model is still an organizational model based on harmony between man and nature, contributing to the maintenance of landscapes (Satoyama).
farming Food NGO Organic Satoyama