World's First Protest Against a Genome-Edited GMO Tomato, GABA or not?


Japan's first genome-edited food item has obtained a green light for domestic sales. This is the high-GABA accumulated tomato, the "Sicilian Rouge High GABA," developed by a team at Tsukuba University. The approval was obtained when, on 11 December 2020, Tsukuba University’s venture company Sanatech Seed notified and presented data to MAFF, and notified MHLW. Having these accepted by the two ministries completes the necessary procedure for commercialization of the novel tomato.

As genome-edited foods do not require an environmental impact assessment or safety screening as food or feed, the reality is that it is possible to distribute the food in this way, and that the food can appear on our dining tables without any labelling.

Red light is more what I would think is appropriate.

I think this is rather premature. Already there are ads for GABA Tomato Juice. But GABA has never been properly assessed for safety, especially not for the usual vulnerable groups. So why the rush?

Plus, if there is no traceability and they don't label it properly, how will consumers know that what they are buying is actually high in GABA or not?

Protest against the GABA tomato in Tokyo in December 2020 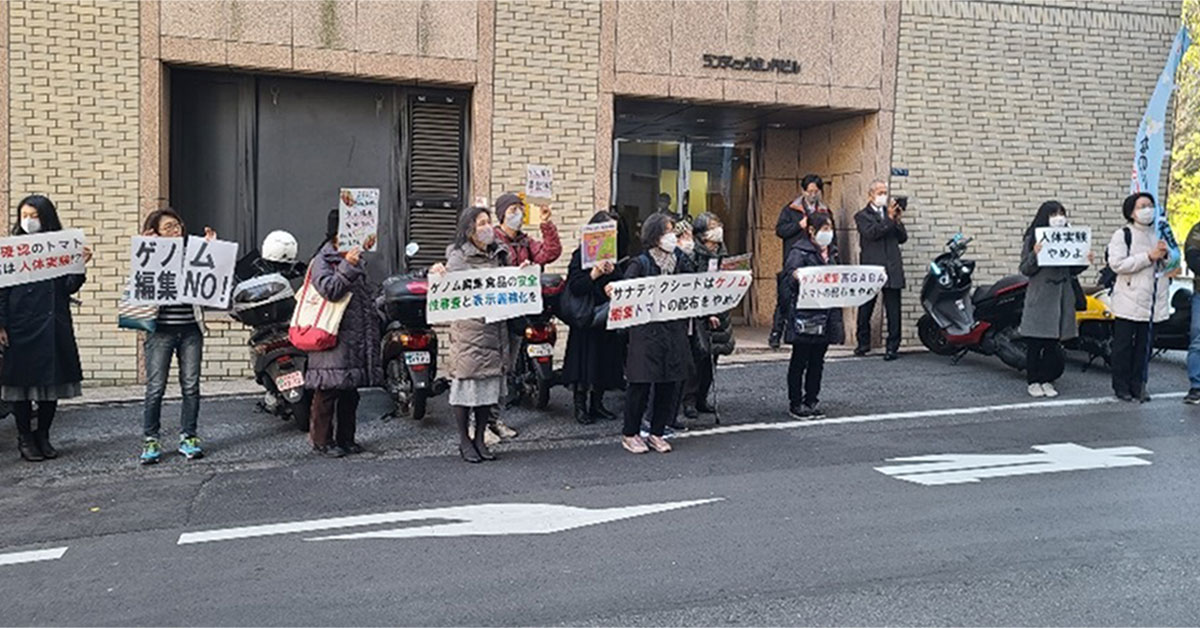 A gene-edited tomato that is intended to have a biological effect on consumers has been approved in Japan for commercial sale – without safety checks or GMO labelling. The tomato is genetically engineered to contain higher than usual amounts of GABA, a substance that is said to have the ability to lower blood pressure.

As a precaution, pregnant and breastfeeding women are advised to avoid taking GABA supplements due to the absence of safety data. Yet this GM high-GABA tomato has been approved for sale without any safety testing and likely without GMO labelling. Let's hope it's at least product/variety-labelled as high-GABA. Otherwise, how pregnant and breastfeeding women are expected to avoid this risky food is anyone's guess.

Consumer groups are protesting against the approval of the tomato – see item 2 below.

On 11 December 2020, Japan's first genome-edited food item obtained a green light for domestic sales. This was the high-GABA accumulated tomato, the "Sicilian Rouge High GABA," developed by Professor Hiroshi Ezura and his team at Tsukuba University. The green light was obtained when, on December 11, Tsukuba University's venture company Sanatech Seed notified and presented data to MAFF, and notified MHLW. Having these accepted by the two ministries completes the necessary procedure for commercialization of the tomato. As genome-edited foods do not require an environmental impact assessment or safety screening as food or feed, the reality is that it is possible to distribute the food in this way, and that the food will appear on our dining tables without any labelling.

Genome-edited crops that have appeared thus far are limited to the US Calyxt high-oleic acid soybean and the Cibus Canada Inc. canola that is tolerant to the sulfonylurea herbicides. Of these, the herbicide tolerant canola is said by the developing company Cibus to have not been developed by genome editing (as noted in the Japanese version of BioJournal in November 2020), and if this is true, then the only genome-edited crop now being grown is the high-oleic acid soybean. Now, the genome-edited tomato developed in Japan is added to this. According to Sanatech Seed, however, as the intellectual property rights procedures have not yet been completed, sale of the seeds and commercial planting cannot yet be carried out. For this reason, Sanatech Seed has announced that it will provide seeds free of charge from 2021. Thus, a genome-edited crop could be cultivated in many homes leading to the heightened danger of a disorderly spread of the crop.

The approved genome-edited tomato has been modified to include large amounts of GABA, a substance that is said to have the ability to hold down human blood pressure. More precisely, to raise the GABA content, the glutamic acid decarboxylase gene has been partially modified. It is reported that this tomato contains 5 to 6 times the amount of GABA than normal tomatoes. Originally, Sicilian tomatoes are a variety usually used for cooking, but the developed genome-edited tomato was used as the parental line for improving the variety and the generated F1 line is expected to be sold as seeds or seedlings for edible tomatoes.

Still, this tomato has many problems. Agrobacterium was used as the vector and the DNA in the bacteria's plasmid has been spliced to insert a Cas9 gene, a gene tolerant to the antibiotic kanamycin as the marker gene, and, further, a "CRISPR-Cas9 expression cassette" with an inserted cauliflower mosaic virus. Whichever way you look at it, this is nothing but gene modification.

Nevertheless, the MHLW deliberative council did not require safety screening as "genome editing differs from gene modification." In addition, while this crop has been developed as a government project, the deliberations were held in closed-door session.

Regarding off-targets, where DNA may be severed in locations other than the target, something that has been pointed out as a problem with genome editing technology, the whole genome has not been investigated, and this is terribly insufficient. Epigenetic variations have also not been examined, making it very difficult to say that safety has been confirmed. Since foods are not labelled, consumers are unable to make choices. It seems that there are just too many problems for the first genome-edited [food] to appear on the Japanese market.
---

We are a consumer organization that is working for food safety.

It has been reported that your company is distributing free of charge high GABA tomatoes produced with genome editing technology for home gardening. We believe that genome editing technology, like genetic modification technology, is potentially risky as it can cause unintentional genetic mutations and create unexpected harmful substances in crops. We are concerned that it is a big problem that genetically engineered foods, whose safety has not been fully confirmed, are being used for food.

We have some doubts about the explanatory materials that your company submitted to the Ministry of Health, Labor and Welfare (MHLW) and posted on the MHLW website, and we believe that the act of free distribution for home gardening, as announced by your company on your website, is tantamount to human experimentation.

We would like to ask you a few questions about your explanatory materials and your thinking. We will publish your response on our website.

The biggest concern about GM crops is the production of unexpected harmful substances due to unintentional genetic mutations that occur in the process of genetic engineering. In relation to this, we would like to ask the following questions:

(1) In the explanatory materials, you say that you searched for off-target candidates using two methods and investigated mutations in areas common to both methods.

(2) Instead of narrowing down the off-target candidates, you should check all the genes to see if there are any off-target cases.

(3) In the description of the allergen confirmation, there is a phrase “where mutations were identified in the target sequence and off-targets,” which contradicts the explanation in the previous section that there were no off-targets.

(4) Allergen identification was performed only for the locations where mutations were identified in the target sequences and off-targets.

(5) Tomatin was analyzed and it is stated that “Since tomatin did not increase, it is assumed that the analogues of tomatin and other alkaloids did not increase as well.”

(6) Please disclose which substances were analyzed for changes in composition compared to the pre-genetically engineered crop, and what the results were.

2. We believe that the “substantial equivalence” assessment of genetically modified crops is not a guarantee of safety because it does not confirm the production of the unexpected harmful substances mentioned above. Genome edited crops are not subjected to “substantial equivalence” review, but it is tantamount to human experimentation to use them for food without any confirmation of safety. In relation to this, we would like to ask the following questions:

(1) An antibiotic resistance gene is used as a marker gene, and a cauliflower mosaic virus gene is used as a promoter gene. What kind of research has been conducted on the effects of these genes, which may lead to unexpected genetic mutations?

(2) Do you have any plans to conduct animal experiments to confirm the safety of the product?

(3) In the explanatory materials, it is stated that the recommended intake amount will be indicated when the product is put on the market, but how do you think it will affect pregnant women, people with underlying diseases, and infants with an underdeveloped blood-brain barrier?

(4) Do you think that consumers who apply for the free distribution of genome edited crops for home and garden use will do so after learning about the risks pointed out by consumer groups? Or will they only apply based on your explanation of safety?

(5) How do you plan to understand the health effects of high GABA tomatoes?

This genome edited tomato was developed as a national project. Since the taxpayers’ money has been invested in this project, there should be social responsibility based on this. We would like to ask a few questions regarding this point:

(1) How much funding was provided by the government?

(2) Why are you rushing to market before you have a social consensus?

(3) How much of your budget is used to acquire intellectual property rights?