Showing posts from November, 2011
Show All

TPP: To Join Or Not To Join (Or Consult About Possibly Joining)

November 13, 2011
The last words on Japan's participation in the Trans Pacific Partnership (TPP) negotiations were vague, to put it mildly. Prime Minister Noda was supposed to decide on Thursday, then delayed 24 hours, and by Friday he said Japan would "start talks with related countries toward participation in the TPP negotiations," according to the Daily Yomiuri. Daily Yomiuri: Noda chose words carefully / TPP language thought to be aimed at soothing opponents Noda sought to win the support of opponents to the talks by referring to his experiences on his family farm. "I remember my mother carrying me in a basket on her back in my childhood," he said. "I remember the earthy smells and the calm and peaceful farm village. These early experiences will remain in my memory. I will always protect beautiful farm villages." Noda carefully coordinated opinions inside the government and the ruling coalition parties. He postponed his decision on the TPP for one day on Thursda
1 comment
Read more 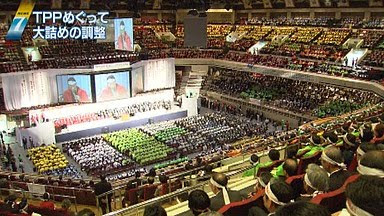 You may not know it, but Japanese people are very vocal and very outspoken. They protest a lot! Foreign media usually does not bother to cover activism in this part of the world. The current protests here in Japan against the Trans Pacific Partnership (TPP) is a case in point. Over 11 million Japanese people have signed a petition against TPP . They realize that "free" trade is nothing but a massive assault that will force impossible conditions on their livelihoods. What is so "free" about that? It could be called the fourth disaster to strike in 2011, after the March 11 earthquake, tsunami and nuclear disaster in Fukushima. Joining TPP negotiations to eliminate 90% of agricultural tariffs would make it impossible to live in rural Japan. TPP might lead to a lowering of Japan's food self-sufficiency from around 40% to 13%. Asking Japan to import 87% of its food? That would essentially kill one of the best reasons this country has for attracting tourists. It
Post a comment
Read more

Some Surprises As I Search For "Off Grid" On The Internet

Living "off grid" or independently of the usual power supplier (the "grid") is not an unusual concept, although most of us are still trying to find ways of actually doing it. At least we are thinking about our energy consumption. Perhaps that requires some heavy duty Internet search! If I use Google.com, I get lots of interesting results for オフグリッド (off grid), including: offgrid-solar.jp (a do-it-your-self shop website with lots of cool ideas) Offgrid Q & A (blog by a small company with big ideas) nextenergy.jp Ultra Technica (Beautiful visions by Osaka architects longing for off-grid living) greenz.jp (a crazy entry on a French ad for a certain company about how to get energy from - oranges!) If your search engine of choice is selective, it will influence your world view - if you use commercial Internet search engines that select what you get in reply to your queries, based on who pays. I worry that even more selective search engines can and may infl
Post a comment
Read more 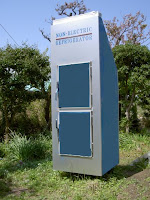 A clever inventor in Nasu, Tochigi prefecture is thinking about how to live a non-electric lifestyle - and doing something about it. Yasuyuki Fujimura, with a PhD in engineering, makes products that don't run on electricity, including this fascinatingly simple refrigerator. Japan for Sustainability explains: How can it refrigerate food without electric power? It uses a phenomenon called radiational cooling together with the natural convection currents of water. Radiational cooling occurs when infrared radiation is emitted from an object's surface, causing its temperature to decrease. On a clear night, infrared rays are emitted from the ground into the atmosphere, cooling the air down. This is why the night is extremely cold in the desert. Most people have experienced water's natural convection currents when warm water rises while cold water sinks and pools at the lowest level. The cooling unit of the refrigerator (capacity 200 liters) is made of metal that has high th
Post a comment
Read more

Director: Masayuki Suo (1997) Enjoy. But, I have to say, I'd love to see a take on this film where a bunch of Europeans try to learn Japanese dancing LOL.
Post a comment
Read more

Speaking of recent films, I had the pleasure to watch Dancing Chaplin here in Hanno, where some good people are trying to set up an independent movie theatre. Directed by Suo Masayuki, the film has two parts: a documentary approach and the real deal, filmed at the Toyo Studios in Tokyo. A ballet based on the films by Charlie Chaplin. I enjoyed every minute. Starring dancers Tamiyo Kusakari, Luigi Bonino, Lienz Chang. Quote from Toronto J-Film Pow-Wow : Now director Masayuki Suo will be returning to the the big screen with another dance-themed film. The 54-year-old filmmaker is set to direct "Dancing Chaplin", a loose adaptation of French choreographer Roland Petit's ballet "Chaplin". This return to dance for Masayuki Suo is a labour of love in more ways than one. The star of "Dancing Chaplin" will be Suo's wife, ballet dancer Tamiyo Kusakari. Although Kusakari will be starring opposite dancer Luigi Bonino she will be apparently taking on six
Post a comment
Read more

Tintin In Congo On Trial In Belgium 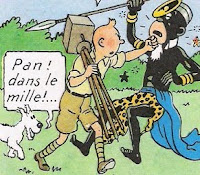 I just can't resist... The 1930s is a very long time ago, but still, there are people with chips on their shoulders. One case is the current trial in Belgium against the album Tintin In The Congo. And here is my take on this sorry affair (hrm): I totally agree that Tintin in Congo should be banned and erased from the history books. Why? Obvious! It portrays a young white man as an agent of colonialism in Africa: we just cannot allow that story to be told in 2011! Why should a picture book about a white man and his noble efforts back then still be read today, when we are so much more enlightened and know that all men are created equal, and that white men are (and thus were!) no better or worse than anyone else! Let's stop this implied racism against young white men, once and for all. In fact, prohibit all of the Tintin books, while we are at it, since young white men are bound to find his actions so outlandishly lacking in values that we regard as common sense today, 80 years
2 comments
Read more

TIFF Tokyo Drifter, Everyone Was On Edge 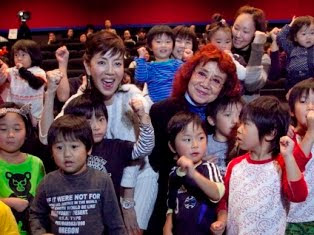 Tokyo's International Film Festival is one of many events in this city, if you search for TIFF you'll get all kinds of answers. 2011 is the 24th event. Action for Earth! was the theme. Good. They held a special event in Sendai to support the survivors of the March 11 earthquake and tsunami, with a special screening for children: Hal’s Flute is an animated film based on a story by Takashi Yanase, a Japanese creator of popular anime Anpanman. Following the screening at a theater full of children, voice over actresses Keiko Toda and Masako Nozawa came out on stage. Nozawa praised the film saying, “All creatures share the same emotion. This story lets you go back to the basics you tend to forget about.” Toda delivered a message from Takashi Yanase. “I would like the adults to watch this film, too. It’s very touching and has warmth and may do wonders to your mind.” A photo session with the two voice-over actresses and the children followed and the whole theater was filled with a
Post a comment
Read more 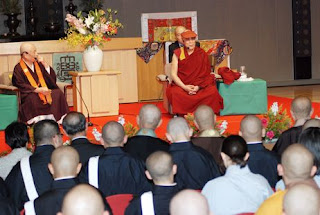 The Dalai Lama is visiting Japan. After his lecture at Mt Koyasan, he will go to Sendai to talk to people in the region who survived the March 11 earthquake and tsunami. Asahi Shimbun: Dalai Lama delivers sermon at Mount Koyasan The Dalai Lama gave a sermon at Wakayama Prefecture's Mount Koyasan, one of the most sacred sites in Japanese Buddhism, on Oct 31, during his first visit to the area in 31 years. The event, organized by Koyasan University, was intended to promote academic and cultural exchanges between the Koyasan Shingon Buddhist sect, which is headquartered at Sohonzan Kongobuji temple at Mount Koyasan, and Tibetan Buddhism. About 800 people, including young monks and members of the public, attended the event. At the beginning of the sermon, the Dalai Lama told the audience that he wanted to share, as a friend, the sorrow and pain of the Great East Japan Earthquake. He and Yukei Matsunaga, chief administrator of the Shingon sect, answered questions from the audience.
Post a comment
Read more

An Organic Farmer Speaks Up Against TPP 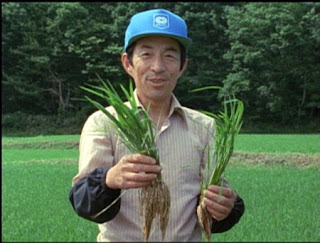 The Mainichi has a great piece about Japanese farmer and poet Kanji Hoshi, 76, who has been engaged in organic farming for 38 years in the Yamagata Prefecture town of Takahata. Kanji-san is opposed to Japan's TPP participation: Hoshi is the author of an essay called "Sonno joi no shiso: han TPP no chiiki ron" (The philosophy of revere agriculture, expel the barbarians: anti-TPP localism), published in May 2011 in the book, "Takahata-gaku" (Takahataology). In it, he writes: "I would like the philosophy of revering agriculture and expelling the barbarians to be the stronghold against the black ships of TPP," Hoshi writes. "We need to give primary importance to agriculture for its production of food for life, and to justly appreciate its function of protecting the environment. If we destroy our beautiful homeland, we will not be able to face our descendents. 'Expel the barbarians' refers to the elimination of our disposable consumer civiliz
1 comment
Read more
More posts