Showing posts from January, 2012
Show All

This is a very special film, about ballet, as Subaru overcomes all kinds of trouble to reach the highest level of dancing. If you like classical music, this is a motion picture that may move you, as the characters evolve. Kuroki Meisa is Subaru, based on a manga with the same name. Hong Kong-born director Chi-ngai Lee has made a beautiful film from a difficult story. Here is part 3 of the film: And if that is not a rather good take on the Bolero, well, who am I to judge. It gets better after this, trust me, as Kuroki Meisa is perfect. Plot: Subaru and her twin brother Kazuma share a dream in becoming ballet dancers, but their passion is discouraged by their father. After Kazuma's death from a hereditary illness, dancing became Subaru's only happiness and she yearns to lose herself in dance. Her life takes a dramatic turn when she runs into cabaret owner Isuzu, who recognizes the talent in Subaru and trains her in her nightspot. But to become a professional ballerina, Su
2 comments
Read more

Referendums On Nuclear Power In Japan

The debate about nuclear power in Japan just got even more interesting. In Osaka, a group has collected enough signatures to submit a petition to the city government for a vote on the issue. Now, the focus is on Tokyo. I went to a large meeting at Waseda University on Friday with about 300-400 people who were eager to bring this issue to the attention of everyone in the nation's capital. One of the panelists even suggested that the vote should be about constructing the next nuclear reactor for Tokyo, in the middle of Tokyo. Others noted that it is unfair to ask Fukushima or Niigata to continue to provide electricity to Tokyo, after what happened on March 11, 2011. (Top photo from Kokumintohyo.com as the campaign celebrates that enough signatures have been collected in Osaka) The campaign is led by journalist Imai Hajime and supported by people like actor Yamamoto Taro, who participated in the event in Waseda. My friend Lena Lindahl was invited to discuss the experience from Sw
Post a comment
Read more

Back in 1964, Japan was hosting the Olympics, and the Shinkansen bullet trains were introduced from Tokyo to Shin-Osaka, and colour television was a novelty. The clever people over at Toho, the film company, just released another film with the Always cast, moving on from 1959, as we get to enjoy the characters who make a living in an imaginary Sanchome part of Tokyo, back then, in the sunset, when everything was still possible. In the new '64 film, the Blue Impulse jets draw five rings in the sky. It is shown live on TV, but of course it is even more vivid if you step out and watch it for real, above. Bansai shouts are confused with victory in volleyball, and a precocious high school boy is found out to be a succesful manga writer. A young medical doctor is not what he seems, either. Always - I like how they keep it real. These films are funny, the stories make me cry, and they make me wonder how a great city like this could go from that to such utter madness. Back in 1964, Japa
Post a comment
Read more

Can Japan Phase Out Its Nuclear Reactors? 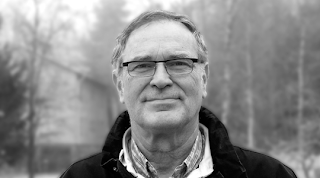 I just thought I'd like to mention one thing from the Yokohama anti nuclear power conference on January 14-15 that I can't get out of my head. At one of the workshops, Swedish expert Göran Bryntse, PhD, who has led the anti-nuclear movement in Sweden for a long time, talked about how citizens can change the energy policy. First of all, he noted, energy efficiency is the best and cheapest alternative to nuclear power. For example, a country like Sweden can save up to one third of its energy consumption through heatpumps, more efficient engines, LED lights, and new whitegoods such as the latest refrigerators. In the case of Sweden, these measures would be able to replace 4 nuclear reactors, according to Dr Bryntse. Additionally, 6 more nuclear reactors can be replaced by wind power (3), biomass and co-generation (2), and solar energy (1). Thus, all of Sweden’s current 10 nuclear reactors can easily be phased out. Consumers Union of Japan: 11,500 Participants In Yokohama Want
1 comment
Read more 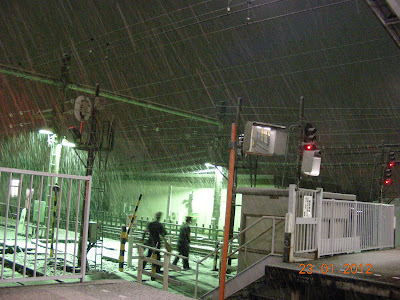 I took a couple of photos tonight as it started snowing heavily. Click to enlarge. The first one is from Hanno Station where the workers were busy shoveling. I like how the second image came out, that's a view of the plum trees in front of my house. The third one is lit nicely by a car that came by, passing the gate to a small shinto shrine I was trying to photograph.
Post a comment
Read more 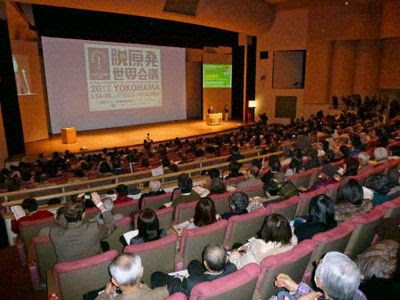 Over 11,500 people attended the two-day antinuclear conference in Yokohama with the aim of sharing lessons from the Fukushima crisis and fostering global momentum against atomic power. I'm just back from the second day; I liked how this event felt like a milestone. 10 months after the March 11, 2011 disaster, all kinds of groups and ordinary people showed up to exchange ideas and participate in a positive, forward-looking event. A lot of young people, and the staff made every effort to guide everyone to the right venue, offering simultaneous interpretation to anyone who asked for it. Excellent in every way. The organizers had hoped for a nice round 10,000 to attend, so this was a huge success. There were peace groups and environmental groups, and the old-timers who have campaigned even back when campaigning was not very popular in Japan. There were new groups of people who have been forced to deal with the unthinkable: mothers in Fukushima, worried about their kids, and lawyers t
2 comments
Read more 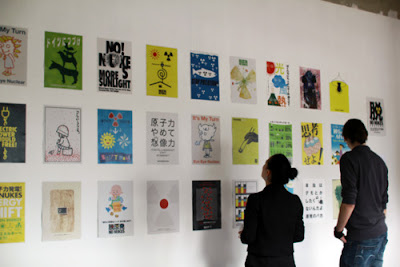 On January 14-15 2012, the Global Conference for a Nuclear Power Free World will be held in Yokohama, Japan. Participants from Japan and all over the world will gather to consider the issues surrounding nuclear power and discuss steps that can be taken towards a nuclear power free world. Come and be a part of this conference. http://npfree.jp/english.html A good place to start exploring the mindset of people in Japan that are thinking about how to use art and graphics to get rid of nuclear weapons and nuclear power: No Nuke Art It began with the Nuclear Power Day poster contest held by the Ministry of Education, Culture, Sports, Science and Technology and the Ministry of Economy, Trade and Industry from 1994 to 2011. The contest collected posters primarily from elementary and junior high school students across the country as a way of furthering the understanding of nuclear power and radiation. There were mounting calls on Twitter to hold a No Nukes poster exhibition to count
Post a comment
Read more

I'm happy to report that I was interviewed by an excellent writer for Gourmet Magazine. I was impressed by Pervaiz Shallwani's balanced approach to a difficult topic. There are a lot of rumours but he managed to distill the facts and come up with a piece that pretty much sums up how I feel about things, post March 11, 2011. Wow, already 10 months ago... Gourmet Magazine: Fukushima Fallout Japan has a reputation for being on the forefront of food safety, having established stringent safeguards against mad cow disease after outbreaks in the 1990s, for example. But in the face of the unprecedented challenges Fukushima has presented, many Japanese found the early government response to be slow. It’s a viewpoint shared by Martin Frid, a Tokyo-based expert on Japanese food safety with the well-respected independent consumer watchdog group Consumers Union of Japan, which was critical of the government’s initial efforts. “It took some time [to identify] where the plume of smoke h
Post a comment
Read more

Global Conference for a Nuclear Power Free World 2012 Yokohama Time: 2012 Jan 11 13:30 – 14:30 Summary: PRESS CONFERENCE Tatsuya Yoshioka, Peace Boat, Aileen Mioko Simith, Green Action Rebecca Harms, GREENS/EFA Group Mycle Schneider, International Consultant on Energy & Nuclear Policy Global Conference for a Nuclear Power Free World 2012 Yokohama http://www.npfree.jp/ The Japanese nuclear industry used to advertise itself as providing “the world’s safest nuclear energy,” but last year’s massive earthquake and tsunami of March 11 laid waste to those claims as the Fukushima Daiichi nuclear power plant became the epicenter of the 21st century’s worst nuclear disaster, and in some people’s opinion, the worst ever. Six Japan-based organizations which had presciently been calling for this East Asian nation to reassess its romance with nuclear power from well before the time the Fukushima disaster occurred are now organizing the largest conference on energy policy yet to be held to p
Post a comment
Read more 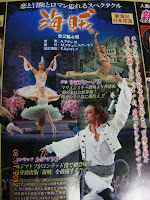 I was very lucky on Friday to get a ticket to a world-class ballet performance by the Leningrad State Ballet with Faroukh Ruzimatov. I happened to be in Ueno and dropped by Tokyo Bunka Kaikan, and if I waited, there would be last-minute tickets for sale from 17:30. Of course I waited. I have seen Ruzimatov perform before in Tokyo (new HQ video added!), and he has such a huge following in Japan. One thing I like about ballet is that the audience can applaud and cheer as much as they wish, even while the music and the dancing is going on, as a way to encourage the stars. Compared to ordinary classical concerts that are usually rather solemn events, ballet performances are "free-for-all" with lots of shouts of "Bravo!" after (or during) a spectacular spin. Le Corsaire from 1856 is a very entertaining ballet, with a mean bunch of Arab pirates washed ashore a southern beach in Greece. Soon, some local girls appear to dance and win their hearts... There is a sultry
Post a comment
Read more

Here is Tchaikovsky from this year's New Year Concert in Wien, Austria: Panorama und Walzer aus dem Ballet Dornröschen (Sleeping Beauty) from 1890: King Florestan the XXIVth declares a grand christening ceremony to be held in honor of the birth of his daughter, Princess Aurora named after the dawn. An entourage of six fairies are invited to the Christening to be godmothers to the child. They are the Candide Fairy, the Coulante Fairy, the Miettes Fairy, the Canari Fairy, the Violente Fairy and—most importantly—the Lilac Fairy, who is the last to arrive (the names of fairies and their gifts vary in productions). As the fairies are happily granting gifts of honesty, grace, prosperity, song and generosity, they are suddenly interrupted by the arrival of the wicked fairy Carabosse, who is furious at the King's failure to invite her to the ceremony... Suntory Hall in Tokyo also had the following lineup, a little too heavy on Strauss for my taste: SYMPHONIE- ORCHESTER DER W
3 comments
Read more 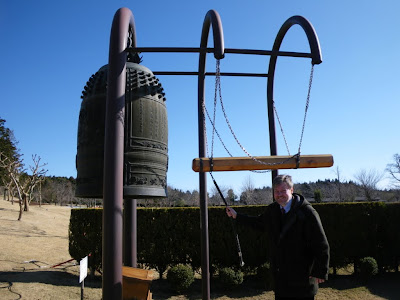 Ringing the bell at a temple is a good way to start a new year. Pandabonium caught me over at the Big Buddha at Ushiku, Ibaraki. I hope to visit soon, again. Thanks. Saying thanks seems to be important for me as we move into the year of the dragon, 2012. I have so much so be grateful for. Hope you all feel the same. Thanks for reading Kurashi, since 2005, it has been a lot of blogging. Not sure if this "eco blog" is still what it claims to be, as car makers and air con makers and anyone with a story to tell now have become "eco" and I doubt that there is any logic to their ecology. When I first started this blog, I don't think anyone else was blogging about green topics from Japan. Well, things have changed, but have you? Ten Thousand Things is my favourite blog to watch for 2012. Shisaku is very good too, if you want to follow "Marginalia on Japanese politics and society", as he puts it. Global Talk 21 is rather good, if only he would post more
5 comments
Read more
More posts