Showing posts from August, 2013
Show All

Flying back from Brunei where I attended the TPP negotiations, I caught the film Library Wars about censorship. It seemed somehow more than just a coincidence. A great story based on a popular manga by Hiro Arikawa, the action flick is set a couple of years in the future, when a militant group attacks book shops and libraries based on an obscure censorship law implemented to protect the public from smut. This also deals with copyright issues and freedom of speech. Instead, the main protagonist, young Iku Kasahara (Nana Eikura) charms viewers with her good intentions, judo moves, and a search for the "prince" that once helped her save an important book that was about to be confiscated. Her friend Asako Shibasaki (Chiaki Kuriyama) is probable a better known actress abroad but the cast all manage to make the story believable and gripping. Short trailer here: The Hollywood Review didn't like it much, but they also don't seem to get the political undertones. Kotak
Post a Comment
Read more

August 22, 2013
Rare insight into how things work. President Obama was expected to help stem the flow of tobacco into developing countries with the Trans Pacific Partnership , a free trade agreement that’s been in clandestine negotiations for three years now. Last May, the U.S. Trade Representative  outlined a tobacco proposal that would have recognized the uniquely harmful status of the substance and created a “safe harbor” for countries to regulate it within their borders. Public health advocates including Rep. Henry Waxman (D-Calif.) applauded the step, while voicing hope that it might be strengthened even further. The proposal didn’t get far, however, before facing an intense opposition campaign from companies and tobacco state legislators. They’re backed supported by a U.S. business establishment that doesn’t want to see exceptions created for any products on public health grounds, fearing that junk food could be next. “Nowhere have they said publicly that they think their initial po
4 comments
Read more

Just as predicted, main stream media promotes fracking and goes to no extreme in publishing claims about other "future" solutions to energy issues. Now it is "Scientists in Japan and the U.S. say they are moving closer to tapping a new source of energy: methane hydrate, a crystalline form of natural gas found in Arctic permafrost and at the bottom of oceans." AP/Dow Jones/Wall Street Journal: Scientists Envision Fracking in Arctic and on Ocean Floor Commercial production of methane hydrate is expected to take at least a decade—if it comes at all. Different technologies to harvest the gas are being tested, but so far no single approach has been perfected, and it remains prohibitively expensive.  So, what are some of the concerns? The biggest concern is that the sediment that contains methane hydrate is inherently unstable, meaning a drilling accident could set off a landslide that sends massive amounts of methane—a potent greenhouse gas—bubbling up th
1 comment
Read more Hokkaido farmers protesting against the Trans Pacific Partnership (TPP) trade deal that is so far cloaked in secrecy, complete elimination of tariffs is a stated goal, with all kind of more strict intellectual property rules in place? Who is behind this? Why? Do explore. Do get engaged. The Japan Agri News: 7,000 Hokkaido farmers and citizens protest against TPP talks As many as 7,000 people gathered in Sapporo, Hokkaido, on Thursday, July 25, to stage a protest rally against Japan’s entry in to the Trans-Pacific Partnership free-trade talks, and pledged to strive to protect the nation’s largest agricultural region. TPP pact protesters march through the streets of Sapporo, Hokkaido, on Thursday, July 25. The protest rally, held by 4 agricultural groups including the Hokkaido Prefectural Union of Agricultural Cooperatives (JA Hokkaido Chuokai), was supported by 43 groups such as the Hokkaido Prefectural Government, the Hokkaido Economic Federation, the Hokkaid
2 comments
Read more 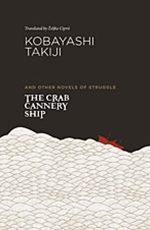 Finally we have a solid translation of the classic story, The Crab Cannery Ship, by Kobayashi Takiji (1903-1933) translated by Zeljko Cipris, with an introduction by Komori Yoichi, published by the University of Hawai'i Press. Do find it in your local bookshop or on the Internet. Plus two additional short stories published in English for the first time, Yasuko and Life of a Party Member. Look Inside (Amazon) Mark Schilling explains : Why does a novel about exploited workers on a crab cannery boat, published 80 years ago by a young communist writer, later tortured to death by the police, become a hot movie property now? The program for “Kani Kosen” (“The Crab Cannery Boat”) explains that a store poster, inspired by Takiji Kobayashi’s eponymous novel, became a media sensation last year and, before you could say “bubble,” indie veteran Sabu scripted and directed a film. “Kani Kosen,” however, is not another pop culture throwaway, made to capitalize on a fad. It is also n
2 comments
Read more 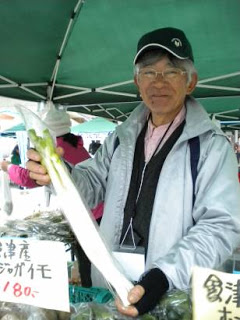 I just have to blog about this, it is so great. Joan over at Japan Farmers Markets keeps telling everyone about these places where you can get fresh produce directly from farmers, from all over. Her blog is terrific. And she is doing it too, do read up if you want tips about organic farming, she's an expert. And she does all of this in the western area of Tokyo, an hour or so from your regular Yamanote line hangouts. At Nippori you can join the obon dancing on Saturday night, until 8pm. East side of the station. Good chance btw to learn more about the hard lessons of farmers in Tohoku since March 11, 2011. Friday, August 16, 2013 Tokyo Farmers Markets: Saturday, August 17th and Sunday, August 18th Earth Day Market in June. Welcome to the most farmers-market-y weekend in Tokyo! Markets abound making choices of which one to attend a bit tricky. I'm a fan of the Nippori Market for its petite size, excellent food options (tr
2 comments
Read more 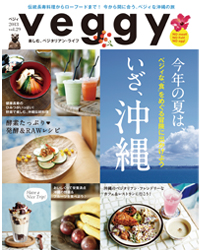 Well this is fun, what energy. Vegan Palooza in the US is happening right now from August 15-18, 2013. Do care It is happening here too in Japan, do get the latest July issue of Veggy with a focus on Okinawa. OkiNinjaKitty says: Fresh Produce Please One of the great things about living on Okinawa is that there is always fresh produce. Whether it comes from the main island of Okinawa or one of its outer islands grocery stores and farmers markets are always stocked with what’s fresh at reasonable prices. This makes the local grocery stores and farmers markets the place to be if you’re a vegetarian. Although there are large supplies of fresh produce available it’s important to consider that being in Japan the selection may be different from what you are familiar with. There will undoubtably have to be a slight change in your diet if your main source of nourishment is vegetables making it more in line with what you can find here. Another thing to consider
2 comments
Read more 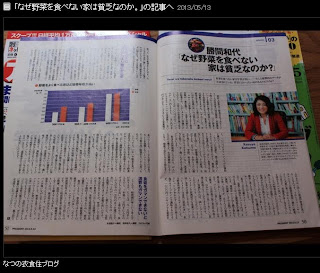 President, one of the many magazines covering economics and society here in Japan, discussed food poverty in the May issue. While we may hear about "B-class gourme" schemes that highlight the usual popular ramen places or cheap udon, of course people know that there is more to nutrition and health. TV commercials and regular broadcasting will have no limit to their promotion of (imported) meat and wheat. B-class food President wonders why women are more interested in vegetables than men. The article also correlates income with healthy choices. This needs much more investigation as we are in dire straits and less connection to the traditional, healthy diet in Japan. What is clear from the President study is that more women will chose more vegetables in their diet, when they feel the pinch. From Japan Guide: Japanese cuisine places a strong emphasis on quality and seasonality of ingredients. This is especially true for vegetables, which are a fundamental ele
4 comments
Read more
More posts