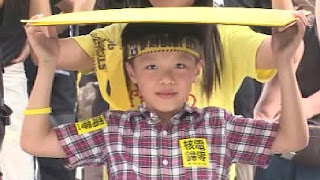 Nuclear power is getting increasingly controversial in this part of Asia. As if Japan wasn't in enough trouble, do consider what is going on in South Korea and Taiwan.

Nuclear power policy and management in South Korea: a game where the players are their own referees? Critics are saying the accidents and irregularities discovered over the past two years at nuclear plants are just the tip of the iceberg for a system that has gone on for more than 50 years, where a so-called “nuclear power mafia” holds public safety and power supply in its hands.The biggest issue is a scandal that surfaced on May 28, in which plants were found to have been supplied with defective control cables after testing results were falsified, may not be the last. Even the Nuclear Safety and Security Commission (NSCC) acknowledged that similar scandals “could emerge” in the future.


Now, a snowballing scandal in South Korea about bribery and faked safety tests for critical plant equipment has highlighted yet another similarity: experts say both countries’ nuclear programs suffer from a culture of collusion that has undermined their safety. Weeks of revelations about the close ties between South Korea’s nuclear power companies, their suppliers and testing companies have led the prime minister to liken the industry to a mafia.
The scandal started after an anonymous tip in April prompted an official investigation. Prosecutors have indicted some officials at a testing company on charges of faking safety tests on parts for the plants. Some officials at the state-financed company that designs nuclear power plants were also indicted on charges of taking bribes from testing company officials in return for accepting those substandard parts. Worse yet, investigators discovered that the questionable components are installed in 14 of South Korea’s 23 nuclear power plants. The country has already shuttered three of those reactors temporarily because the questionable parts used there were important, and more closings could follow as investigators wade through more than 120,000 test certificates filed over the past decade to see if more may have been falsified.

As in Japan with Mitsubishi and Hitachi, in South Korea it is Hyundai and Samsung that have provided the setting for the unfolding scandal. The public needs to wake up but power shortages in South Korea are already a reality, with people using hand-held paper fans instead of using electric air conditioners. As in Japan, saving electricity is becoming a national passion in South Korea.

As for Taiwan, the ruckus in the Taipei parliament was international news. On August 2, lawmakers fought hard about a proposed referendum on a fourth nuclear plant in Taiwan. Like Japan, Taiwan has many large earthquakes, the latest big one in 1999 was a 7.6 magnitude that killed some 2,400 people on the island. Anti-nuclear groups and environmentalists have held large protests over the past weeks in Taipei and near the construction site.

An opinion poll conducted by the Taipei City Government in March showed that 66% of residents in the capital wanted to scrap the new nuclear plant, with 18% opting for its continuation. The complex is sited around 70 kilometers away from Taiwan's capital Taipei.
Taiwan Bureau of Energy's Deputy-Director General Wang Yunn-ming said in a recent interview that if the fourth nuclear power plant isn't completed and nuclear power generation is completely phased with the planned decommissioning, Taiwan's annual liquefied natural gas imports will swell to 20 million metric tons in 2025, from 12.5 million tons in 2012.
If the fourth plant goes online following the referendum, Taiwan will still need to gradually increase its LNG imports, to 15 million metric tons a year by 2025, Mr. Wang added.
"The government is boosting investments into green energy such as building more wind turbines and increasing the use of hydroelectricity, but all that are still insufficient to meet the short term need," said Mr. Wang.
Wind and solar generation, which Mr. Wang sees as complementary to natural gas, will rise to 10% of the energy mix by 2030, from 0.8% currently.

Over at Taipei Times, they push the industry line and consider that electricity prices will increase if the power plant is scrapped. We have heard that before, of course. Blogger Nuclear-News.net notes:


Tsui Su-hsin, secretary-general of the Green Citizens’ Action Alliance, which organized the protest, said the construction of the fourth nuclear plant is laden with problems and the government should stop its construction to prevent bigger risks in the future………….
Earlier that day, Greenpeace released a research report that said areas of northern Taiwan in the vicinity of the nuclear plant would suffer a potential economic loss of NT$33.92 trillion (US$1.13 trillion) per year if a nuclear disaster were to occur. It mentioned the Fukushima Daiichi nuclear disaster in Japan as an example, saying that compensation for the 2011 disaster has so far reached 2.64 trillion yen (US$26.77 billion). The nationalization of the Tokyo Electric Power Co. means that taxpayers have to cover the losses, it added.


Taiwan is to hold a referendum to resolve a 20-year argument over construction of a fourth nuclear power station, with many having deep reservations about nuclear development on the island and hoping the outcome will kill the project. Taiwan’s three nuclear plants, and the fourth, half-built power station, are all around 30 kilometres from the capital Taipei. The first was built 28 kilometres away, the second 22 kilometres. The fourth is under construction around 30 kilometres from the city. Tao Guangyuan, executive director of the Sino-German Renewable Energy Cooperation Centre, says such close proximity is shocking. To build three nuclear power stations that close to a city of millions of people is putting money before safety, Tao says. Worse still, Taiwan is prone to earthquakes.


Top image from a BBC video covering the Taipei demonstrations.

Like Japan, Taiwan is regularly hit by earthquakes. In September 1999 a 7.6-magnitude quake killed around 2,400 people in the deadliest natural disaster in the island’s recent history.
China Energy South Korea