Is there a hidden message in Dali's Bikini hydrogen bomb painting from 1947? Morohashi Eiji has the details around 12:30-14:00.

Wishing to find out more about Dali's inspiration around this time: The Triangle offers this quote:

During the post World War II era, Dali found a new inspiration in the person and the ideas of Werner Heisenberg and his Uncertainty Principle. Along with this came a renewed interest in religion and Dali coined a new term for this "Nuclear Mysticism". In his "Anti-Matter Manifesto" of 1958 Dali wrote: "In the Surrealist period I wanted to create the iconography of the interior world and the world of the marvelous, of my father Freud. Today the exterior world and that of physics, has transcended the one of psychology. My father today is Dr. Heisenberg."

The atomic bomb that levelled Hiroshima in 1945 had an enormous impact on Dali’s way of looking at the world. He was certainly among the first artists to recognise that the arrival of the nuclear age had fundamentally altered man’s perception of nature. In the decades to come Dali immersed himself in physics and produced dozens of works depicting objects exploded into their component particles...

In the year of Hiroshima he painted “Melancholy Atomic and Uranium Idyll”... In a bombed bunker intermingling atoms and electrons seem to draw a connection between aerial assault and baseball, one critic noting that the New York Yankees were known as the Bronx Bombers.

Dali also made a statue, the Sun God Rising In Okinawa as a tribute to the island.

When it was loaned to the island’s Urasoe City Museum for a 2008 exhibition, people called on the owner to give it to the prefecture permanently. (Photo from Okinawa daisuki na ningen)

Strange, but I cannot think of even a single American artist who compare to Salvadore Dali. Is there even one man or woman who stood up and made a case against nuclear weapons? 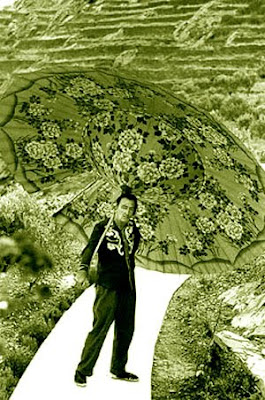 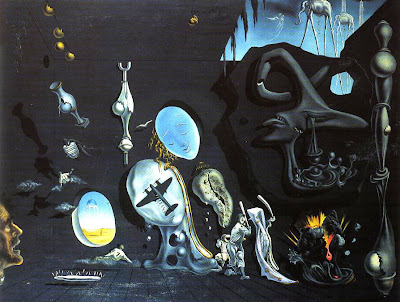 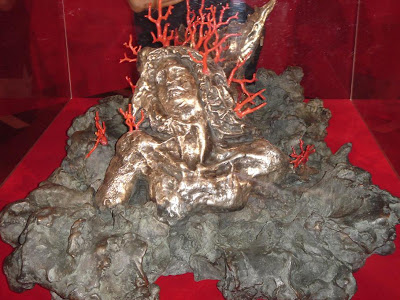 In high school, I spent a v. large sum on a huge volume of purportedly all of Dali's works--I was v. drawn to him. Then I gave it away because I thought he was too "dark" for me.

The volume did not include these atomic bomb influenced works. If they had, I would have understood why I was drawn to him, why he was "dark," and would have kept the book.

Again, I'm going to post on on your post (and copy it and send it via email to others).

I know of many American (including Japanese North American and Native American) writers and poets who have challenged nuclear weapons in their work.

A passage I have memorized from "Ceremony " by Leslie Marmon Silko. The blast at Alamogordo took place only a few hundred miles from her reservation:

“From that time on, human beings were one clan again, united by fate the destroyers had planned for them, for all living things; united by a circle of death that devoured people in cities twelve thousand miles away.”

The visual artists are even less well known. I can only name one offhand myself and I have studied arts and social change for two decades. The artist I am thinking of participated in a show I saw in NYC--"Into the Atomic Sunshine"--curated by Shinya Watanabe. Her name is Vanessa Albury and the work she did is called "Your Fears, My Hopes." It's an interactive multi-media piece in which viewers are asked to write their fears down on a piece of paper; burn it on a candle; take one of the "hopes" Vanessa wrote down on slips of paper as well as an orchid from a vase of them. Vanessa doesn't engage with what happened at Hiroshima directly, but instead with emotional fall-out. She knows of this through her own experience as a descendant of someone involved in the atomic bombing. (This is a situation of many Americans as hundreds (if not more) contributed in some way to the Manhattan Project--and the majority had no idea of what they were doing at the time).

Martin J Frid said…
Thanks for the links and the information, that's really interesting. The quote by Leslie Marmon Silko is a powerful reminder of what is really going on.
11:56 am, January 12, 2010

Pandabonium said…
Jacob Lawrence (1971-2000) - who was the first African-American to have works placed on permanent display in the New York Museum of Modern Art (1941) - did a series of paintings in the 1980s, which were inspired by John Hershey's book, Hiroshima.

Lawrence wrote:
"Is it not ironic that we have produced great scientists, great musicians, great orators, chess players, philosophers, poets and great teachers and, at the same time, we have developed the capability and the genius to create the means to devastate and to completely destroy our planet earth with all its life and beauty? How could we develop such creative minds and, at the same time develop such a destructive instrument? Only God knows the answer Let us hope that some day at some time, He will give us the answer to this very perplexing question."

35 sets of eight screen prints were put into a book with a signed poem by Robert Penn Warren.

TenThousandThings said…
Thanks for this. I went to a Lawrence retrospective at a museum in NY in the late 90's (I can't remember if it was at MOMA) but did not see any Hiroshima-related works.
6:31 pm, January 15, 2010

Pandabonium said…
The Hiroshima series by Lawrence was a commission from the Limited Editions Club of NY and only 35 sets were made - as part of a book. Most, I would guess, are in private hands so only occasionally go on exhibit to the public.
8:27 pm, January 19, 2010

Anonymous said…
Oh God, thank you so much for sharing these! I really enjoy Salvador Dali's paintings and this one was really new to me. I like that blue Kamagra Gel color on that painting.
4:58 am, October 07, 2010