January 26, 2010
Commuters arriving at and departing from Nagasaki Station yesterday morning were greeted with a peaceful gathering of over 200 people calling for the abolition of nuclear weapons and other weapons of mass destruction. Participants of the Peace Walk from Okinawa flew in from Okinawa yesterday just in time for the rally and continued their walk to Tokyo soon after it ended. 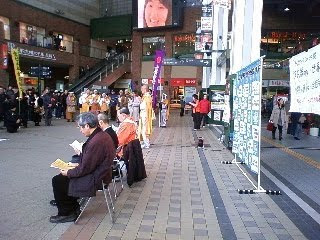 Photo taken by Hito
The Peace Walk from Okinawa is travelling across Japan for four months from Okinawa to Tokyo to raise awareness about two historical events taking place in 2010 that will significantly influence the future of our planet: the 2010 Review Conference of the Parties to the Treaty on the Non-Proliferation of Nuclear Weapons (NPT), and the 10th Conference of the Parties to the Convention on Biological Diversity (COP 10) in Nagoya.

The walkers, who are scheduled to arrive in Tokyo by May 3, Constitution Day, believe that our future lies in the fate of our biosphere whose biodiversity is threatened by continued military expansion in Okinawa and other parts of our fragile Mother Earth. 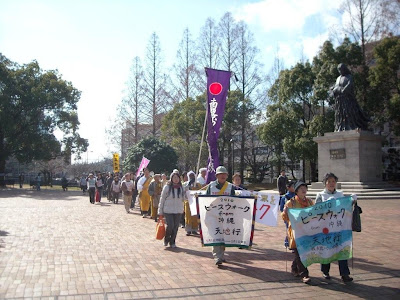 Peace Walkers leaving Nagasaki Station
(This photo is courtesy of the Peace Walk for Okinawa Blog)
Buddhist monks, hip hop musicians from Puerto Rico and Liberia, veterans of the Iraq and Vietnam wars, students, mothers and peace loving citizens from all over Japan collected messages of peace on the previous 71 day long Article 9 Peace Walk from Hiroshima to Tokyo in 2008. They hand-delivered these message to the participants of the Global Article 9 Conference to Abolish War which took place in Tokyo from May 4th-6th. 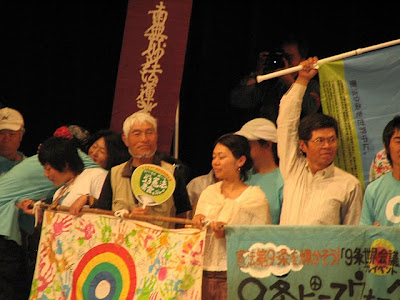