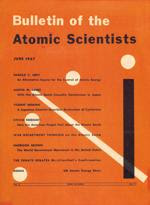 The Bulletin of the Atomic Scientists, which include some 19 Nobel laureates, has moved the symbolic "minute hand of the doomsday clock" back from five to six minutes to midnight:

We are poised to bend the arc of history toward a world free of nuclear weapons. For the first time since atomic bombs were dropped in 1945, leaders of nuclear weapons states are cooperating to vastly reduce their arsenals and secure all nuclear bomb-making material. And for the first time ever, industrialized and developing countries alike are pledging to limit climate-changing gas emissions that could render our planet nearly uninhabitable.

It is 6 minutes to midnight

Since 1947, the Bulletin of the Atomic Scientists, a monthly periodical that originated at the University of Illinois, has updated its "Doomsday Clock". It explains the clock's purpose thus:

The Doomsday Clock conveys how close humanity is to catastrophic destruction – the figurative midnight – and monitors the means humankind could use to obliterate itself. First and foremost, these include nuclear weapons, but they also encompass climate-changing technologies and new developments in the life sciences that could inflict irrevocable harm.

The Bulletin of the Atomic Scientists was established in 1945 by scientists, engineers, and other experts who had created the atomic bomb as part of the Manhattan Project. They knew about the horrible effects of these new weapons and devoted themselves to warning the public about the consequences of using them. Those early scientists also worried about military secrecy, fearing that leaders might draw their countries into increasingly dangerous nuclear confrontations without the full consent of their citizens.

In the twenty-fifth anniversary issue of the Bulletin, Eugene Rabinowitch wrote that the magazine's purpose "was to awaken the public to full understanding of the horrendous reality of nuclear weapons and of their far-reaching implications for the future of mankind; to warn of the inevitability of other nations acquiring nuclear weapons within a few years, and of the futility of relying on America's possession of the 'secret' of the bomb." Over the years, Rabinowitch wrote more than 100 articles for the magazine, most of them editorials.

This is big news because we generally have little or no idea about what is going on when it comes to nuclear weapons.

We live in a world that has moved beyond the Cold War (how so 20 years ago!), and of course rejected the "Mutually Assured Destruction" paradigm (that you may or may not have signed up to). Yet, we have not really found a way to strongly propose, in a democratic fashion, that it is now a good - no, an excellent - moment to demand that the countries that have them, should dismantle the nuclear weapons... How are we going to do that?
Hiroshima Nagasaki Peace progress

Pandabonium said…
Half of America's nuclear power plant fuel is coming from decommissioned weapons. While I applaud taking apart old weapons, I don't think nuclear power plants are a good idea. And I am afraid that what the world seems to be embracing as peace moves by Obama administration is really just spin on something that is economically motivated. I also note that the US is developing NEW nuclear weapons, as is Russia.

So, as you wrote - how are we going to do that? The US has so many such weapons and delivery systems, it could easily make a huge unilateral cut to start the ball rolling. If they are serious...
4:40 pm, January 16, 2010