Eco Points For Chrysler Jeep? You Must Be Joking

There are three ways to blog about this piece of news:

LOL, Jeep Patriot will be the first American car to qualify for Japan's eco point system. "Improvements" to the engine have "improved" its fuel efficiency from 10 kilometers to 10.6 kilometers per liter (25.0 mpg), according to the Mainichi. That's hardly an "improvement" ladies and gentlemen.

The Japanese government introduced the subsidy program for eco-cars in June last year, in which up to 250,000 yen will be provided for the purchase of a vehicle with a minimum required gas mileage. However, as most American automakers do not acquire product model approval in Japan, the government had decided to exclude U.S. cars from the program, due to the lack of reliable mileage data required for the screening.

Meanwhile, the Toyota Prius (44 mpg) or Honda's Insight (38 mpg) get, on average, almost twice the fuel efficiency. Jeep, an eco car? No way.

By the way, Consumers Report note (video), "The Jeep Patriot proved to be slow, noisy, and crude, and it struggled on our off-road course."

The second way I could blog about this is to just say, shake head, thumbs down, wishing I could refuse to pay taxes.

The third way is to ask, what kind of tax payer in Japan really thinks this truly is an eco car? In 2007, Autoblog Green noted that this was the best fuel economy of the class. Ho-hum. Strangely enough, there is an electric drive EV Jeep around, but it is not the one they are now trying to call an eco car in Japan. The Jeep Patriot EV would have made more sense, but then again, the automotive business is not so much about sense, is it.

Fuel efficiency standards in Japan and Europe are much stricter than in other parts of the world. Pew Center for Climate Change (pdf) notes that the goal of Japan's strict rules was to achieve an average fleet fuel economy of 35.5 miles per gallon by 2010. 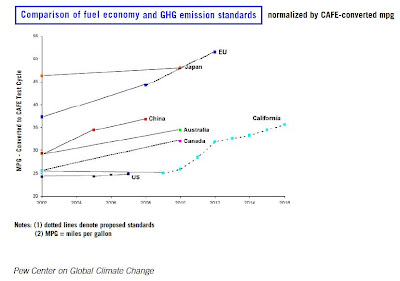 The Japanese rules do allow the Toyota RAV4 to be included as an eco car. Is this the reason that the Jeep can qualify?
automobiles Transportation