China is emerging as the next big really fast train center, with a new line opened on the Wuhan–Guangzhou High-Speed Railway line, going north-south, in late December 2009.

This is based on technology from Japan and Germany. The trains are now assembled in China, but if you have ever travelled from Tokyo to Nagano, you will recognize the CRH2 as the E2-1000 Shinkansen, and the CRH3 is based on the Siemens Velaro.

China has ordered the Kawasaki/Hitachi made trains based on my favourite, the E2-1000 series design, renamed it as CRH2, becoming the second country to import Japan's amazing Shinkansen trains after Taiwan's 700T series which began commercial operation in 2007 (there are some interesting modifications, such as more powerful motors to allow the trains to run at 300 km/h and as the Taiwanese railway infrastructure is based on the European system, tunnel diameters are larger than in Japan, allowing for a shorter engine nose length without causing a degradation in the aerodynamic performance when entering tunnels).

Bombardier, the Canadian company, and Ahlstom from France have also contributed to the development of fast train services in China, and Bombardier's CRH1 trains are based on designs made at the old ASEA plant in Västerås, Sweden, that used to make all Swedish trains (that I remember from my childhood travels!). If you like environmentally-friendly trains that can handle snow, the Regina is a very good choice.

The Chinese are clearly serious about fast trains, and billed the December 2009 event as the world's fastest train journey.

The 968-km line is part of a planned 2100-km long Beijing-Guangzhou High-Speed Railway. Experts are unsure if they will maintain the high speed and the cost of tickets, but China is clearly on the right track.

AFP noted that China "unveiled what it billed as the fastest rail link in the world -- a train connecting the modern cities of Guangzhou and Wuhan at an average speed of 350 kilometres (217 miles) an hour."

It is interesting that Chinese media seems to be able to discuss the new trains quite openly. Soon after the first run, news emerged that many Chinese felt the ticket prices were too high:

The Wuhan-Guangzhou high-speed railway has cut travel time between these two destinations to less than three hours. But at some cost. Priced between three to four hundred yuan, tickets are too expensive for many passengers. An online survey shows more than 30 percent of respondents think a railway trip should not cost so much money. More than a half say concerns over cost would prompt them to take standard, non-high-speed trains instead. But rail authorities say current prices are for a trial period only. And that they will be adjusted later, according, amongst other things, to how popular the trains prove to be.

Source: People's Daily Online High-speed trains too costly for many

In response to the comments, I'd like to add links to a brief report by Stuart Staniford, about transportation in China, and how quickly it is changing. Not only train lines, but also cars, trucks and airplanes are increasing in a very unsustainable way. The comments are worth reading too. Of the different investments China is making, trains is the least bad choice. 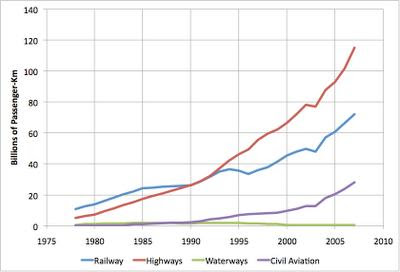 Pandabonium said…
I have recently changed my opinion of long distance transportation. It was only the discovery of cheap abundant energy that gave rise to long distance mass transport - before rail and steam ships people generally stayed put and only a very few would travel any distance, and that was not so frequent. Two centuries later, we think it is our birthright to take long trips quickly and cheaply.

A high speed train is energy efficient only when compared to its rivals. But is it really NECESSARY for large numbers of people to travel so much?

Might China have been better off in terms of health and sustainability if they had not chosen the economic model of industrial growth with its needs for transporting resources and labor all over the place? What if they had keep to more localized economies, kept bicycles, buses and light rail for the cities and shunned highways, cars, public airlines and large scale trains?

I realize this in heresy in the modern age, but I don't think China with bullet trains will be any more sustainable, happy or healthy that the USA will be without them.

Why do we, in Japan, need to shuttle so many people between Osaka and Tokyo every day? Or is it just another "want"?

Tom O said…
In the US people fly everywhere.

Europe and Japan, kind of 2 out of three of the big economic trinity. Japan - Shinkansen. Europe. The TGV of France, AVE of Spain (do the trip between Madrid and Seville and say trains are 'bad'!!) and ICE trains in Germany (that don't just feature that country). Why would China NOT want the same?

By the way, lets remember that it it is still relatively few people who travel per se. And, has been the case for many a year now. Some of us arrived in Japan 20 years ago (some by ship from Russia) although some who did are still there (nod to resident of Hanno).

Travel also = trade. Columbus and Magellan weren't on those blind journeys 500 years ago to look for prospective tourist resorts.

My point is that the amount of energy available in coming years will be far less than is available today and it must also be cleaner than is used today.

The energy used for travel will be less along with everything else, and IMO the percentage of energy allocated for travel must also become less, since there are more important uses for it.

China is building infrastructure which at some point it will not be able to power.
6:27 pm, January 19, 2010

Tom O said…
I'm not disagreeing with you, by any stretch!

Its just that China has its agenda (ie COP 15 for starters) and is ploughing full steam ahead (pun intended) with their aim to be the new 'Japan'. Coal fired power stations (just try not to work where they get the coal...) + imported Bullet trains, all 'progress'. Consequences? Pah!! Not forgetting the new line to Tibet in the scheme of things. Plus, theirs and the world's population is only going to increase - MORE demand.