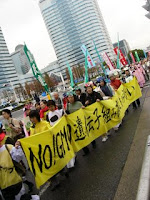 Consumers in Japan are strongly opposed to genetically modified foods, but the previous governments here have been reluctant to cause trade friction with the United States over the issue.

The problem is, the corporate world is running the show, with St Louis-based Monsanto Co. in particular calling the shots in Washington. The USDA, the FDA, and the USTR have key people in charge who have been more than friendly with the biotech giant in the past, notes the Organic Consumers Organization.

Now Monsanto is making a huge push to introduce research and development in wheat, a crop that Japan imports from North America (and Australia) through a complex state import scheme.

The main association representing the flour millers here have told the Americans that there is no reason for them to believe that Japan will accept GM wheat.

The No! GMO Campaign has compared the results of this questionnaire in December, 2009 to our previous one in March, 2004. At that time, we sent the questionnaire to 15 companies, and received replies from 7 different companies. In 2004, all 7 replied that GM wheat should be labelled. 5 out of 7 stated that they did not want to import GM wheat, while this time, not a single company replied that they would like to import GM wheat. We are concerned about the fact that several companies stated that they do not know about the risks associated with GM wheat.

We also received a letter from the person in charge at Japan’s Flour Millers Association. He noted that the answer to questions 1 and 2 is yes, and that in response to question 3, the most important issue is to “obey the law.” As for question 5, he noted: “We have to expect that cross-contamination of GM crops will happen.”

Also, he noted: “Under the present circumstances, with all the doubts about safety and the environment that the consumers in Japan have, including the effect on the human body from GM foods, GM wheat is included among the items that are not acceptable for the Japanese market. We believe that it will be difficult to know if the wheat flour and products are made with GM wheat or not, but such products would have to be clearly labelled.”

Wheat is something that is essential for our daily sustenance, just like rice. Together with citizen groups and consumer organizations from around the world, we will continue to carefully monitor the misguided attempts to introduce GM wheat.

Question 1: Do you know about genetically modified (GM) food?

Question 2: In May 2009, 10 wheat-related associations, including the American, Australian and Western Canadian wheat associations, announced that they request commercial cultivation of GM wheat as soon as possible. Did you know about this?

Question 3: Presently, there is no GM wheat on the market, but should it happen in the future, and it is sold [in Japan], do you think GM labelling will be necessary?

Question 4: In the future, should GM wheat become commercially available, will your company import it?

Yes, we want to import it 0

It depends on the demands of the [Japanese] consumers (5 companies)

Question 5: Are you aware of the cross-contamination and environmental pollution which can be expected in case GM wheat is cultivated?

In Canada, reason seems to prevail, with the Canadian Wheat Board noting that:

"We know that this is potentially the wave of the future but right now we're just not there," said Maureen Fitzhenry, spokeswoman for the Wheat Board, which holds a government-granted monopoly on sales of Western Canada's wheat and barley. Consumers in Europe and Japan are wary of genetically modified foods... The Wheat Board, which opposed Monsanto Co's application for a herbicide-tolerant GM wheat in 2004, would also want to see a greater benefit, such as resistance to fusarium disease or improved yield and quality, Fitzhenry said. At present, there's no way to effectively segregate GM wheat from non-GM wheat, which would be another condition the board would want satisfied, she said. 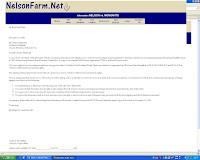 I cannot understand why we should let one single company take control over such an important food source. Farmers should protest this invasion on their rights, just as consumers are rejecting it. GM wheat, with patents and contracts that would make it impossible to save seed and make sure Monsanto's "proprietary rights" and abhorrent technologies do not end up in our daily bread, must be stopped.

I'll add more later if possible, but blogspot/google/whoever is making access to my account very difficult tonight. Is anyone else having trouble?
Consumer rights Food Food safety GMO NGO

Thank you for this excellent report. There's so much going on with Monsanto's attempt global takeover of all seeds and agricultural production--it's hard to keep on track.

I am so glad and proud of Japan's position in favor of health.

There's a recent US documentary called "King Corn" about how GMO corn is in so many US food products. Americans are the experiment for GMO foods and with obesity and so many other health issues, it's not a favorable outcome.

Regarding access to your account--it may be Jen, Kim, and I accessing Blogger at the same time you are since TTT and Kurashi are now connected. When one of us open our blog, Kurashi is automatically opened. I share this here for others who have interconnected sites. I'll send emails to all of you when I log on/off, as a courtesy!

Unknown said…
Thank you for raising awareness of this issue. Australian government has been quietly pushing through GM patents and cultivation over the last 12 years (includes flower cultivation, aka the recent 'blue rose' released on Japanese market by Suntory).

European countries including UK won't touch GM (supermarkets won't sell it) and Monsanto are trying every way they can to sidestep or change the legislation. If this means dumping GM crops/seeds on Asian and third world markets (and controlling research body funding and committee recommendations), and 'hiding' GM product in non-GM food base/processed foodstuff, so much the better profits for them.

Once these crops are released there is no going back.

I will look out for the 'King Corn' documentary. I sincerely hope that the seed banks are stockpiling non-GM modified material before it is lost.
9:54 pm, February 04, 2010