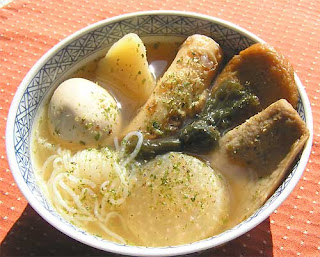 TV Asahi has a food program on Sunday evenings at 23:00 called Eco Meshi (エコめし） as part of their "Earth Restaurant" series. Eco of course is the term used for anything connected to environmental matters, while meshi means food in a more casual reading of the 飯 kanji also found in the polite word gohan （ご飯).

Several of their other programs have been educational and fun but last night they introduced oden, and especially hanpen, as an environmentally friendly original Japanese food. 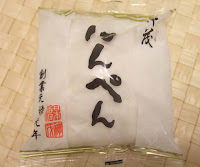 Hanpen, as shown by TV Asahi, is a processed product made from fish meat, and the January 17 show showed how it can be made from shark meat and other parts of the shark, mixed with sugar and starch added. The square patties are white and very tasty - if shark meat is your thing. Many people will probably have difficulties understanding how shark meat can be considered an eco product.

Shark, or same 鮫 is caught accidentally when the huge fishing fleets angle for tuna (maguro 鮪） on long lines with baited hooks. TV Asahi explained how the fishing boats bring back shark that have been caught this way, and also mentioned that there are food supplements made shark liver oil. But generally, shark meat is not popular, and most of the sharks are discarded - unless they are processed as hanpei for oden. 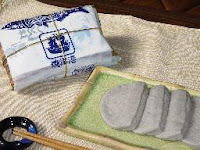 I like oden, especially in winter, when it is a tasty and "warming" food, and it is also inexpensive. Oden can be anything from eggs and tofu to daikon or potatoes, and many other processed fish meat products. In my food safety ranking book I reccomend oden-style foods like konnyaku (made from the Konjac root, a perennial plant) and the hanpen I recommend is made in Fukuoka from other types of fish, like sardine and cod, and certainly not shark!

The logic that shark meat hanpen is "eco" was based on the mottainai concept, i e the idea that we should not waste anything, and that using a by-catch in this way is a clever way to make use of marine resources. I couldn't disagree more. The tuna fleets are already causing huge damage to ocean ecosystems, and the sharks are threatened not only in this way but also by the cutting off of their fins for shark fin soup, so popular in China. Unfortunately, TV Asahi ignored the opportunity to invite a guest from, say WWF Japan or Greenpeace Japan, organizations with knowledge about ocean issues that have staff that could have provided the other point of view.

Meanwhile, do enjoy oden. It is a great food for winter, and it can be easy on your wallet too.

Blue Lotus, a blog I like, has some great posts introducing oden!
Food

Brett Rasmussen said…
I think you mistakenly swapped "udon" in for "oden" a couple of times in this article, just a heads up!

I very much agree with your assessment of this so called "Eco" product.

Unfortunately some people do not understand that the real way to "mottainai" is to not exploit the resource in the first place.
1:48 pm, January 19, 2010

Pandabonium said…
I like oden too, especially on a cold winter day.

The shark variety should be eaten with hashi made from left over trimmings from rain forest logging. After all, the trees are already cut down...
5:32 pm, January 20, 2010

Pandabonium said…
Watch the salt. K just brought home a package for making oden and it contains 2,480 mg of sodium. One serving would have 620 mg. That's over half of my daily limit. Looks like I need to learn to make it myself.
3:44 pm, January 21, 2010

Martin J Frid said…
P, if the one serving is your main meal of the day, such as supper, would that sodium level really be a problem?

Making it yourself would be a solution, yes. If you don't care for the salt, you could find a better taste using other flavours including sesame sauce and don't forget the apple they boil with the veggies - for sweetness.
8:42 pm, January 21, 2010