Japan Airlines: A Cultural Assessment As We Deal With Peak Oil And Climate Change

January 21, 2010
JAL, Asia's largest airline by revenue, has filed for bankruptcy. Japan Airlines has operated since 1951 on routes to America and also Europe.

It seems a great era is about the end. Once great airlines like BOAC, Pan Am or TWA are of course no more. Air France has merged with KLM Royal Dutch Airlines, and Lufthansa has acquired Austrian Airlines. When will KAL, Korean Air (based in Seoul) or China Airlines (based in Taiwan) face the new realities? And what about Air China, based in Beijing? 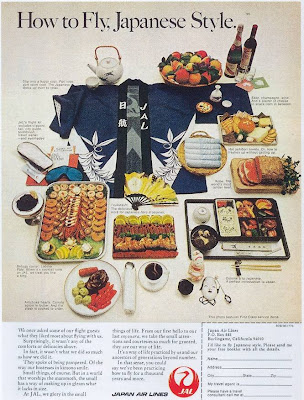 Easy jet travel, i e convenient flights, wonderful service with meals and drinks, in flight entertainment - it could all end soon. We have taken it for granted for a long time. But with peak oil and climate change worries, the never-ending wars in Iraq and Afghanistan, and a long adjustment to economic realities here in Japan, no wonder people are a little reluctant to travel abroad. How different from 20 years ago, when I first lived in Japan!?

"How to Fly, Japanese Style.

Slip into a happi coat. Part robe, part sports coat. The Japanese dress up even to relax.

Sake, champagne, wine. And a platter of cheese to snack from in between.

Hot oshibori towels. Or, how to freshen up without getting up.

Kobe. The world's most tender beef.

Beluga caviar. Lobster plate. When it's cocktail time on JAL, we treat you like a king. Cuisine à la Japanese. A perfect introduction to Japan.

Artichoke hearts. Carrots aglow in butter. And the steak is cooked to order.

...At JAL, we glory in the small things of life. From our first hello to our last sayonara, we take the small attentions and courtesies so much for granted, they are our way of life.

It's a way of life practiced by us and our ancestors of generations beyond number.

In that sense, you could say we've been practicing how to fly for a thousand years and more." 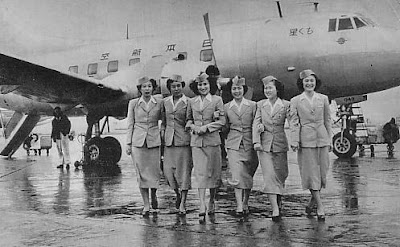 JAL is not so different from Scandinavian Airlines or Swiss Air. In a deregulated era, the concept of a "flag" carrier or a national airline has ceased to be functional, and JAL has to bite the bullet.

I don't get to fly much these days. I have visited some 25 countries over the years for work, as I had to attend conferences and all kinds of meetings. At one point, I did love the thrill. I also had several opportunities to personally fly small aircrafts, both in Sweden and in the United States. As I made that huge, long turn, I got to love the view of Mt Chasta, a very special place.

How are we going to deal with the changes that are clearly ahead of us? Are we going to educate the next generation to believe in peace and understanding, rather than in confrontation and cut-throat competition? JAL was for a very long time a model for young ladies and pilots who wanted to learn English and look great.

Can we find better models for spiritual growth, today? How do we tell young people that no, there may not be so many opportunities for hard work on huge jets, you should prepare for an era with more local services, less easy jet travel. But you should keep your international focus, and not forget about the world...

The bankruptcy represents a humbling outcome for Japan's once-proud flagship carrier which was founded in 1951 and came to symbolize the country's rapid economic growth. The state-owned airline expanded quickly in the decades after World War II and was privatized in 1987. 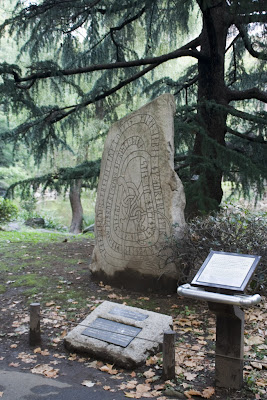 Meanwhile, it was not so long ago, in 1957, that SAS was the first airline to offer "Round the world service over the North Pole" via the North Pole shortcut Copenhagen-Anchorage-Tokyo. The 1955 memorial is a rune stone erected in memory of the first direct flight from Scandinavia to Haneda Airport, Tokyo, Japan...

Tom O said…
Lest we forget it was only in 1989 that flights to Japan from Europe from Anchorage ceased. Once the Wall came down and the 'Soviets'-Russians realised the large foreign cash that could be earned from their air rights. Pre '89 Europe > Nihon was something like a 17-18 trip and Anchorage airport was a thriving stop-over. Virgin Atlantic to Tokyo in 12 hours then became the preferred option from London. And for the Russians - ££$$.

China & Bullet trains. Trains have been around longer than planes and will obv always be around in some form. Imagine if the TransSib was upgraded in the same way.

Finally, airplanes = transportation, its not travelling and engaging - like trains. Even very fast ones imported from Japan...
1:00 am, January 22, 2010

Martin J Frid said…
Tom, these expensive flights with JAL 20 years ago must have been for others than you and yours truly. I reached Japan with Malaysian Air in 1988. Aeroflot was a very cheap option back then, as the Berlin Wall had fallen. I think my last long-haul might have been KLM.

For flights to the UN Codex conference in Jeju and then the endochrine disrupter talk in Seoul, Korea, I do have to check, can't remember... Asiana maybe?
1:27 am, January 22, 2010

Tom O said…
Well, Asiana is Korean ja... An 'endochrine disrupter' talk, not heard the term before (but from what I can see if one is a parent..).

All those flights to COP15, irony.

As you say there is a stat somewhere where flights cost less than they did 20 years ago, ie fares have stayed the same or decreased despite commensurate inflation. Long haul 20 years ago, not quite now - with the cost and options nado.

Pandabonium said…
As a private pilot who comes from a family of pilots and aeronautical engineers, I do love airplanes. Can't say I enjoy riding in the back much. As Tom said, it's just transportation.

Whether or not, in balance, aviation has advanced the human condition is an interesting question. As with many endeavors it began as a dream and all too soon became a means to make money
and to wage war. It has had many global cultural impacts as well - good and bad.

In an energy constrained, climate changing world their days are numbered. Even with the more efficient Boeing "Dreamliners" that JAL will start receiving later this year (if JAL is still around) they will not be profitable. The rising price of fuel will see to that soon enough.

I say, let JAL go. Spend some money to ease the impact on employees and retirees. Saving JAL will just lead to more losses down the road and punish their competitors unfairly.