Sunk In Rethoric: The Ady Gil 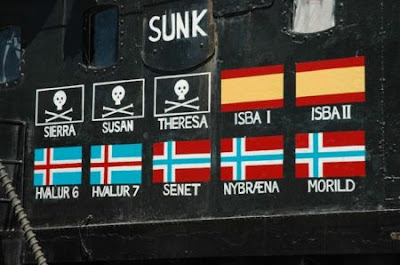 James over at Japan Probe notes:

Being no expert on ships, I can’t really say for certain which vessel did the “ramming” in this case. However, judging from the wake coming from the back of the Ady Gil, it is very hard to believe Sea Shepherd’s claim that the vessel was “motionless” and “dead in the water” at the time of the collision.

On Friday, NHK World says this (adding that "crossbow arrows" have been found near the Ady Gil):

Sea Shepherd Captain Paul Watson said on Friday that the Ady Gil was abandoned while being towed by another of his group's vessels toward a French Antarctic research base. He said the organization's remaining 2 ships are continuing their pursuit of the Japanese fleet.

Garrett said the request was filed on Thursday through the Australian Embassy in Tokyo. Garrett also said he's disappointed by Japan's lack of response despite Australia's repeated calls for a stop to the country's research whaling. The minister again suggested that the Australian government will seek legal action if diplomatic efforts fail.

The collision is receiving wide media coverage in Australia, where anti-whaling sentiment is strong. Some people are calling on Australia's government to take tougher action against Japan and to dispatch vessels to monitor its whaling activity.

Sea Shepherd was accusing Greenpeace for doing nothing to stop whaling, now this. While Greenpeace tried to engage the public in Japan and make the case against whaling, I fail to see how Mr. Watson has done anything to further the cause against whaling. He might have all the right arguments, but his tactics are not going to win over a lot of people here in Japan. Having said that, I did have some hope that he was more intelligent and would not let the Japanese "research" ships win this particular battle in such an easy way. "Hippie-boat" no more.

Sea Shepherd has engaged in violent tactics against a number of countries so far. The Morild in Norway, the society claims, in an editorial at their website, is a case in point:

The Norwegians are the most blatant violators of the regulations of the International Whaling Commission. The Norwegians, unlike the Japanese do not pretend to kill whales for research. They are thumbing their nose at international law.

The Sea Shepherd Conservation Society has been the most aggressive opposition to illegal Norwegian whaling. In 1992, our crew sank the pirate whaler Nybraena at dockside in the Lofoten Islands. In 1974, our crew scuttled the pirate whaler Senet in Southern Norway. In 1998, the pirate whaler Morild was sunk. In 1974, the Sea Shepherd ship Whales Forever disrupted the summer whale hunt and engaged in a confrontation with the Norwegian Navy. Despite being rammed, depth-charged and fired upon by the Naval vessel Andenes, the Whales Forever successfully avoided capture. Sea Shepherd continues to aggressively oppose illegal whaling activities in Norway.

Whatever happened to education and quiet persuasion, civil disobedience and nonviolent direct action, and targeted communication via mass media?

Update I: Ten Thousand Things notes that Hollywood stars are now supporting Sea Shepherd, while in the 1950s the best in Hollywood spoke out against American domestic repression of democracy; many lost their careers as a result... And, thanks for the link to Julian Lennon's Whale Dreamers official homepage.

Update II: Pandabonium notes that Australian Broadcasting (ABC) has a video on its website which was taken from the Shonan Maru 2 and released by the Institute of Cetacean Research (sic), which, ironically enough, clearly shows the latter intentionally turned hard to starboard, deliberately ramming the Ady Gil which was practically dead in the water:

Thanks for the link.

I think civil disobedience can result in physical confrontation sometimes. But the point of nonviolent tactics and strategy is not to do the attacking, but to submit to being attacked without retaliation.

I remember vividly seeing news reports as a young child in the 1960's of US Civil Rights activists being beaten, attacked with dogs, fire hoses, spit upon, pelted with rocks and bottles.

So the monitoring of whale hunting ships--even to the point of creating so much "creative tension" that the oppressor attacks--would be okay under nonviolent tactics. The Norwegian Navy's attack on the Sea Shepherd ship demonstrates the violence of oppressors.

That said, some people in Japan are repeating your assessment to me--that Sea Shepherd may be perceived as behaving too aggressively to win over large numbers of people.

In my own instance, although I don't condone aggressiveness, I can understand Mr. Watson's desperation after years of more gentle tactics not working.

I am unable to look at graphic photos and videos of whales and dolphins being violently killed or PETA footage of animals being killed by factory farms--so I am even grateful to people in Greenpeace, the Humane Society, and whale and dolphin support organizations like Sea Shepherd who must witness such extreme and cruel violence regularly, as well as deeply know the beauty and magnificence of whales and dolphins.

But in the case of Norwegian and Japanese whale hunters--they are not going to respond to aggressiveness. They are morally and emotionally sick to engage in such unnecessary and sadistic violence towards beautiful animals. It's not about food or traditional culture. It's about ego and power. They want to subdue, hurt, and destroy beautiful living creatures because of something empty and powerless inside of themselves.

So the Sea Shepherd's engagement of their pitiful egos is just going to inflame their sense of separation and power over the whales.

In this case--as Einstein said--the problem can't be resolved at the level of consciouness that created the problem. We have to get to a higher, more intelligent and mature level beyond the chain of violence--as you know--you bring so many windows into higher and more creative levels of thinking.

This is what Julian Lennon and the people involved in "Whale Dreamers" are trying to show people too.

Pandabonium said…
Australian Broadcasting (ABC) has a video on its website which was taken from the Shonan Maru 2 and released by the Institute of Cetacean Research (sic), which, ironically enough, clearly shows the latter intentionally turned hard to starboard, deliberately ramming the Ady Gil which was practically dead in the water.

Sea Shepherd prevents whales from being killed. That is their strategy, whatever you think of it. Taking pictures and waving banners doesn't seem to work.

It is not "violent" - but it is definitely in-your-face harassment. (And it has been effective in saving whales and costing whalers money.)
6:51 pm, January 12, 2010

Pandabonium said…
Link to ABC page with the video:
collision video
- beneath the photo, click on "Video: Japan's Institute of Cetacean Research has released vision of the collision. (ABC News)"
6:56 pm, January 12, 2010

TenThousandThings said…
Thanks for the update! If it works and if they're only in-your-face, then I support and appreciate their doing this kind of hard work on behalf of millions of people around the world who want whale hunting to stop now. I hope Sea Shepherd wins their lawsuit.

Do either of you know the latest on the Japan Greenpeace activists who were arrested last year?

Martin J Frid said…
Thanks for the comments,

Greenpeace Japan published an 80 page booklet in December 2009 about the details of the case. They also have a blog with updates, challenging the official viewpoint that this is "research" and how it differs from commercial whaling.

In fact, I would go as far to say their Japanese information is excellent, and a good way to communicate to the Japanese public.