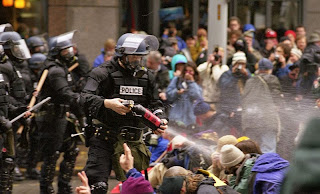 If Japan goes ahead with the TPP negotiations, as planned in Brunei from August 21, what do we have to expect? Four years of "gag order" and noone is to know what expired?

Lessons learnt indeed from the WTO, and Doha round (that was supposed to take care of concerns from developing countries). By 2008 that mirage had expired.

But let's remember Seattle in 1999. The US put tanks on the ground, and used tear gas, and basically closed down any public debate. I was there, I couldn't go to the meeting place where I was supposed to be, the entire city was a war zone.

Four years of silence? Why 4? Why not ten or twenty. We all know the intention is to close down public services, insurances, agricultural subsidies, and no concern for public health (or animal welfare). What about climate change? Biological diversity? Destroying jobs?

This TPP has no such considerations for issues negotiated over a long time, some of it in the UN frame work. Now suddenly, we have this crazy trade pact among countries with not much else in common. 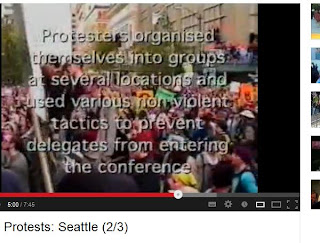 No wonder they want to keep it secret.

Members of the ruling Liberal Democratic Party (LDP) have been baffled by a gag order on the contents of the ongoing Trans-Pacific Partnership (TPP) free trade negotiations. The gag order has been placed on the Japanese government, making it difficult for LDP lawmakers to learn what's going on behind the scenes.
Once a TPP free trade deal is sealed, it requires approval of the Diet for its ratification. Japan has signed a gag order pact with the United States and 10 other TPP member countries on the contents of the TPP negotiations, which will be kept secret for four years after the pact goes into effect.
During a meeting of an LDP panel on protecting national interests at the TPP talks on Aug. 6, government officials said the gag order is very strict and unheard of in past trade negotiations. They sought LDP lawmakers' understanding of the gag order which bars them from elaborating on the TPP negotiations.
On July 23, the Japanese government participated in the TPP negotiations for the first time and signed the gag order deal during the TPP's Malaysian session. Government officials say the contents of the gag order per se are under the gag order. But a mid-level LDP lawmaker said it is very dangerous for Japan to make a decision on a TPP agreement without knowing the contents of the negotiations. The lawmaker said Japan should stress that an option not to ratify the proposed agreement should remain a possibility.
The reason behind the strict gag order is a lesson from past multilateral negotiations. The Doha Round of global trade talks under the auspices of the World Trade Organization (WTO) was launched in 2001 but broke down in 2008 due to an escalating rift among member countries. House of Representatives member Koya Nishikawa, chairman of the LDP's TPP committee, said, ''TPP member countries think they can conclude a deal by negotiating in secret.''
The LDP has adopted a resolution seeking the exclusion of five vital items such as rice, wheat, meat and pork from a list of goods for tariff elimination and wants to rigorously check the negotiation process. Some TPP member countries have concluded gag orders with industry leaders to convey information and get their reactions while some other countries have shown negotiating documents to a small number of influential lawmakers to get their assessments. But the Japanese government has not decided how to properly communicate with the LDP.
For now, the LDP plans to designate Secretary General Shigeru Ishiba as point man on the TPP case with the government. He will conduct intraparty coordination whenever important issues come to the fore. Ishiba told a news conference on Aug. 5, "There will be a single point of contact but I don't make decisions on everything. I want to have debate in detail."

Tom O said…
Btw, we had our own 'little' version of Seattle in 1990 - the Poll Tax riots. This of course pre-internet, I in Tokyo and it was difficult to get a real sense of what going (that it inspired by Thatcher was kind of enough though. Thatcher - friend of Pinochet and Reagan). Met people since, when back in London, who were there. Who didn't HAVE to be but...

Suppression - oppression, is there ANY actual difference in those words?

Pandabonium said…
I remember the lack of transparency during the NAFTA dealings under (supposedly "liberal") Pres. Clinton in the US. Factories and jobs soon crossed the borders.

TPP - same old stuff. Secret deals to help the rich get richer in the name of "free trade". Which really means privatize profits while socializing costs (as with the regressive sales tax hikes).

Time to ramp up our community gardens - we're going to need them!