Refrigerators: We just assume they work, no matter what. Steaming hot summer days, storms, snow, a lovely spring day like today (with no power blackout, since TEPCO has such things under control, for the time being).

Try to imagine how you will manage without your trusted fridge. Or better still, what about the freezer?

Invented by Swedish engineers in the early 1920s, the electric models back then were actually very energy efficient. Later on, the machines became a part of the status apparatus that signified that you had made it, and graduated from the ice box crew. Top image shows a number of models that were common in Japan from the 1920s. 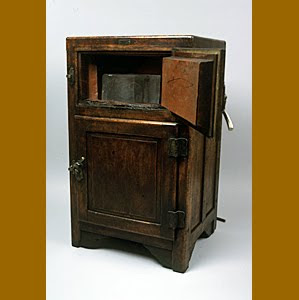 In fact, just a day or two before the March 11 earthquake, I visited the Showa Kan Museum in Kudanshita, Tokyo, and they had a Japanese ice box unit on display, as part of their effort to show what life was like in the pre-WW2 era of the 1930s. Here is how they describe the ice box on display:

Blocks of ice were stored in the upper compartment, and there was a hose to deal with water from the melting ice. How nice, what a simple and logical unit. It was mostly used by upper-class families. Isn't that the core of the problem? How do we make the power-down democratic...?

How are you going to deal with the rolling blackouts?

Your trusted fridge will be turned off for hours. Is your food safe? How will it change your shopping habits?

Video: "Makes it safe to be hungry" CM for General Electric refrigerators. Note that this is the same company that provided the design for the Fukushima Nuclear Plant No 1, back in 1967. The links between the companies such as Toshiba and Hitachi with GE and other major power companies around the world, make for some very interesting reading.

The chief executive of General Electric says his company will help address the problems at the Fukushima Daiichi nuclear power plant. Jeffrey Immelt met with Japanese economy minister Banri Kaieda on Monday, along with Hitachi President Hiroaki Nakanishi. General Electric and Hitachi are partners in the nuclear power industry.

Immelt offered condolences to those affected by what he called an unprecedented disaster, and said the US conglomerate is willing to provide whatever assistance is necessary to deal with the situation. He told Kaieda that GE hopes to help restore the cooling functions at the plant and neutralize the radioactivity once the plant is stabilized.

Thirty-five years ago, Dale G. Bridenbaugh and two of his colleagues at General Electric resigned from their jobs after becoming increasingly convinced that the nuclear reactor design they were reviewing -- the Mark 1 -- was so flawed it could lead to a devastating accident.

Watch: Radiation Reality CheckQuestions persisted for decades about the ability of the Mark 1 to handle the immense pressures that would result if the reactor lost cooling power, and today that design is being put to the ultimate test in Japan. Five of the six reactors at the Fukushima Daiichi plant, which has been wracked since Friday's earthquake with explosions and radiation leaks, are Mark 1s.

"The problems we identified in 1975 were that, in doing the design of the containment, they did not take into account the dynamic loads that could be experienced with a loss of coolant," Bridenbaugh told ABC News in an interview. "The impact loads the containment would receive by this very rapid release of energy could tear the containment apart and create an uncontrolled release."

In Japan, foods such as milk, butter and cheese are carrying labels that say you should keep said items at 10 C. Other foods, especially fresh meat and fish, are not so safe at that temperature. In case of longer blackouts, if you are in doubt, throw the food out rather than take the risk of getting food poisoning.

(Throw it out as in, hope you have a compost, and that you know how to use that food waste to grow your own stuff)

Be that as it may.

From another point of view, how about this. From a Buddhist point of view, where we do not blame others, how are we going to explain these events? We are used to dealing with local matters. Do we have the tools to deal with large-scale events? It seems to me that we should be able to deal with global, universal events. The small problems we may face, such as power blackouts, are rather insignificant. No fridge? I think we can do better!