Showing posts from April, 2005
Show All

The IGN EcoStudy Group was started in January, 1997 by a small group of people interested in meeting informally to discuss current social and ecological issues. Meetings are held on a more or less monthly basis, usually on the third Friday, although the date varies from month to month depending on the participants' schedules. The group focuses mainly on Green issues widely construed, including environmental problems, human rights, feminism, anti-racism, globalization, alternative politics / economics, labor issues, fair trade, cooperatives, indy media, and the like, but there are no limitations on themes. Anyone is free at any time to volunteer to give presentations or to propose possible topics for future disc…
Post a Comment
Read more

The Voice (Jupiter) by Ayaka Hirakawa

April 26, 2005
This song is amazing... i hope you can click, and hear it. tell me what you think, I appreciate comments.

Ayaka was just an ordinary music student, then she released this song... and in Japan, everyone went for it! Based on Holst's Jupiter, she has created a great pop/rock song, with a wonderful feeling. It became an instant number one hit in Japan:

What is your "Ecological Footprint"?

April 24, 2005
One way to think about environmental issues is called the "Ecological Footprint". It means, how much impact do YOU have on our precious Earth? Your food, your way of living, your hobbies... everything will make a "footprint" on Earth, both in good ways and bad.

The problem is that some people have a really huge footprint, while others are not getting enough... Our planet is not able to sustain the lifestyles of many of us.

Here is the online quiz to measure your impact on the Earth's resources. It is fun and easy. Start by clicking at the World map, to indicate what country you are living in:

(You may have to update the page once before it works...)

Actually, when I did the quiz, I got the follwing result: "IF EVERYONE LIVED LIKE YOU, WE WOULD NEED 2.1 PLANETS." Hmm! That is really not so good. 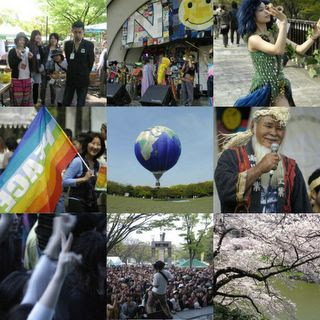 April 22, 2005
Earth Day is a big event in many countries, including Japan. Many events are going on April 22 all around Japan. It is becoming a truly global celebration of Mother Earth!

Please click on the "Earth Day 2005 in Japan" link in the title of this blog for more information.

Also, here is a link to events the following days in Tokyo:

April 20, 2005
More than 10 million people in 80 countries recently took part in a Global Week of Action on Trade. They are all saying ‘trade justice, not free trade'.

In the Philippines, many people staged a mass action at the Japanese Embassy in Manila to protest the ongoing negotiations for a bilateral trade agreement between the Japan and Philippine governments. The agreement, called the Japan-Philippines Economic Partnership Agreement (JPEPA) is due to be completed and signed in July 2005.

Joseph Purugganan of Focus on the Global South said:

"No economic partnership will ever happen with Japan taking advantage of our weaker industries and natural resources, while the Philippine government is happy with just piecemeal job creation for Filipino nurses in this blatantly lopsided trade deal."

In Japan, many Non-Governmental Organizations have signed a petition against the proposed WTO negotiations, planned for December, 2005 in Hong Kong.
Post a Comment
Read more

April 18, 2005
Spring is the time when nature all around us comes to life once more. The trees near my apartment are suddenly bright green. It is also the time when newly harvested will be sold again. The fresh flavour of a "first-picking" Japanese green tea is really something special.

Modern science is beginning to understand more about the health properties of tea. Green tea in particular, has ben found to contain antioxidants called cathechins, that help strengthen the immune system and aid in fighting free radicals. Citizens of Uji and Shizuoka, the areas in Japan where most green tea is harvested, have among the lowest cancer rates in the World.

In Asia, teas are seen as medicine. The understanding of the five elements (also called five phases) of wood, fire, earth, metal and water, as well as the yin-yang theory, can also be applied to food and drink, including tea. In fact, the understanding is really profound. The basic idea is to harmonize properties and tastes on the basis of yin …
Post a Comment
Read more 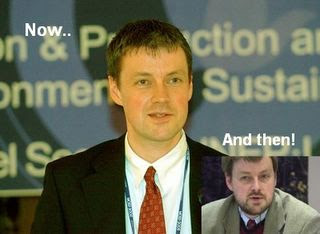 Before and after... what has happened to me? "Then" was a big EU meeting in Lund, Sweden in April 2001. Actually, I feel much healthier these days 4 years later. I think we really need to think about our lifestyle, and the stress of our work, to avoid getting into serious conditions. This is also true for consumer activists!
1 comment
Read more

April 12, 2005
The World Expo in Aichi, Japan has chose "Nature's Wisdom" as its (beautiful) main theme. It refers to the need for the World to be in tune with the wisdom of nature and seriously address environmental issues. Expo 2005 offers a glimpse of where people from around the world think the Earth will head in the coming years.

I have to admit that I was first rather skeptical about this (hrm) ambitious idea. How could Japan, such a major polluter and hardly known as a "environmentally-friendly" society dream up such a fuzzy theme? Well, in many ways, Japan (as the World's second largest economy) must lead the way. And do they know it! Thus, a few weeks after the Expo has started, I'm beginning to notice that the Japanese are actually serious about this... 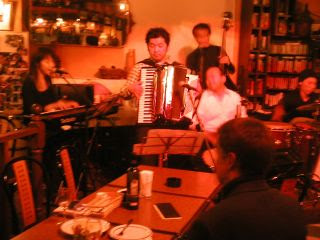 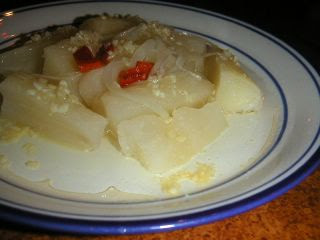 Yesterday, I went to a Cuban restaurant in Roppongi, Tokyo. My friend Takahashi-san knew a good Latin band, and we really enjoyed the live music. The photo shows a cassava dish. Cassava is a really important food in many developing countries, but I had never tried it before. The cassava dish we had was boiled cassava from Thailand with lots of garlic and butter. It was delishious.

Cassava rice (landang) is a popular food in the Philippines. Landang retains much of the protein of the cassava root. It is used in the Philippines as a substitute for rice or maize. Originally, cassava comes from Latin America, but it is also very often eaten in Asia and Africa. Thailand is the biggest exporter of cassava, and also produces tapioca.

Recently, I saw a funny news story from Thailand about cassava: Wild elephants stumbled upon a feast when they found a tapioca delivery truck with a flat tire!

The driver, Somkuan Sirisat, said he had gone for help to repair the tire Sunday night, and when …
1 comment
Read more

April 05, 2005
The theme for this year's World Expo in Aichi is "Nature's wisdom". Tomorrow, April 6, we celebrate Sweden day.

From the official website: "From unique landscapes to contemporary design, everyday lives to futuristic ships; the Nordic Pavilion invites you to explore the modern Nordic world in an oasis of calm and tranquility. Light, water and wood, all such important elements in Nordic life, will feature strongly in the pavilion."

Actually, I am disappointed that the Nordic/Swedish pavilion does not mention much about environmental protection. This should have been the main theme, including topics such as renewable energy, sustainable agriculture and recycling of resources.

It seems Denmark is better at taking advantage of the World Expo, as a unique opportunity to promote environmental protection and especially its wind turbine industry. In fact, Denmark holds an impressive 40% share of total worldwide production. Technical developments are rapid and turbin…
1 comment
Read more

High oil price and the impact on food production

April 04, 2005
BBC is reporting record high oil prices, quoting Goldman Sachs saying that the oil market may be in the early stages of a "super spike", which could push prices as high as $105 a barrel.

Twice as high as today? Four-five times as high as a few years ago? This has tremendous impact on our society, especially in countries like Japan, which is so dependent on oil imports for its economy.

Very little analysis, however, has been done to examine what will happen to food production, under such conditions. In fact, modern farming methods are terribly dependent on oil. Not only for the tractors and other machinery that each farmer use on a daily basis, but also for the massproduction of agricultural fertilizers and pesticides. The entire delivery system (to slaughter houses and factories, and finally to the supermarkets and back home to your kitchen) must also be re-examined.

What will happen when food prices for consumers go up dramatically, due to the higher oil price?

Countries in As…
2 comments
Read more

Why are genetically manipulated organisms in Asia?

April 01, 2005
According to a recent article, published by the Citizen's Biotechnology Information Center in Tokyo, genetically manipulated (GM) crops are increasingly grown in Asia.

China has grown a GM cotton variety since 1997. The cultivation of GM rice is about to be approved in China, GM trees are being planted, GM cows are being born, and there is now the possibility that GM potatoes will be cultivated.

The cultivation of GM cotton began in India in 2002 and reached 6% of the total planted area in 2004. In the Philippines, GM maize cultivation began in 2003. Still, in Japan, there are no GM crops at all, except for a few research projects at universities. Even though the Japanese government has approved certain GM crops, there is a very strong movement against GM foods in Japan. Also, Korea has no commercial GM crop cultivation.

It seems that the large multinational corporations, especially Monsanto, are targeting poor farmers in developing countries. This is highly regretable. GM crops are …
Post a Comment
Read more

April 01, 2005
North Korea has admitted that bird flu had been detected in several farms near the capital, Pyongyang. State media said hundreds of thousands of chickens had been destroyed to prevent the virus from spreading. WHO has sent diagnostic kits to help the North Koreans determine if the birds died from the deadly H5N1 strain. This strain of bird flu has killed almost 50 people since December 2003.

WHO is very concerned that it could lead to a influenza pandemic.

It is the first known case of the disease, which has wreaked havoc in Southeast Asia and China, to strike North Korea. Two or three chicken factories, including one in Hadang, were recently hit by bird flu, according to the North's Korean Central News Agency (KCNA). The Hadang factory is one of five constructed in December 2002 that breeds and processes chickens in Pyongyang.

For poor countries, a large outbreak can be a real catastrophy.