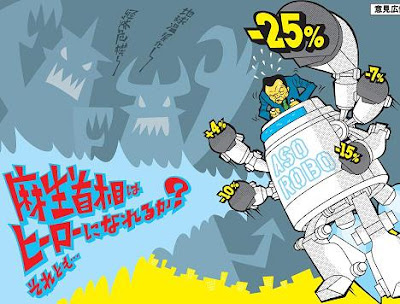 Image from Nikkei, the major financial daily here in Japan. This ad was sponsored by WWF Japan and Avaaz.org to highlight the options for Prime Minister Taro Aso. He is supposed to decide Japan's CO2 emission targets in June. They range from an increase of four percent (suggested by the industry) to reductions up to 25 percent.

Turns out 63% of the public, when asked, will support deep cuts. "Can Taro Aso be a hero," the ad asks. Wouldn't it be great if he really came forward on this issue? More over at Treehugger.

Japan's international reputation and economic future are at stake as Japanese Prime Minister Taro Aso prepares to announce Japan's 2020 climate targets in the next few weeks. His decision will be critical to progress at global climate negotiations -- currently taking place in Bonn, Germany -- as countries like the USA and China are deliberating about their own ambition levels.

Pandabonium said…
Rather than wait for PM Aso to become a hero, I think a better course would be to replace him with someone who already embraces strong targets.
5:42 pm, June 07, 2009