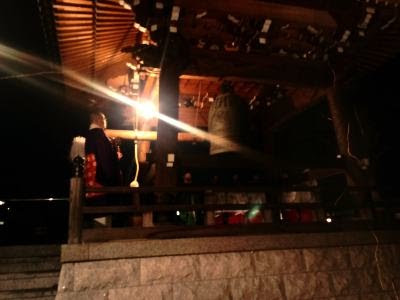 I like to go to a local temple near where I live on New Year's Eve. It is cold but there is amazake, a sweet brew that is heated, and boiling hot toshi-koshi-soba. The priests do a ceremony, reading sutras to the strong beat of a drum, and several small bells are rung. Some of us do zazen in the Main Hall.

But the big event as far as I am concerned is the opportunity to line up and ring the huge temple bell.

In Japan it is done using a rope to swing a heavy wooden log, that hangs from the ceiling of the bell tower. The kids and everyone get to try once. Some make a huge effort, and the bell responds depending on speed and force, as if it has a life of its own. Not always the huge, deep reverberating sound the temple-visitors expect. Others do it right, saying a quiet prayer before and after. The bronze bell can be heard in the entire town.

There is insense and log fires in metal barrels, tended over by old guys in long coats while we all strech our hands forward for some heat in the midnight. In the distance there is the sound of flute and drums from a nearby shinto shrine... Wishing all my readers here at Kurashi a Happy New Year!!

Update: The utter lack of posts are due to a massive editing job that requires all my attention in January. More details about it later, I hope!
prayer Shinto Zen

I'm too lazy to stay up until midnight these days, but our Butsudan was adorned with fresh flowers and the sweet smell of incense from Koyasan.

We visited Kashima Jingu (shrine) today as well and joined the throng of others who were both celebrating and praying for a better world in the new year.