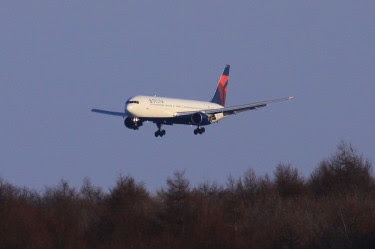 Global Voices writer Takashi Ota has pieced together an account of a Delta Jumbo Jet trying to land in Japan on March 11, 2011. Clearly this was a difficult call. Around 3PM, just after the large earthquake, there was massive turbulence and problems at a number of airports at Narita, Ibaragi, Fukushima, Sendai, which would affect air traffic everywhere else in the Japanese airspace.

On March 11, 2011, a Delta airplane pilot approaching Narita airport described his experience of an emergency landing. It was a vivid description that his record rapidly spread across the blogosphere. This particular jet was able to land at Chitose in Hokkaido:

Suddenly ATC comes up and gives us a vector to a fix well short of Chitose and tells us to standby for holding instructions. Nightmare realized. Situation rapidly deteriorating. After initially holding near Tokyo, starting a divert to Nagoya, reversing course back to Tokyo then to re-diverting north toward Misawa, all that happy fuel reserve that I had was vaporizing fast. My subsequent conversation, paraphrased of course…., went something like this:

Glad I was not on that jet, everyone who was has my full sympathies.

Glad the pilot and the tower could bring everyone back home, safely.

blukats said…
I swear I read somewhere that this was a hoax post.

Interesting how easy it is get something accepted as true on the internet with no real verification. Not saying you did that. It already was passed around the internet for a long time.
1:29 am, August 13, 2011

blukats said…
I wanted to expand on what I experienced since I was one who landed in Japan after the quake. We were about two hours north from landing. While it took a little time for the pilot to get clearance to land at Haneda, it was his first choice and there was no problem having planes land there. Which means it was open till about 6 pm and took many flights before ours. Delta regularly lands there.

I have read that some flights that landed elsewhere were stuck on the tarmac for some time but still have not heard of any that were out there for nine hours. Given the situations inside Haneda, I would have rather stayed in the plane. Irregardless, we were one of the last planes to arrive and they got us off the plane rather quickly and there were no passengers having to wait on the tarmac.

I have yet to see any one from Delta confirm this story. It seems strange given that Delta operates out of both Haneda and Narita that they did not divert to Haneda where they would have been allowed to land since several planes did after the quake. Plus several pilots have stated that the report is fake.

blukats said…
Sorry, don't want to overwhelm your comments, but no Delta flights are documented to have landed where this story claims to have landed.

Pandabonium said…
Good post. No reason to believe it a hoax, nor was it a dangerous situation.

This is why aircraft (all of them, from commercial airliners down to single engine powered gliders) are required to have fuel reserves. Yes, if things get busy or weather (or massive earquake/tsunami) interrupts traffic flow, a plane may need to dip into those reserves, but that's what they are there for. And yes, a pilot may have to declare a fuel emergency to get his plane out of the holding pattern and cleared to land. It's the only way for controllers to know the situation on a particular airplane.