"Japan Is So Rich"

November 09, 2013
Do watch the TED talk video, I have to share this post from Ten Thousand Things:

Great talk and breathtaking photos by author and historic preservationist Alex Kerr at TEDx in Kyoto on his mission to save Japanese country houses.


Japan is so rich: the natural environment, the fantastic traditional culture, the wealth of beauty and materials and spirit of lifestyle that you find in these old places. It's there and it can be saved.

Kerr uses double-paned windows for energy conservation. If his country houses were updated for solar, renewable energy, that would be even more modernizing, given 3/11's call to shift, downsize energy usage.

The reason small towns in Japan (and elsewhere) are experiencing depopulation is because they were built around local (agricultural, fishing) economies that have been collapsing under the global food industry's drive towards ever-increasing expansion...Japan's food sufficiency is now at 39%; when Alex Kerr came to Japan as a child (1960's), the nation’s food self-sufficiency rate was around 80%.

Kerr's work to restore country houses is one facet of a larger grassroots-driven local revitalization movement that seeks to save traditional Japan's agriculturally-rooted, rural cultures.

Tragically, Tohoku, much of which was stricken by the 3/11 disasters was the bastion of Japan's sustainable, slow life, organic and heirloom food movement.  Areas in Tohoku not affected by the catastrophes (Yamagata) continue pioneering these shifts.

Elsewhere, young Japanese people are leaving urban areas to return to their rural roots to farm and open organic retreats.  Japanese singer Yae and her mother Tokiko Kato (also a renowned singer) have a farming community in Kamogawa (near Tokyo) that opened during the 1970's.  It's a model of downsizing energy use, revitalizing traditional self-sufficiency, and cultivating simplicity.

More about the country house that captured Kerr's imagination and heart as a teenager: "Bringing an 18th-Century Farmhouse Back to Life" (Liza Foreman, NYT, Dec. 27, 2012) 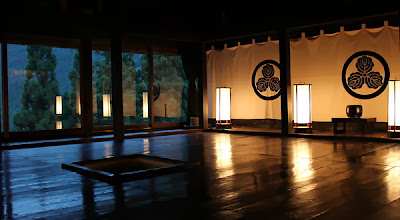 Take a look at The Rational Pessimist, he has some rather compelling arguments, Finding a Narrative for Climate Change:

OK, true, we don’t have much time, but we do have a powerful narrative that has firm, logical, scientific foundations. And we shouldn’t be afraid to push it.

We don't have much time. Not in Japan, not in the UK, Sweden, wherever you are. Certainly not elsewhere.


And so on and so forth.

For more, check out Papersky Magazine.

And here is more about Alex Kerr and his Shikoku getaway:

For those in search of the past, here is a mountain retreat from the pages of history. Step back in time and catch a glimpse of a life once lived all over Japan and while you’re there, lend a hand to construct it again. In “Lost Japan,” I wrote of discovering a thatched roof farmhouse in Iya valley, which I bought in 1973 and named Chiiori (Cottage of the Flute).  Over the years I rethatched the house and began to learn more about the village surrounding it. I discovered that the area preserved a way of life that not only predates “modernism” but much of what we associate with traditional Japan itself. Chiiori and Iya are set amidst a world of mossy rocks, waterfalls and thatched houses that seem to grow like mushrooms on the slopes – a place close to ancient Shinto’s “age of the gods.” Over time, however, Iya has suffered as the main work of its people shifted from agriculture to construction.  Across the nation the government props up rural economies by subsidizing massive civil engineering projects – damns, river embankments, and roads – and Iya, being poorer and rockier than most, shows signs of abundant cement pouring at every turn.

In 1997, friends joined me in founding The Chiiori Project which attracts volunteers from Japan and abroad with the goal of restoring the house and helping the depopulated village around it come back to life. Visitors also come for workshops and seminars, using Chiiori as an isolated venue for both traditional and modern ideas. But in the evening, it’s always off to the outdoor baths at the local onsen. Back at Chiiori, we sip sake, watch the smoke billow up into the rafters and talk into the late wee hours.

In the summer of 2007, I began to devote much more of my time to Iya. We changed the name of the non-profit to Chiiori Trust to emphasize a focus on membership and fund-raising and we’ve done a lot of work to improve the house and surrounding fields. There are two young staff living permanently at the house, Toru Muramatsu (handling Japanese language affairs), and Paul Cato (English-language manager). Since 2007 we’ve become very active with the township, managing community activities that aim to revitalize Iya.

Tom O said…
Martin, as I am sure you are aware, you do indeed have a personally signed copy by Mr Kerr of 'Lost Japan'. When I in Shikoku three years I paid a visit to Chiiori and who should be sitting outside, I got there just in time... Had a nice chat with the chap who was very affable. Goodoh taimingu desu gozaiitashimashita!!
9:24 pm, November 12, 2013

Anonymous said…
Hey Kurashi, thanks for linking us to Kerr on TedX in Kyoto. I hadn't seen it yet.

Even if investors and businesses don't take to the idea of restoring country houses in the near future, I think it will eventually have to happen anyway, and maybe not exactly in the same way Kerr envisions it happening.

I think it'll be less about attracting potential tourism and saving traditional anything, and more about corporations buying up whole towns on the cheap and installing cookie-cutter communities that are largely surrounded by arable lands. Whether or not this model works, I don't know. Old fishing villages are probably kaput.

That's why I found land at 860 meters next to the Alps.