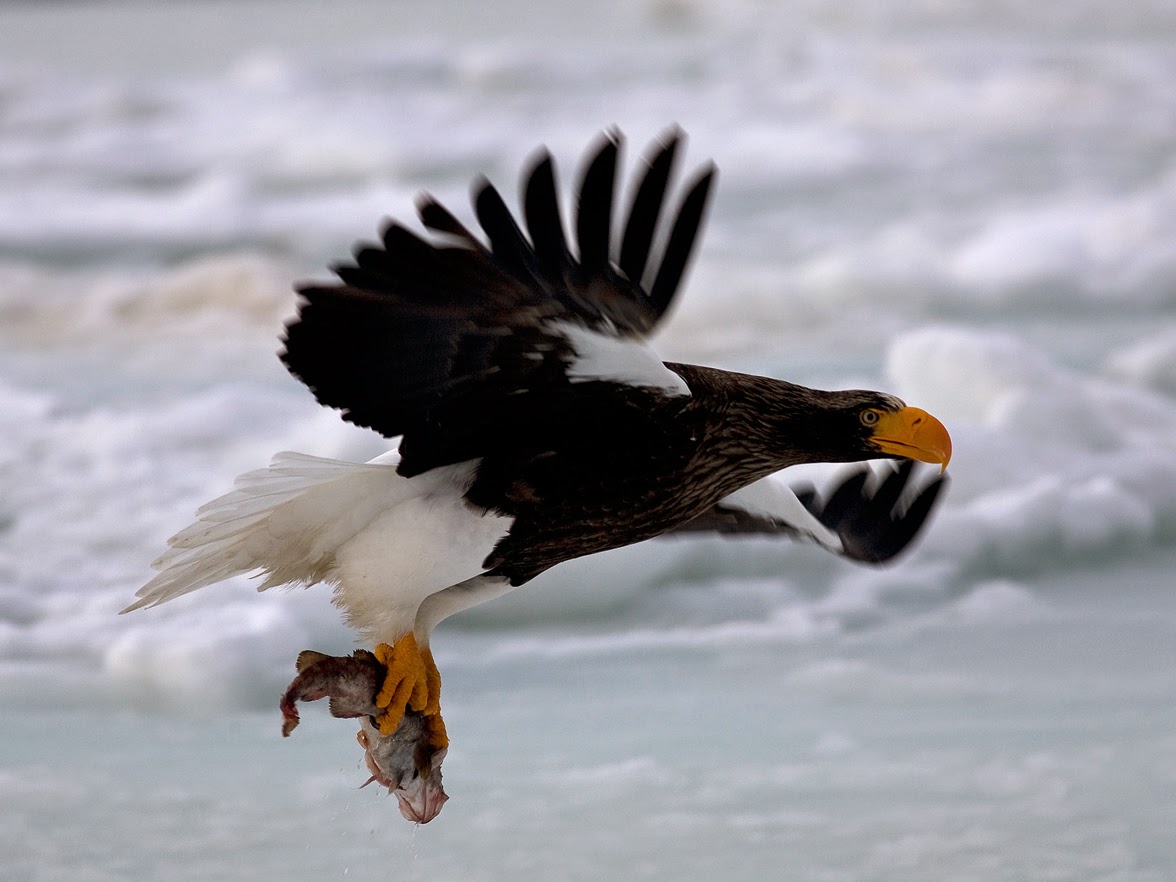 Good news, possibly some important wetlands may get protection, if they make it as Ramsar Convention sites. One in particular, in Ibaraki Prefecure, could help protect the habitat of the Oowashi, Steller's eagle, in Swedish, Jättehavsörn.

Lake Hinuma: I have been there a number of times, thanks to Pandabonium, who insists on sailing his Lido in that area, and it is a lovely place.

Hope these great eagles will get all the protection they may get, that lake is such a sweet spot.

About the Oowashi eagle, this is a huge bird of prey:

This bird nests in two habitats: along sea coasts and alongside large rivers with mature trees. They nest on large, rocky outcroppings or at the tops of large trees. On Hokkaido, eagles concentrate in coastal areas and on lakes near the coast, along with substantial numbers of white-tailed eagles. Eagles depart between late March and late April, adults typically leaving before immatures. Migrants tend to follow sea coasts and are usually observed flying singly. In groups, migrants are typically observed flying 100–200 m (330–660 ft) apart. On Kamchatka, most migrants are birds in transitional plumages. They are also occasionally seen flying over the Northern ocean or perching on sea ice during the winter. They are legally protected, being classified as a National Treasure in Japan and mostly occurring in protected areas in Russia. However, many threats to their survival persist. These mainly include habitat alteration, industrial pollution and over-fishing, which in turn decreases their prey source. The current population is estimated at 5,000, and declining.

Japan has pitched four wetland areas, including one in Ibaraki Prefecture that is home to a rare species of eagle, for recognition under the Ramsar Convention.
The Environment Ministry recommended to its Central Environment Council’s wild animal subcommittee on April 22 that the areas be included as candidates for the Ramsar Convention, a global treaty for the conservation of important wetlands around the world.
The four wetland areas in Japan are expected to be officially included as recognized sites at the meeting for the contracting parties to be held in June in Uruguay.
The wetlands chosen as Ramsar sites are: the Hinuma area in Ibaraki Prefecture that is home to the rare Steller’s sea eagle; the Yoshigadaira group of wetlands in Gunma Prefecture that has a natural environment formed by volcanic activity; and the Higashiyoka mudflat and Hizen-Kashima mudflat, both in Saga Prefecture.
The ministry also decided to substantially expand the recognized area of waters of Okinawa Prefecture's Kerama Islands, which are already included in the treaty.

Here in Japan, Ramsar areas are regarded as important and cannot easily be challenged. Quoting international conventions, we can make a difference. Locally, development issues can be brought to the attention, and global rules can be applied. Your small lake or river may be an important part of a much larger waterway, connected to all kinds of efforts to save biodiversity. Don't let that local planning authority pave over your precious ditch, if you think it is connected to something more important...

Thus, as the new Shinkansen train route made headlines recently, they may have to be re-routed:

Shinkansen extension beyond Kanazawa may be changed to ease impact on protected wetland
Kyodo Mar 16, 2015
FUKUI – The Hokuriku Shinkansen Line’s planned route beyond Kanazawa, Ishikawa Prefecture, will probably be changed to avoid harming an important wetland area in Fukui Prefecture, the government-backed builder of the bullet train system said.