January 27, 2010
Members of grassroots peace groups and other concerned individuals have gathered to form the “US for OKINAWA peace action network".

Closely affiliated with the Peace Boat NGO and also including members from the Peace Not War Japan collective, the network’s primary aim is to voice the opposition of foreigners living in Japan to the presence and plans for expansion of U.S. military bases in Okinawa (and beyond):

US for OKINAWA is a new peace action network based in Tokyo that was recently formed by U.S., Japanese, Canadian, New Zealand, Australian, Welsh, Mexican and other citizens living in Japan who are concerned about Okinawa. A deliberate double entendre, US may be read both as "us" (you, me, everyone), as well as U.S. (reflecting the proactive stance of Americans in Japan who support a base-free Okinawa).

US for OKINAWA was organized out of shared concern regarding the danger that the U.S. Futenma Air Base poses to the people of Okinawa, as well as the pressure exerted by the U.S. on the new Japanese administration to construct a replacement facility for the base in Henoko, an environmentally fragile area on the eastern part of the island. If carried out, this construction would likely spell the extinction of the endangered dugong (cousin to the Florida manatee) and simply shift the problems of contamination, air pollution, safety hazards and crime associated with Futenma to another part of Okinawa.

Information on the network's latest initiatives will also be posted on its blog here.

The network is planning a series of actions to raise support and awareness for its cause. This coming weekend, its very first events will be held in Tokyo (Sunday, January 31st) and Kyoto (Saturday, January 30th). Information is as follows: 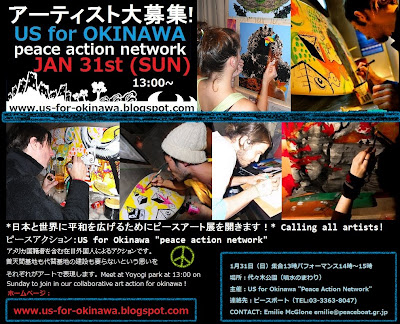 Come out to participate in a creative, art-themed event to raise awareness and gather support for a base-free Okinawa. Together, we will create collaborative art projects (painting, digital art, collage, photos, recycled artwork and more) featuring our message. Everyone is welcome…Please wear blue or green clothing to show your support for a peaceful Okinawa. No Futenma, No Henoko!!

Directions from JR Harajuku Station (JR Yamanote Line):
From Harajuku Station, go right out of the Omotesando Exit. Turn right and walk over the bridge to the right. Cross the street and turn left. The park will be on the right. It’s about a 5 minute walk. Access is also available from the Tokyo Metro Chiyoda Line (Meiji-Jingumae station) or the Tokyo Metro Fukutoshin Line. 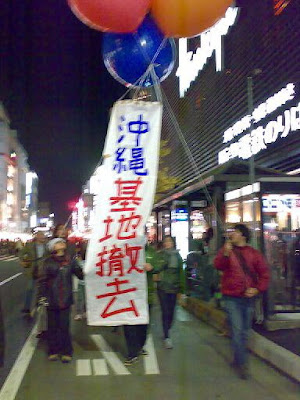 Kyoto Action is a group of people living in Kyoto campaigning to close down Futenma Air Force Base and stop the construction of a new U.S. military base at Heneko in Okinawa. The group meets every Saturday, same place, same time, to show their opposition to U.S. military base constructions in Okinawa. On January 30th, in solidarity, Kyoto Action will also be distributing information about the US for Okinawa "Peace Action Network."

Further information also available here in Japanese and in English.