Living in Japan, living on the edge. 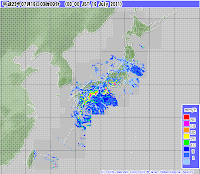 After a week of hot weather, in the range of 34-35 C, we are now suddenly faced with a large typhoon. It just started raining heavily here a few minutes ago, with thunderstorms, and the next few days promises to be tough. At least, the heat is not a problem!

We knew this typhoon was approaching, as the Meteorological Agency has fancy maps and forecasts. Yet, the force of it is always a surprise. This is what people here endured for hundreds of years, why should we be surprised now?

Living in Japan, living on the edge.

A large and powerful typhoon was moving toward the main archipelago Monday, with the Meteorological Agency warning of downpours, strong winds and high waves in southwestern and western Japan through Tuesday.

Typhoon Ma-on was located about 300 km northeast off Okinawa's Minamidaito Island at noon Monday, traveling northward at about 25 kph, the agency said. The season's sixth typhoon could cause heavy rain Monday in areas ranging from Kyushu to the Pacific coast of central Japan and is expected to approach western to eastern Japan on Tuesday and Wednesday. The weather agency issued high wave warnings for most of the southern coast from Kyushu to southeast of Tokyo. Due to the typhoon, airlines on Monday cancelled lots of flights.

Don't take anything for granted. 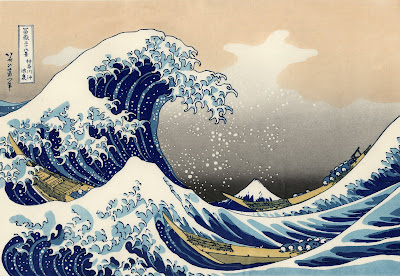 Tom O said…
It was Oscar Wilde who made mention of those people who know 'the cost of everything and the value of nothing.' We've all known people with this view, and probably still know from afar, the same friends and 'shitteru-hitos'. Gold, over centuries, has always held its perceived financial value. Unlike salt, say. So, in Europe we have 'Greece'. And Ireland, Spain and Portugal. Bust and boom, usually in that order. So, Greece - this from Wikipedia:

"In early 2010, it was revealed that successive Greek governments had been found to have consistently and deliberately misreported the country's official economic statistics to keep within the monetary union guidelines.[55][56] This had enabled Greek governments to spend beyond their means, while hiding the actual deficit from the EU overseers.[57] In May 2010, the Greek government deficit was again revised and estimated to be 13.6%[58] which was one of the highest in the world relative to GDP[59] and public debt was forecast, according to some estimates, to hit 120% of GDP during 2010,[60] one of the highest rates in the world."

Greece, a country I have been to several times and love it there, has a population of 11 million and and an army of, um, 400,000. I ascertained these details from a radio interview with the chap below. A Tory and someone I have absolutely no time for but when the truth is the truth.. Germany and France must be WELL pissed off, here in the UK and - due to the likes OF Mr Redwoord - not being in the Eurozone, with the onus they have on them. Paying for other people's mistakes - why should one??