I believe in education... I remember learning about the Barsebäck nuclear reactors near my home town Malmö back when I was 10 years old, and when I tried to help collect signatures, one posh lady said, "Horrible, the anti-nuke people are using children to promote their opinion" and I remember distinctly how angry I got, "no, I'm not just a child, I am not being used...." It was my future that lady was dismissing. 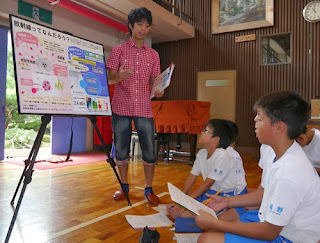 University student Daiki Kandatsu explains the difference between radiation and radioactivity to sixth-year elementary school students with the help of a poster, in Fukushima. (Mainichi)

Students studying infographics at Tokyo City University are applying their skills to teach elementary school pupils about radiation, and are hoping teachers will be able to use the materials to explain the topic in simple terms, even if they lack specialist knowledge.
During a lesson to pupils from Yuno Elementary School in Fukushima on Sept. 3, Daiki Kandatsu, a 20-year-old student in his third year at the university, spoke to the children in front of a poster containing an illustration of a light bulb.
"What if we compare radioactive materials to a light bulb? The light that comes from the bulb is radiation, and the ability to emit light is radioactivity. That's why it's correct for us to say, 'Radiation is emitted,' but not, 'Radioactivity is emitted.'"
To the children, light bulbs and nuclear radiation don't have much in common. But that was a point making the illustration in Kandatsu's talk titled "What is radiation?" easy to understand.
Kandatsu, who studies infographics at university, was not an expert on radiation himself, and he says he created the poster while learning about the issue "from square one." He also wanted to include information on the history of radiation's use, but he paid attention to how much the young children could take in, and decided to limit his talk to two points: the nature of radioactive materials, and how much radiation we are exposed to in our daily lives.
The light-bulb explanation went down well and Kandatsu heard the students saying, "I think I've got it!"
Education about radiation in Fukushima Prefecture is handled by teachers who received training from the prefectural and municipal education boards, with support from researchers who visit the prefecture from around the nation.
Yukiko Okada, an associate professor in the Atomic Energy Research Laboratory at Tokyo City University, has given over 30 lessons at elementary and junior high schools in Fukushima Prefecture since the 2012 academic year. Through those lessons, she felt the need for teaching materials that could explain radiation in simple terms.
It was around this time that she thought about putting up simple illustrations in school corridors and stairwells to explain radiation. She thought that giving children the chance to look over the information outside classes would deepen their understanding, and she asked Seita Koike, an associate professor specializing in information design at Tokyo City University, to help out.
Koike's research office had been involved in designing Yokohama bus maps, among various projects. Keeping visually impaired users in mind, he made the colors for different bus routes stand out, and increased the space between routes to make the maps more readable.
He stresses that in the latest designs for educational material on radiation, focus was placed on the perspective of users, rather than merely pasting information provided by the government and power companies.
The poster comparing radioactive material to light bulbs is on display in the gym of Yuno Elementary School, along with posters featuring other familiar items, such as curry and rice, and airplanes. The curry and rice poster was designed by a 21-year-old third-year student at the university. Using illustrations of vegetables and meat, it explains that those food products contain radiation in varying levels, saying, "Both food products and our bodies emit radiation." Children said the content was more interesting than what they learned during ordinary lessons.
"One problem with education from experts is the jargon, which is hard for kids to understand -- all those words flying about causes them to drift away from science. But with infographics, there are no such worries," Okada says.
The efforts of Tokyo City University students are due to be unveiled at an Atomic Energy Society meeting at the university next spring.
In 2008, curriculum guidelines for junior high school science education were revised to include lessons about the nature and use of radiation, and education on radiation began in the 2012 academic year. In November 2011, after the outbreak of the disaster at Tokyo Electric Power Co.'s Fukushima No. 1 Nuclear Power Plant, the Ministry of Education, Culture, Sports, Science and Technology prepared three types of supplementary teaching materials for use in elementary, junior high and high schools. These materials are used throughout Japan.
At the same time, students in Fukushima Prefecture, where the nuclear disaster broke out, have to continually think about exposure to low-level radiation. To make sure students have correct knowledge about radiation and are equipped to make their own decisions, the prefecture is proceeding with its own education on radiation. The prefectural education board produces material for teachers to use, and study meetings are held for school teachers to boost their knowledge about radiation. This forms the basis for about two to three hours of teaching each year as part of class activities.
In December 2012, the Fukushima Municipal Board of Education compiled its own teaching materials, tailored to each school grade, on the grounds that there was a need to provide education corresponding to the situation in the city, where airborne radiation levels were higher than in other municipalities. Second-grade students learn about high radiation levels in ditches and pools of water, while fifth-year elementary school students learn about radioactive materials in food. Second-year junior high school children learn about the effects of radiation on the body.
During training sessions, the Fukushima Municipal Board of Education holds mock lessons to support teachers, but some educators who lack experience worry about teaching children about radiation.
"Sometimes I pretend to know the things I've often read in newspapers or seen on TV," confesses one female elementary school teacher. "I don't know how much is getting through."
October 27, 2013
education Fukushima

Pandabonium said…
I hope they teach the truth. As you know I am against nuclear power, but I am also against irrational fear mongering which has an equally damaging effect on people. In this case, more people are likely to die early as a result of the stress imposed by the latter than by the effects of the former.

We should all do what we can to care for others with compassion which, to my mind, requires being as objective as possible about the real situation rather than using fear to push our own agendas. For example, eating animal products will most likely cause more DNA damage, cancer, etc. that this release of radiation has done. Yet, people fearful of the radiation continue to feed their kids meats.

If we truly care about life on earth, we will end nuclear power and stop eating any animal products.

Tom O said…
I know someone that if he had been taught this stuff when he was 10-sai gurai it would have meant countless fear-based (see above..) nightmares. It was bad enough when he was 13-14 and was then aware of the 'Four minute warning' (ie if the relevant siren warning sounded you had just 4 minutes to find somwhere safe - bit of a misnomer there - before those missiles from the USSR hit. Oh, and of course the knowledge that there were literally hundreds of these charming things pointing in both direction. The UK, as usual, expendable in terms of US 'National Security'. Around that time I would also have watched the legendary 'World at War' documentary series, narrated by Laurence Olivier. The ones on Hiroshima/Nagasaki plus the discovery of Belsen being 'highlights. As a 15 year old this, um, 'friend' did a project on the Berlin Wall and featured all the methods of prevention of escape, ie machine guns firing large ballbearings and piano wire trips. He got called in for a chat about this special 'interest'....
9:41 pm, November 01, 2013

Tom O said…
Gomen, the coda/moral of the story re all this is please just LET CHILDREN BE CHILDREN WHILE THEY ARE. Not much to ask. Why destroy any innocene that they entitled too at that point?
9:43 pm, November 01, 2013

Martin J Frid said…
Thanks for the brilliant comments (and the additional info over at Ten Thousand Things).

Pandabonium said…
Indeed Tom. I was 12 during the Cuban missile crisis. The US there were ready made bomb shelter on display in a strip mall's parking lot. And of course all through elementary school we'd have "drop drills" where we'd all get under our desks and cover our heads (as if it would protect us in a nuclear attack). A couple of years later, Barry Goldwater would run for president suggesting that the US use nuclear weapons in Vietnam - a position supported by some of Joint Chiefs of Staff.

I just wanted to go out and play.

About this and so many other things "we" have done/are doing on and to this earth and its lifeforms...

We "have a lot of 'splaining to do" as Desi Arnaz used to say to Lucy.

Tom O said…
Me thinks it would be far more valuable for children everywhere to be taught not to trust politicians, company executives (and their agendas, hidden or public), journalists, bearers of false gifts, shareholders... Hey, is some adult 'grown up' cynicism coming thru here??