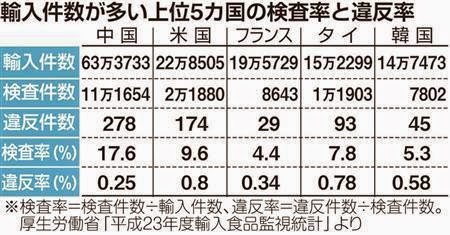 So, how bad are food imports? Sankei Shimbun notes that in 2013, Japanese food inspectors officially caught some 278 violations in the imports from China, compared to 174 from the US, 93 from Thailand, 45 from Korea and 29 from France.

But if you look more closely at the data, Japan inspected a lot more food from China.

Thus the rate of violation found by Japanese government food safety inspectors was only .25% in the case of Chinese imports. The bigger problem would be foods imported from the US at .8%, Thailand at .78%, Korea at .58% and France at .34%.

China, the bastion of food safety?

Well, they rank just above France, representing the European Union, with its draconian food safety laws, that the US is trying to crush in the Transatlantic Trade and Investment Partnership (TTIP) negotiations, that seem similar to what the US is trying to do in the TPP negotiations here in the Pacific... Here is what BEUC, the European consumers organization has to say:

What is at stake for EU consumers? Food is one of the vital sectors which will be majorly affected by a TTIP (Transatlantic Trade and Investment Partnership) agreement between the EU and the US.

A new BEUC position paper on Food and the Transatlantic Trade and Investment Partnership (TTIP) is available as of today, wherein we have identified three main areas of concern.

1. Decontamination treatments
The US authorises slaughterhouses to use decontamination treatments on carcasses, on a massive scale. Chemicals like chlorine and peroxyacids are used to wash meat at the end of the production line. Such treatments are not allowed in the EU due to insufficient evidence as to their efficacy and the potential risk to consumers’ safety. TTIP should not be used as a vehicle to allow these treatments within the EU.

In the EU, food safety is guaranteed by the ‘farm to fork’ approach, meaning that food safety must be ensured throughout the production chain. This approach minimises the risk of human contamination with poisonous bacteria carried by farmed animals, either via consumption or transmission from the production environment. As such, it has greater public health benefits than ‘end-of-line’ pathogen reduction treatments focussed only on the food pathway. BEUC is aiming to prevent any potential negative impacts TTIP could have on consumers’ wellbeing.

Aside from the aforementioned concerns, TTIP does present some opportunities for both blocs to step up cooperation in the food sector. Although currently not part of the negotiating trade agenda of the EU or US, we see positive potential for consumers for example in:

- Food traceability
Recent scandals involving supposed beef products tainted with horsemeat in the EU as well as poultry and tomatoes in the US show a need for both partners to advance their practices. TTIP is an opportunity to put more effective food traceability systems in place.

- Food alert systems
Under TTIP, trade barriers will open so a broader range of foodstuffs will circulate in a wider market. Therefore, sharing food safety information effectively and quickly in emergencies is also an area where we see potential for cooperation between the EU and US.

The US is the world's dirtiest food exporter.

Not saying Chinese foods are safe, or not, just noting that if an importing country like Japan makes THE effort, imports can be managed through a) investments in food safety measures and education at the production plants, b) global standards like FAO/WHO Codex Alimentarius, c) investments in food safety monitoring and inspection at points of import, like Japan does.

Meanwhile, I will stick to a meat-free diet.

Graph from Sankei, from MSN. Data from Japan's Ministry of Health (2013)