We Are All Greeks Now 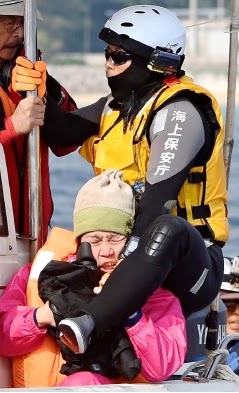 How will the EU deal with Greece? South vs. North narrative? Not really. More like people vs. banks. It is happening in Japan as well, esp. in Okinawa, Fukushima, Hokkaido. Rural vs. you name it - city? Hardly. Nagoya has its Toyota factories but is hardly enjoying the prosperity, in spite of the record-breaking 14+ million car sales. Detroit knows about that. London, well, it has tried immigration, will Tokyo follow? Again, hardly.

Speaking of Okinawa, Takeshi Onaga is the name to remember.

Ryukyu Shimpo: Okinawa Governor conveys his opposition to new US base

January 15, 2015 Ryukyu Shimpo
On January 14, after cabinet approved the fiscal 2015 promotional budget for Okinawa, Okinawa Governor Takeshi Onaga visited the Prime Minister’s Office and Cabinet Office. At his meeting with Deputy Chief Cabinet Secretary Kazuhiro Sugita, the governor conveyed his opposition to the government’s plan to move U.S. Marine Corps Air Station Futema in Ginowan to Henoko, Nago, and said he sought to relocate it to outside of Okinawa. However, his plan to meet with Prime Minister Shinzo Abe and Chief Cabinet Secreatary Yoshihide Suga, who is responsible for reducing Okinawa’s base burden, was not realized this time.
The governor reported from the meeting that he sought the government official’s understanding of the gubernatorial election outcome, and pledged to block new base construction in Henoko and move the Futenma base to other prefectures or abroad. He told him it was unreasonable for Okinawa to host 74 percent of Japan’s U.S. military exclusive-use facilities when the island is only 0.6 percent of Japan’s land area, now that 69 years have passed since the end of World War II.
The deputy chief cabinet secretary said he would exchange opinions with the governor on how to reduce the base burden.
At his meeting with Yohei Matsumoto, parliamentary vice-minister at the Cabinet Office, the governor showed his appreciation that a certain amount of the Okinawa promotion budget had been ensured.
The governor said, referring to the Okinawa promotion budget reduction, “A required amount was reserved. However, it went up last year.” He showed his willingness to meet with Prime Minister Abe and Chief Cabinet Secreatary Suga, saying it is important to convey what we think to each other.

Japan has always had the disadvantage of not really having any good models to follow. Historically, this country has had leaders that had few clever ideas of their own (while the people here generally did amazingly well in that department) and never really managed to stay ahead of the curve for very long. Most people outside of Japan probably cannot name a single Japanese prime minister, not even in recent history. I'd like to hope that we can all agree to elect leaders with a greater sense of responsibility.

Which seems to be the case in Greece, recently.

The Automatic Earth blog: The Greek Issue Just Got Personal

It was already present over the past two weeks, for example in Yanis Varoufakis’ meetings with Eurogroup head Jeroen Dijsselbloem and German FinMin Schäuble, awkwardly obvious in facial expressions and body language. A touch of personal discomfort. A touch of a threat that required chest-thumping and hubris to be brushed off. ‘You better do what we say or else’. Back then, perhaps it was still experienced from a political, deal-making, perspective. But in the course of yesterday it became clear something has changed.
It has become personal, you could feel it in the air, and that raises the danger level considerably. It’s not personal from the Greek side; Alexis Tsipras and Varoufakis merely act according to – their interpretation of – the mandate handed them by their voters. It’s the other side(s) that have started making it personal. They see themselves, their positions, as being under attack. And they blame Greece’s new Syriza government for that. Which may seem logical at first blush, but that doesn’t make it true. The people sitting on the other side from Varoufakis have dug themselves into these positions.
Which, as they rightfully fear, are now threatened. Not because Syriza means to do so, but because they come to the table with that mandate, to put an end to what has caused Greece to sink as deep as it has. There’s nothing personal about that, it’s democracy at work, it’s politics. Still, it’s perceived as personal, because it makes the ‘old’ leadership uncomfortable. They haven’t seen it coming, they were convinced, all the way, that they would prevail. They mostly still are, but in a now much more nervous fashion.

Japan also has this huge issue of debt, and nobody likes to talk about it. We are told that since it is mostly held within the country, we are not to worry. Southern Europe, however, thought the EU was "within" as well, but that is now being tested. How does the more economically favoured North respond when a crisis like this emerges in the South? Again, the challenge is a democratic one. Greece voted for a very reasonable bunch of people, this time. How about next election?

The hopes we all had back in 2009 or so when LDP got booted out, came to naught. Japan wasn't ready for a transition. Then the March 11, 2011 disaster struck, and - LDP got back into government. But we are all Greeks now. We are stuck with huge debt, and three nuclear reactors in core meltdown which will take billions of Yen to deal with, and a crisis in Okinawa over the US bases there, and "the old leadership uncomfortable."


February 10, 2015: Outside the gate of the US Marine Corp’s Camp Schwab at Henoko in northern Okinawa a sign announced that this was the 220th day of the sit-in there. Next to it stood an elderly man holding a flag bearing the words, DO NOT DISCRIMINATE AGAINST OKINAWANS. He told me he had not been given it by any organisation, but had had it made with his own money.  “This is it”, he said to me urgently.  “This is the issue!”


His flag symbolises the sea change which the Okinawan anti-base movement has undergone in the last fifteen years or so, a change in thinking that has led to a major political realignment, which in turn has affected the shape of the increasingly desperate political confrontation taking place there now.

And, as far as I am concerned, that goes for both Hatoyama, and Abe.

Unknown said…
Well, with Greece and other 'souuthern' EU countries it's the same issue. Germany, being its usual 'pragmatic' self, argues that if people had paid their due taxes (not lest the likes of shipping magnates like Onassis et al) then they would not be in this (chronic) mess. Spain seems to be off the radar here, the amount of their young population who are either unemployed or living abroad - man, thousands of them here in London - they love it even if NOT working and claiming. Sure, Greece elected a new party promising an end to austertiy but Germany still sees a big IOU figure. Oh, lest we forget 'democracy' also elected the National Socialists back in the early 1930s. Hmmm...

London - immigration, don't get me started.

Greece - Germany -WWII, just why Greece had to play this card when previous agreements blah blah already signed. I talked with a Greek chap a year or so ago - in London, where he living - and he said that it's just a plain simple fact. People in Greece are quite happy to not pay their taxes and yet complain when the rubbish doesn't get collected. AND when Germany comes calling for $$$$$.
11:12 pm, February 16, 2015

Unknown said…
Another pertinent, I think, angle about this is 'Northern europe v Southern europe. The latter being Greece, Italy and Spain.

Lately I'm leaning towards "time" and "long transition to something different". I know it sounds passive and defeatist, but the systems in place at present are so complex and rigorous that everyone's just kind of going through the motions, still digesting the old economy.

Given all that we collectively know about the system now; the mask being ripped off, where is the change that so many seek?

The too big to fail ideas (The Fed, BOJ, IMF, ) probably won't fail until new ideas outside of it are not only forged but implemented and practiced as well.

See How would an army attack a castle in medieval Japan?, via reddit. Basically they didn’t storm the castle, and this goes back to how you can change the system in Japan. You don’t attack it with signboards and slogans, or even molotov cocktails, rather you build the alternative that the castle/system has to contend with, rendering the castle/system weak, irrelevant, and unnecessary.