March 22: Large Demonstration and Parade Against Abe in Tokyo 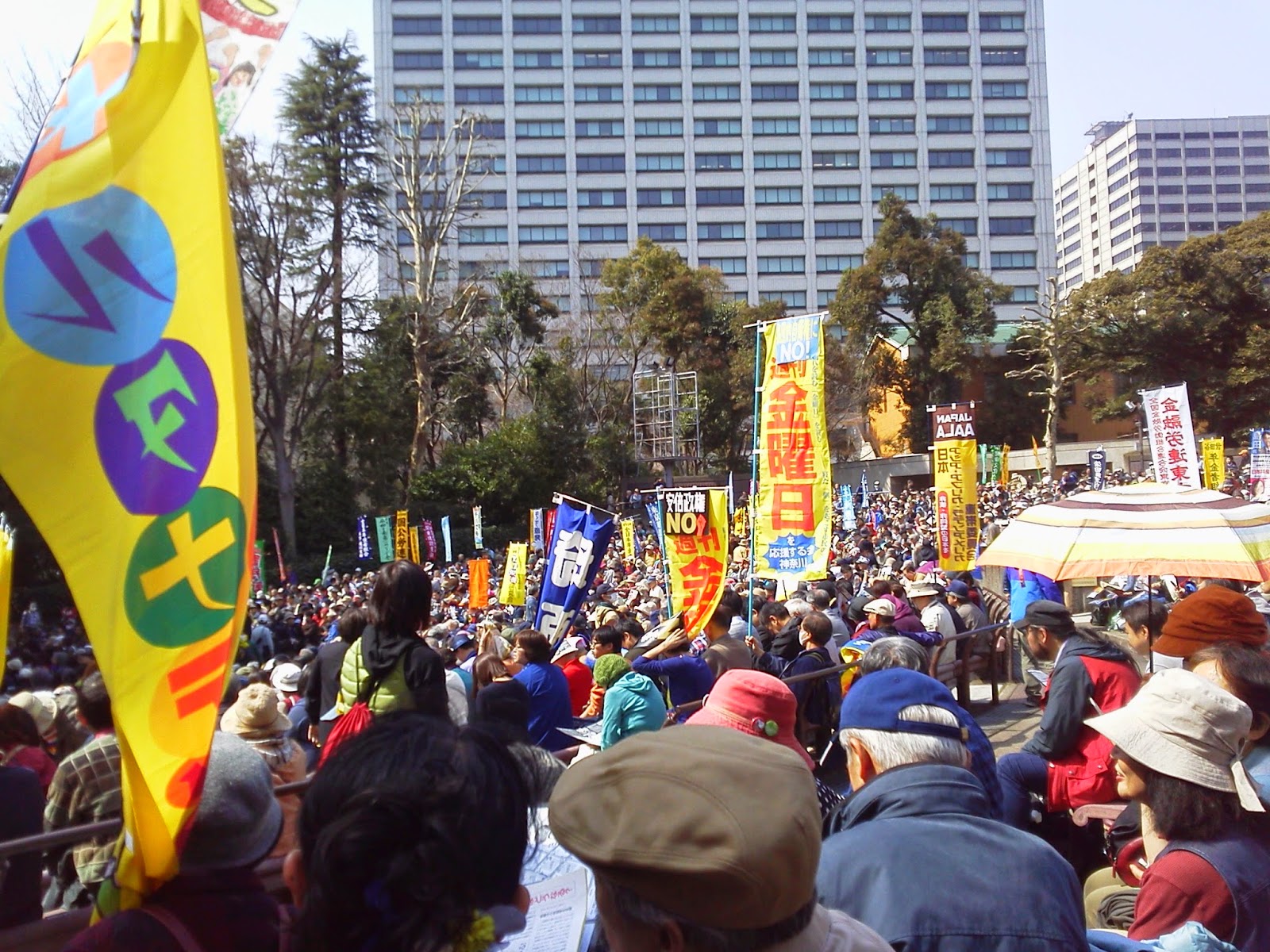 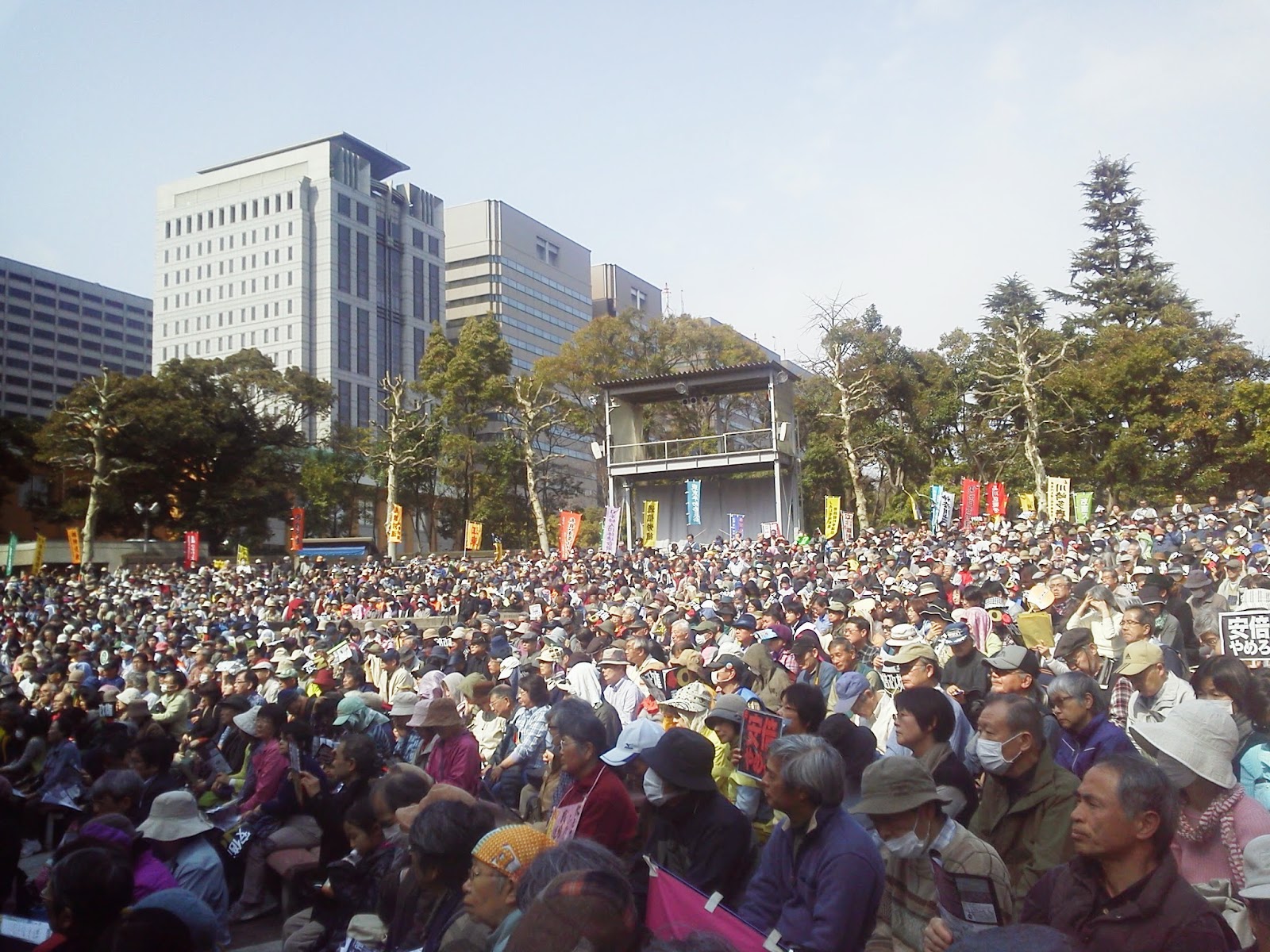 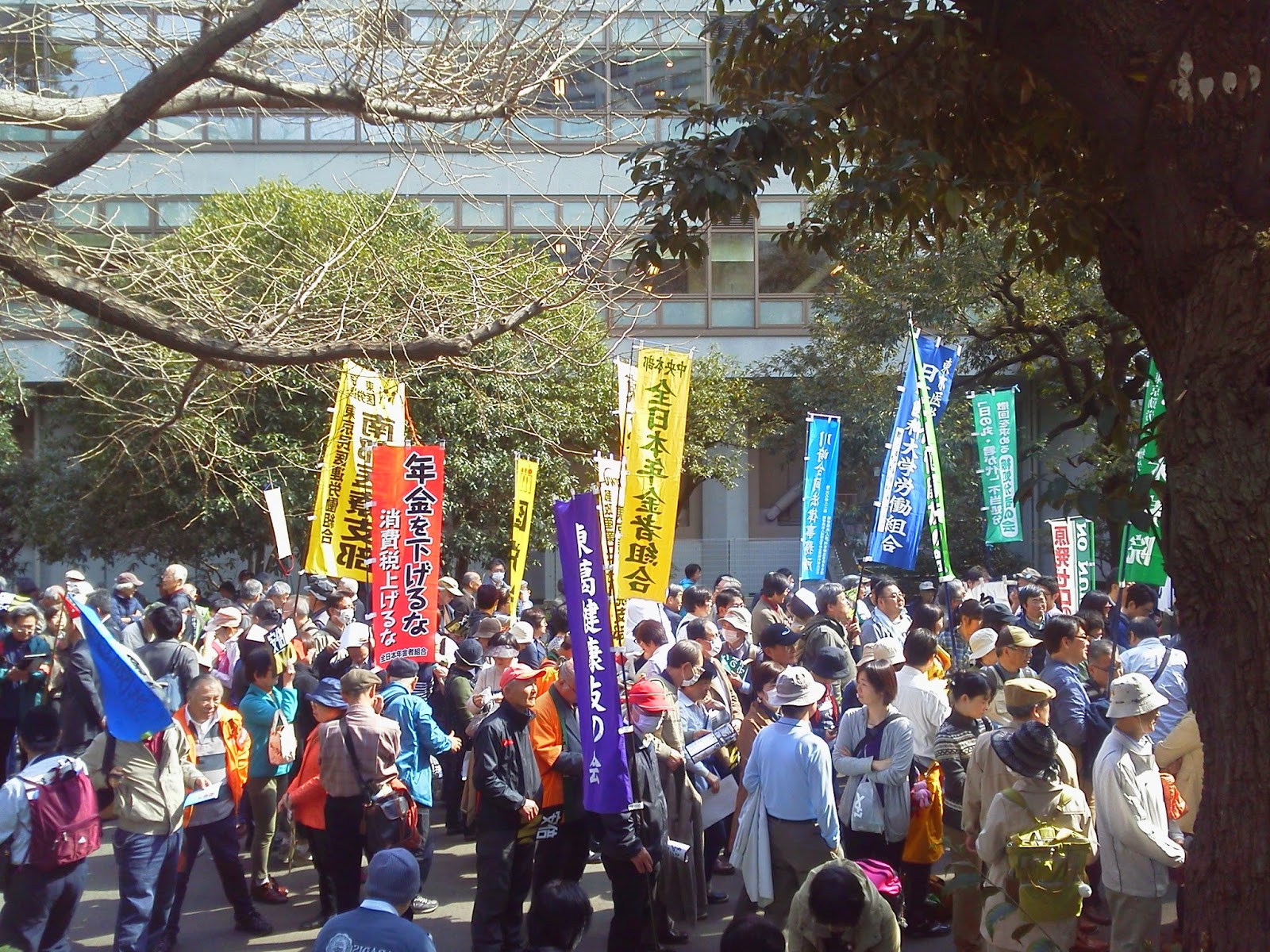 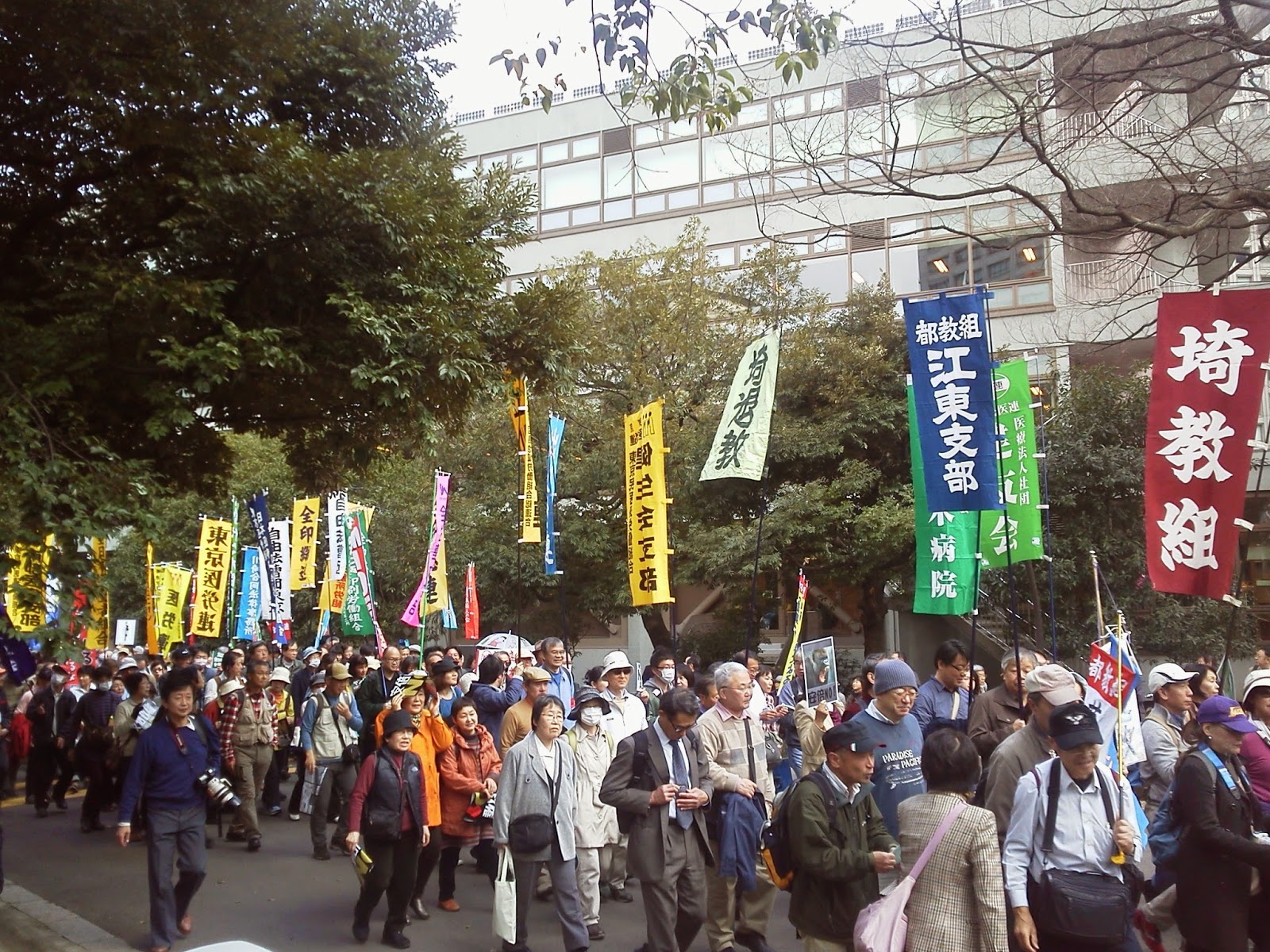 I went to the large demonstration today at Hibiya in central Tokyo and in the warm, sunny weather, some 10,000 people showed up for the parade to surround the Parliament Building (Diet) - Japan's Palace of Westminster or Capitol Hill...

The event was also billed as the "Democracy Convention 2015" in English.

If you have ever been to a large demonstration elsewhere, prepare yourself for the utter control here in Japan. Police and riot vans are everywhere, but as long as things go smoothly, like today, you can bring your baby stroller and your grandma... The organizers are committed to peaceful protests and so be it.

But, that may not be the way Japan's Public Security Intelligence Agency sees things, according to Eric Johnston in The Japan Times: Security blanket: Should Japan beef up its anti-terrorism measures? 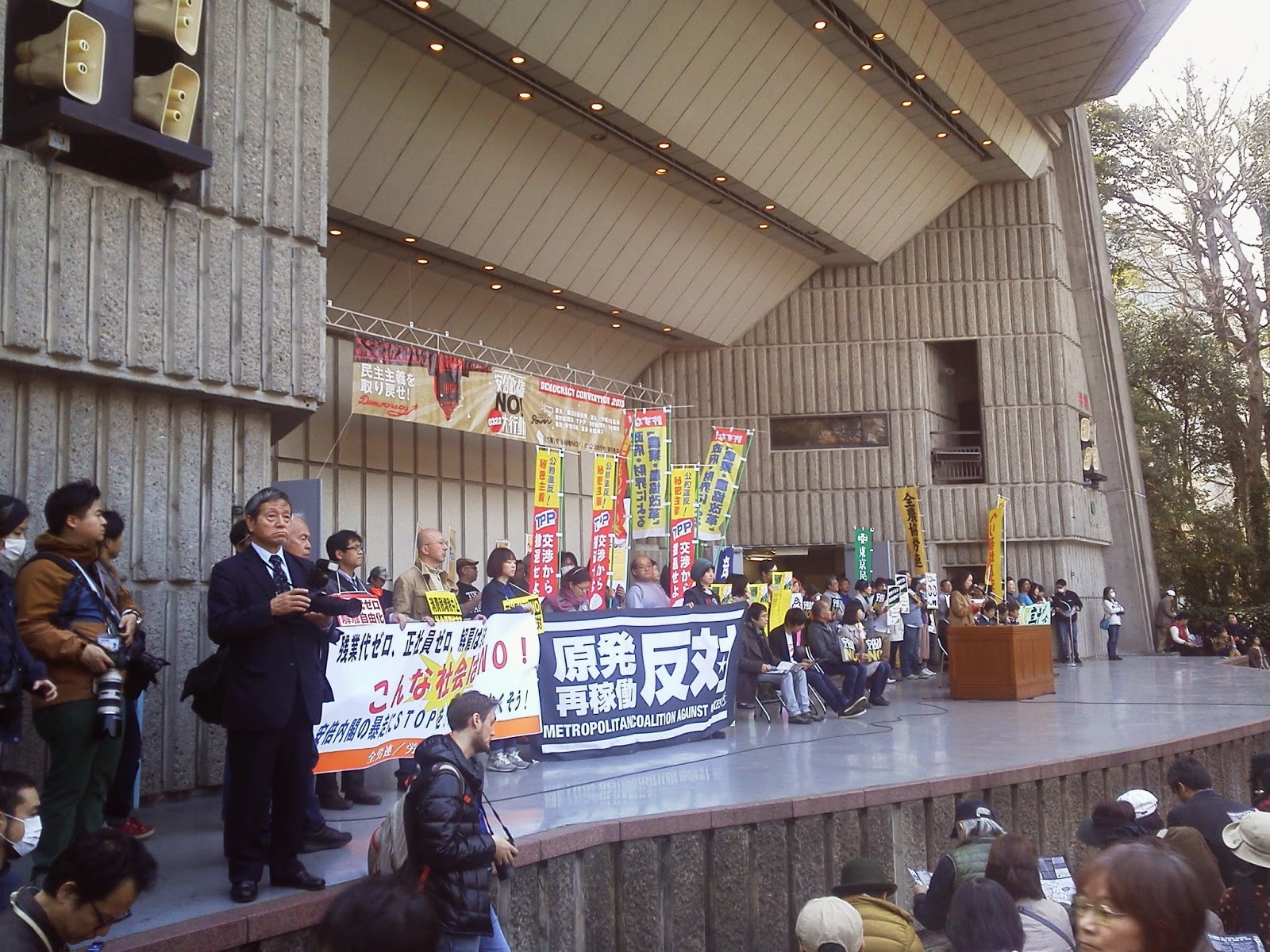 Great coalition of hundreds of groups for solidarity with Okinawa and labour rights, against TPP, hate speech and nuclear power plants - and much more. It was also a massive display of support for democracy and Article 9, the peace clause in Japan's constitution, that Prime Minister Abe is trying to change.

【Place】
Hibiya Open-air Concert Hall
Around the Diet
To submit a petition to the Parliament members at the same time as surrounding the Diet building.

【Organizer】
Committee for the 0322 Rally against the Abe administration.

【Statement】
Concerns are mounting that the second Abe administration has been
reestablishing the political characteristics of the pre-1945 Japanese
government. Most recently, Prime Minister Abe capitalized on the ISIS
hostage crisis to argue that Japan should be ready to send Self Defense
Forces abroad, while it is widely known that the administration’s
military and confrontational stance against ISIS has aggravated the
situation. The combination of hawkish policy and neglect of human lives
seems to be a consistent pattern of this administration. From the
macro-economic measures which pander to the big business at the cost of
increasing poverty, to the unwillingness to deal with the proliferation
of hate speech in the civil society, people’s wish to live in peace and
stability is increasingly dismissed by the administration’s policies.

The enemy unites us. Too often, Abe disregards public opinion against
his ill-conceived proposals and does not even hesitate to sidestep
democratic parliamentary procedures to advance policies representing the
interests of the powerful and the rich. In this circumstance, it has
become evident to the organizers working with different issues in our
society, such as nuclear power plants, collective defense,
constitutional amendments, US base in Okinawa, State Secrecy Law, TPP,
consumption tax, welfare, labor, and agriculture, that none of these
issues can be handled democratically without ousting Prime Minister Abe
from office.

With the municipal elections in April coming up close, it is high time
we deliver the Abe administration a strong and clear message that we
will not take it anymore. We must reclaim our democracy from those who
dismiss people’s voice. On March 22nd, in Hibiya, let us be a massive
crowd and tell Shinzo Abe that his clique of dictatorial aspirations
does not represent us because we are a democracy. 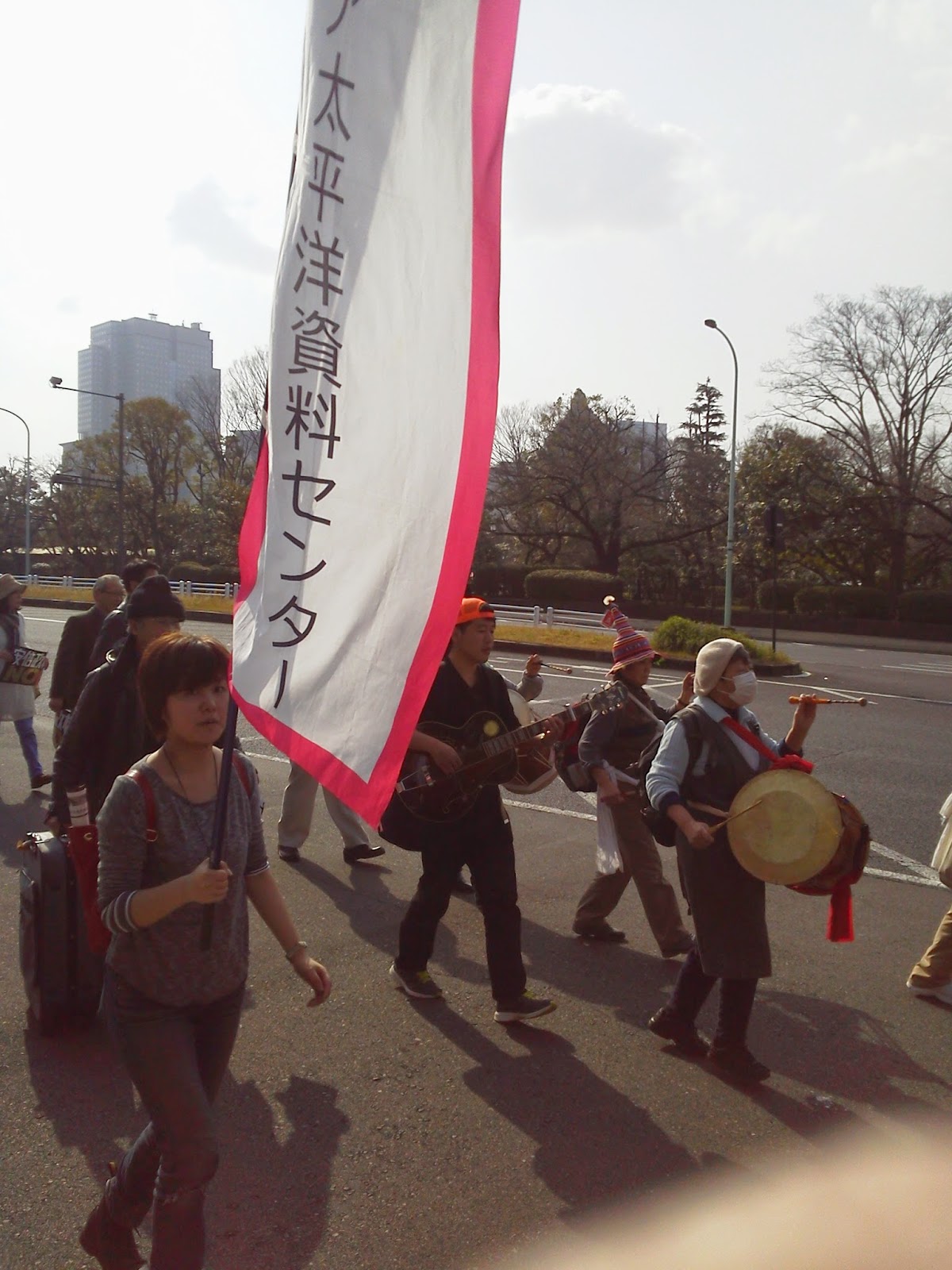 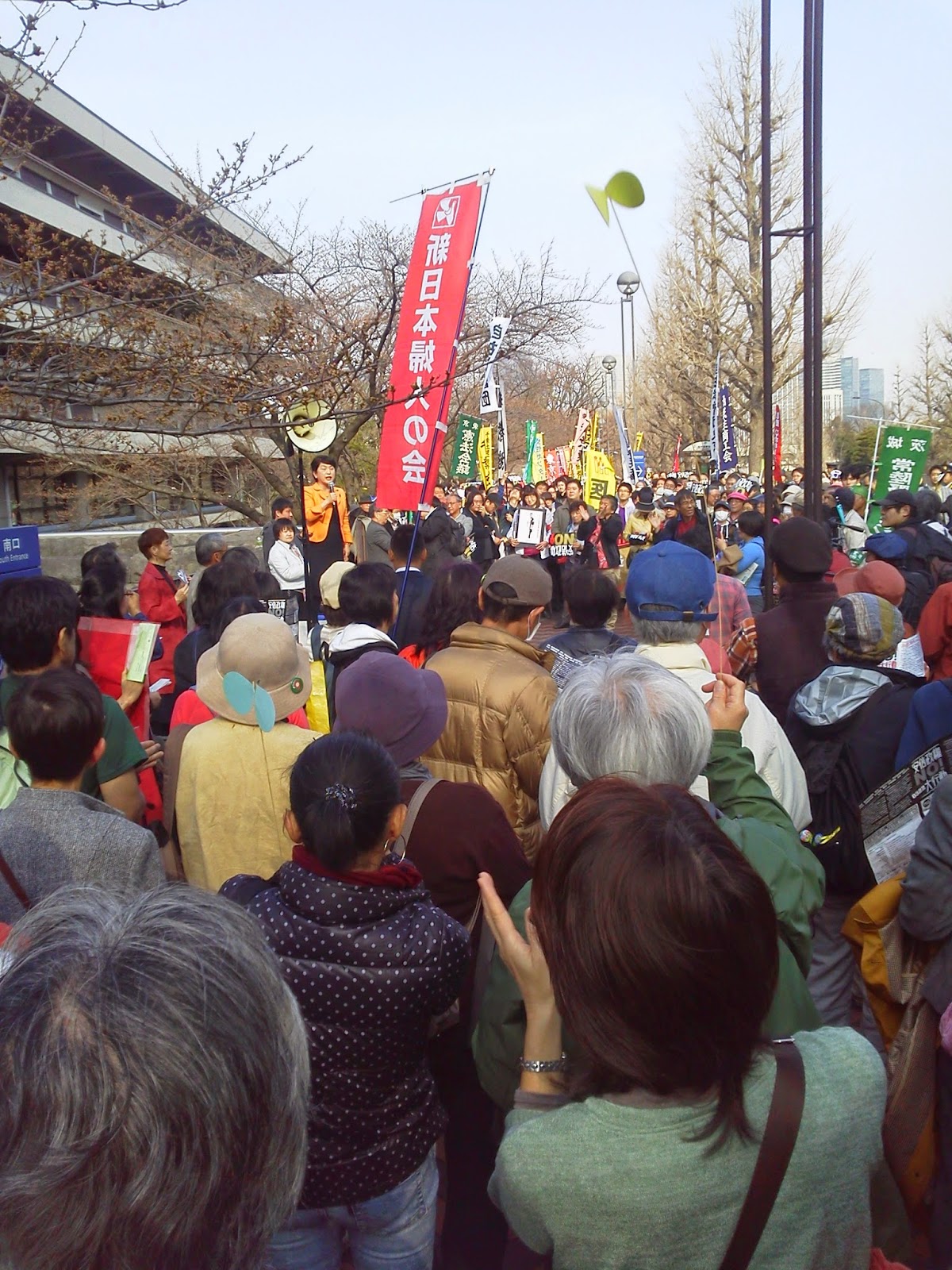 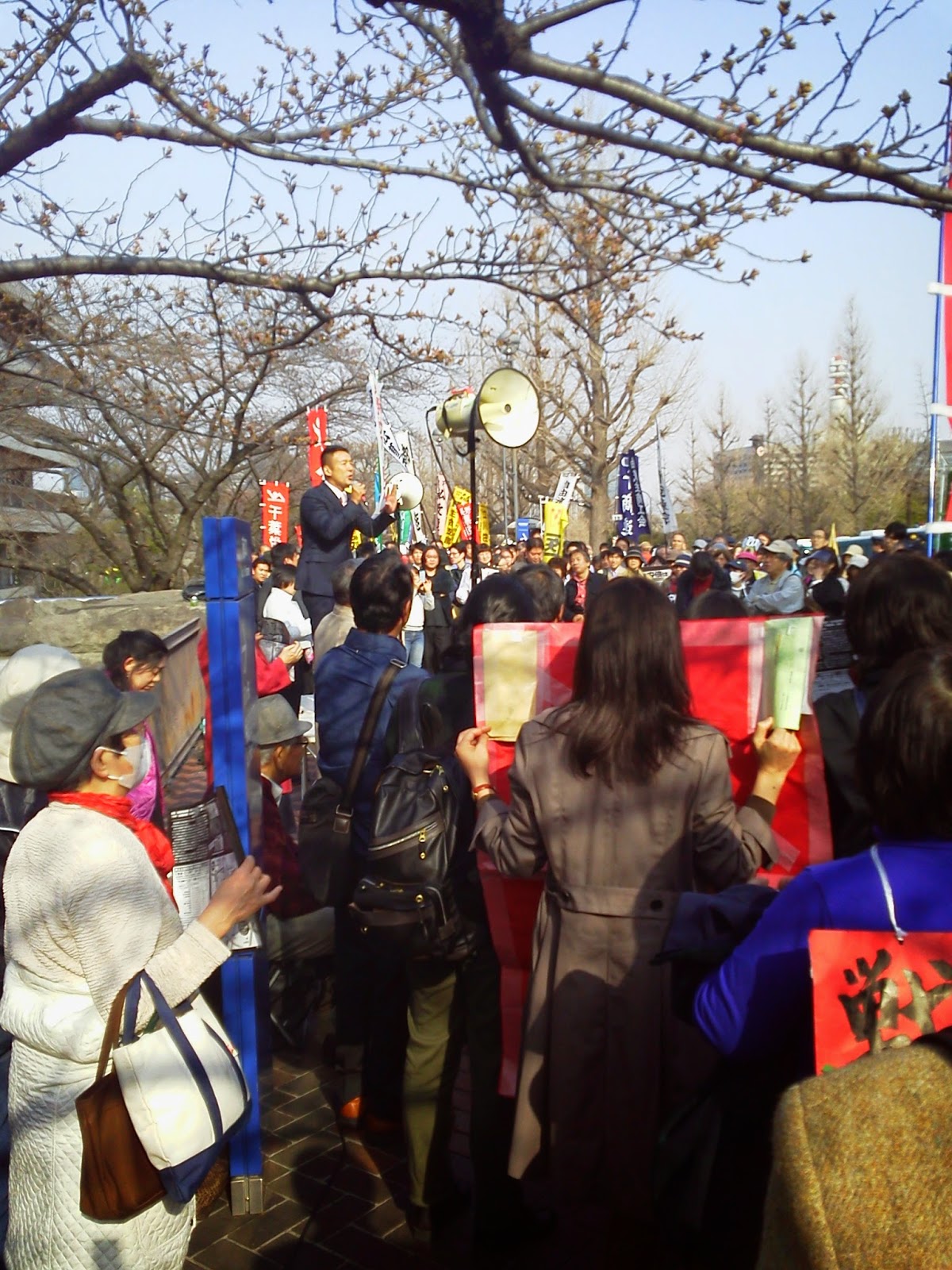 Could paraphrase this in 2002 as below:

"If you have ever been to a World Cup elsewhere, prepare yourself for the utter control here in Japan."

Communal events/watching games could only be held in stadiums and of Hachiko Square cordoned off for Japan matches, as many many Japan fans discovered after their first ever WC victory v Russia. But, fair play to them, they DID try and gave all the police, vans etc a hard time!

Btw, a crucial point and question. How much coverage did national tv/press/media give the demo? If none or very little who controls that agenda? As easy as A, B, E...