With binoculars, your can see at least four of Jupiter's moons.


The earliest known examples of mathematical and geometric astronomy have been identified in a series of ancient Babylonian cuneiform tablets. An analysis of the tablets, reported in the journal Science, reveals ancient Babylonians were able to calculate the position of Jupiter using geometric techniques previously believed to have been first used some 1,400 years later in 14th century Europe. “These texts are the earliest evidence we have from antiquity of mathematical astronomy,” said the study’s author Dr Mathieu Ossendrijver, a historian on Babylonian astronomy with the Humboldt University in Berlin. 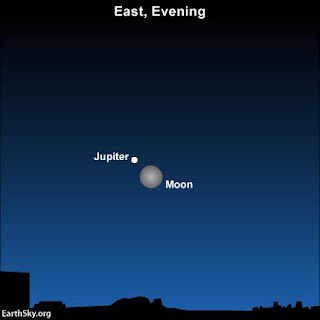 The tablets show two intervals from when Jupiter first appears along the horizon at night, to the planet’s position in the sky after 60 and 120 days.
The tablets also computed the time when Jupiter covers half of this 60-day distance by partitioning the trapezoid into two smaller ones of equal area.
“We’re not really sure why the Babylonians were so interested in the motion of the planet Jupiter, but one possible explanation is that Jupiter was associated with Marduk the supreme god of Babylon,” Dr Ossendrijver said.
“These astronomers or priests were employed by Babylon’s main temple where Marduk was venerated. Each god had a star and Marduk’s was Jupiter.”
Babylonian writing is thought to have originally developed as an accounting system for keeping track of property such as sheep, grain, or the size of a field.

“That’s what most of the cuneiform tablets we have from Mesopotamia deal with,” Dr Ossendrijver said.
“But by about 2000 BCE they began to develop a form of mathematics with sophisticated field computations and methods for solving what we call quadratic equations that go beyond these practical things. It’s a way of describing and computing motion, similar to what we today call integral calculus.”
These tablets redefine our history books as the origins of calculus are generally traced back to the Middle Ages when people began using geometry to calculate velocity by plotting the position of an object against time.
“This is highly surprising. No-one expected to find something like this in antiquity,” Dr Ossendrijver said.
Universe

Unknown said…
Amazing!! I looked out of my window in north London and (er) clear as day there was Jupiter, just off the Moon. From my literal perspective it was at the 1o'clock position. Oh to have had the pair of binoculars given to me as a present, er, many moons ago.

Martin J Frid said…
Thanks for the comment! Glad you saw it too. Jupiter is at 1 o'clock tonight here too, but far up and away, while on Feb 23 it really was close to the moon. Considering the distances, the speed we travel at suddenly becomes very apparent.
12:19 am, February 27, 2016

Martin J Frid said…
And now it is all gone. Amazing how the ancients were able to track it and realize the planets followed paths, that were re-occuring, even though it could mean generations before the next sighting.
10:22 pm, March 09, 2016

Pandabonium said…
Ancient peoples were amazing in their observations. These days I use my trusty "Peterson Field Guide Stars and Planets" to navigate the night skies. Wish I could do more of that, but my old body can't cope with the cold nights - which often come with clear skies.
9:53 am, March 10, 2016

Anonymous said…
It's also nice to think of the continuity - the Babylonians gave us seven days named after celestial bodies - which also came into use in Japan.
Too bad that most Japanese don't realise that 木曜日 has nothing to do with trees or wood, but everything to do with Jupiter, which was also the name of a Roman god whose attributes were similar to the Germanic Thor, from which we get Thursday....
4:46 am, June 01, 2016

Martin J Frid said…
Hi Wild, thanks for the comment. I didn't know that Moku is a reference to Jupiter. That's something I will follow up on, file under learn something new every day ;)
10:33 pm, June 01, 2016