The First Air Force One, the Lockheed Constellation, Restored

November 07, 2018
Update: And wrong I was. It was President Truman who had to deal with General MacArthur, as Pandamonium kindly points out in the comments.

Original post: Great video of the project to save the Columbine II and get it to fly again in 2018:


...Because this is the plane that took President-elect (correct me if I'm wrong) Dwight D. Eisenhower to South Korea in 1952, in order to stop General MacArthur, who was proposing atomic bombs all over the border inside Communist China,

Later in 1955, Eisenhower was promoting much the same as the New Look, a policy to expand American nuclear weapons, now against the Soviet Union. 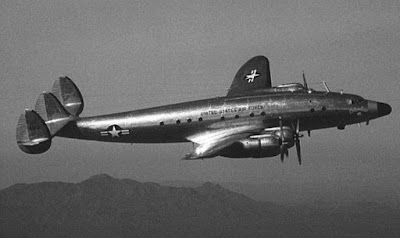 Known as the Columbine II, this beautiful aircraft, a Lockheed Constellation, was the very first "Air Force One" and now it has been restored and flies again.

After World War II, Eisenhower went on to serve two terms as President of the United States. MacArthur rendered outstanding service as military governor of postwar Japan but then fell victim to his own ego and defiance of President Harry S. Truman during the Korean War and was removed from command of United Nations forces.
Aviation Peace South Korea

Pandabonium said…
The Connie brought Truman to Wake Island in October of 1950 for a meeting with MacArthur at which time the President awarded the general an additional oak leaf cluster. In April of 1951, Truman relieved him of command of the Korean police action, but not because of nuclear weapons. Rather, MacArthur had publicly announced that he was giving the green light for General Ridgway to cross the 38th parallel and re-invade North Korea. It was for making this decision public that MacArthur was relieved as Truman had made it clear to everyone in his government that only the President could make policy announcements. Not about nuclear weapons. I don't know if that was done face to face or not. It is correct that Eisenhower used that plane to travel to Korea.

Eisenhower did not become President until January of 1952, and in any case, a President-elect has no power at all until actually sworn into the office.

Beautiful airplane though. I have always liked the look of a polished aluminum finish. The Constellation, the DC-7, and other fast piston powered aircraft of the time, were the cutting edge of the art, and imho, overly complex. As one might say of a beautiful woman - "high maintenance". :o
9:58 am, November 07, 2018

Martin J Frid said…
Thanks P, I appreciate the correction. I got the dates wrong. I wonder what Eisenhower went to Korea for in 1952?

He was later scheduled to visit Tokyo once president, but due to the massive protests, his trip was cancelled, and he never made it to these shores (Japan).
9:08 pm, November 08, 2018