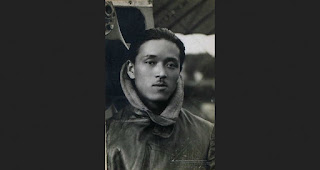 First time I heard of this guy and his great story. Harry Ohara was born in Japan, studied at Waseda University in Tokyo, went to British India and worked for a newspaper. When war broke out, he joined the British Army. Later he flew after having started as a mechanic.

Kyodo notes that he is thought to be the Royal Air Force's first - and only - Japanese pilot:

O'Hara applied to become a pilot at exactly the right time, according to RAF Museum curator Peter Devitt. A portrait of an intense looking O'Hara stands out among the heroes -- the only Asian among the portraits -- that decorate the wall at the RAF Museum.

More details at the Great War London blog, that notes (correctly) that he must have been flying for the Royal Flight Corps, not the RAF (RAF was formed on 1 April 1918):

In March 1917, O’Hara transferred to the RFC as a 2nd-class air mechanic (the basic rank for RFC men – equivalent to his rank of private in the Middlesex Regiment).  He was soon undergoing flying training, though, and living in London at 25 Fitzroy Square, a boarding-house run by Jukicki Ikuine, another Japanese man living in London. In 1911 Ikuine and his English wife had run a boarding-house entirely populated by Japanese men (servants, cooks and waiters), so perhaps his properties were a standard place for Japanese men to board.

O’Hara qualified as a pilot on 21 July 1917 at the London and Provincial flying school in Edgeware, and was immediately promoted to Sergeant by the RFC.  It is not clear where he was stationed between then and March 1918, when he was posted from France to the No 1 School of Military Aeronautics (in Reading), but at some point he became engaged to Norfolk-born Muriel M McDonald. They married in Lewisham in September 1917.

No 1 Squadron with their SE5As and dog

Top photo showing the handsome young pilot, proudly posing in front of his SE5A, which has become known as "the Spitfire of Word War One."

Thanks Our Man in Abiko, Patrick, for finding!

Pandabonium said…
So now we know there was a Japanese national who learned to fly for the UK during WWI and a few Japanese Army aviators flew for France. The Japanese Navy sent a couple of guys to the U.S. for flight training supplied with cash to buy a couple of float planes for their training. The planes were then shipped to (Lake) Kasumigaura here in Ibaraki Prefecture to train Navy pilots. Interesting.
2:32 pm, November 26, 2018

Yes it has. Perhaps due to a number of factors starting with its open space (we're on the Kanto Plain after all), large if shallow bodies of water, and (for Japan), mild weather year 'round, all in close proximity to Tokyo. So, in 1929 when the Graf Zeppelin visited Japan, it was herethat they landed; when, in 1931, the Lindberghs were mapping a great circle aviation route from the East Coast of the U.S. to Asia using a float plane, they came to Ibaraki. In those days, runways were a rare luxury, as Iinuma and Tsukagoshi knew very well, and flying boats and float planes were the norm.

When a development area was wanted for national and private scientific research and institutions of higher scientific education in the 1970's, a "Science City" was created in Tsukuba City, where else?, Ibaraki, tied by rapid rail - the Tsukuba Express - to Akihabara in Tokyo. On the Pacific, Kashima Port takes in petroleum products and iron ore and hosts factories of Nippon Steel and Sumitomo Metals. Further North, Hitachinaka City's port takes in LNG, and Hitachi Corporation has several facilities which make MRI machines and other medical, scientific and engineering equipment in the area.