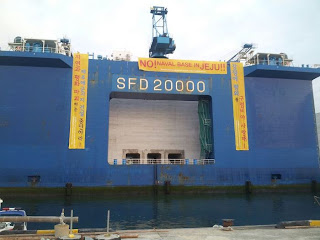 An international environmental conference is being held in Jeju, South Korea, somewhat under the radar here in Japan, but nevertheless an important event. However, all has not been smooth as the International Union for Conservation of Nature and Natural Resources (IUCN) made plans for their large event. IUCN was formed in 1948 and is a "conservative" group as opposed to more radical environmental organizations like Greenpeace or Friends of the Earth. Members of IUCN often include national government groups and in the case of Japan, members include groups like WWF Japan, Birdlife Japan and The Nature Conservation Society of Japan (NACS-J) which started back in 1949 to campaign to protect the Oze Marsh.

Interestingly, the Okinawan group that wants protection for the dugong, the rare sea mammal, is a member of IUCN's Japan Committee. This meant, for example, that they were able to propose a resolution to save the dugong at the previous IUCN conference in 2008 in Barcelona, Spain.

For the IUCN conference this year in South Korea, an activist from this legitimate and non-violent Japanese NGO, Save the Dugong Campaign Center, was denied entry and thus not allowed to participate with colleagues from around the world. That is a scandal.

The dugong is under threat from the attempts to build a US naval station move the US Marine Corps Air Station Futenma to a coastal area near US Marine Corps Camp Schwab, at Henoko, Okinawa. More details about the dugong campaign here (pdf). Ten Thousand Things has written extensively about the campaign, see search results here.

Several other South Korean activists were not allowed to join the IUCN conference due to their campaign against a new South Korean naval base in Jeju Island, just a few kilometers from the conference center where the IUCN is holding its big event. For example, the Gangjeong Village Association was not allowed by the IUCN (pdf) to put up an exhibition booth, that would have showcased the horrific destruction going on next door to the conference...  South Korean NGOs have tried to engage IUCN in dialogue, and you can read the tepid responses from the IUCN here and here. Says IUCN:

IUCN’s statutes declare that “all persons entitled to attend the World Congress shall be admitted to that State without discrimination”. We are therefore very concerned about the three registered Congress delegates who were refused entry into Korea in the last few days. We formally asked the Korean government for an official explanation two days ago. The Korean government responded this morning saying that the delegates were refused entry according to the Korean Immigration Control Act and that this has nothing to do with the Congress.
We look forward to a continuing open dialogue on these issues and others at this Congress and beyond. 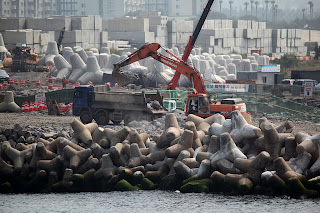 So, what are the protests in Jeju all about? For example, the way the construction is currently carried out, with massive "caisson" to be placed in the coastal waters. Says Save Jeju Now:


The aforementioned caissons are a subject of major contention by the anti-base activists and Gangjeong villagers. In the late 90s, years before the Jeju Naval base construction was even begun, the South Korean Ministry of Construction and Traffic declared that, due to the topography and weather of the South Jeju Sea, caissons were not proper to be used for construction in this area.
Completely ignoring this statement, the Navy/Construction company plan calls for  total of 144 caissons to be dropped in the total conservation area of the Gangjeong Sea of Southern Jeju. These massive caissons are also being dropped only 1km from a UNESCO World Natural Heritage Site and amidst Korean some of the worlds largest soft coral habitats. Soft coral is also a natural monument and endangered species in Korean.
When Samsung first began to bring the caisson to Gangjeong, it was discovered that they had not even done a simple and legally required inspection of the giant floating dock which is used to transport them. Samsung was later fined for this highly dangerous action.
Finally, two recent typhoons have been completely destroyed the 7 poorly made and dangerously placed thus far in the Gangjeong Sea. Their wreckage has litered the sea floor and contaminated the famously clean waters of Gangjeong. Learning nothing from this, Samsung continues to produce the caisson and will not change their plan. The Gangjeong sea is in a state of environmental emergency and if these unstable, unfit, and dangerous caissons continue to be dropped in this precious environment, the destruction could turn catastrophic.
In light of this new emergency, and the ongoing emergency of the illegal, unjust, and environmental destructive construction of the Jeju Naval Base in Gangjeong, the Gangjeong Village Association applied for a booth at the WCC 2012, to spread the word of this disaster. However, this booth was rejected by the IUCN under pressure from the South Korean Government and Samsung, a major sponsor of the WCC and primary destroyer of Gangjeong.
Please spread the word on this action and the Gangjeong Struggle. Especially, IUCN members, we appeal to you to listen to the cry of Gangjeong!
Peace in Gangjeong! No Naval Base!
More Photos Available Here

Top image shows the non-violent protest on September 6, 2012 when five South Korean activists climed on top of one of the caisson that are currently being used to build the naval base at Jeju Island. Bottom photo shows the construction site, just a few kilometers from the IUCN conference.

According to Okinawa Outreach, 2 members from Save the Dugong Campaign Center were denied entry to South Korea:

The South Korean Government has been deporting people who have been standing in solidarity with Jeju people since last year. The number of entry denials to international supporters for Jeju amounts to 22. We regard the denials of entry without specified grounds as a violation of human rights that are recognized and valued among everyone in the international community, including the freedom of expression, assembly and transfer.

I am happy to report that late on September 11, a motion (hopefully the resolution will be passed!) has been introduced at the Jeju conference that strongly rejects the "Civilian-Military Complex Tour Beauty project, a 50-hectare naval installation, being constructed within and adjacent to Gangjeong Village, estimated to house more than 8,000 marines, up to 20 warships, several submarines, and cruise liners..."

Source: Save Jeju Now: Motion on the Gangjeong Village


World Appeal to Protect the People, Nature, Culture and Heritage of Gangjeong Village