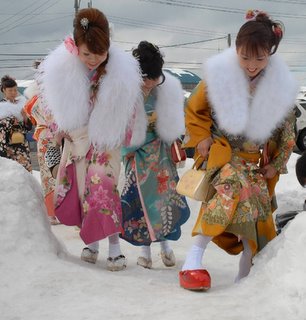 Participants in Coming-of-Age ceremonies in Akita prefecture, northern Japan, braved snow to celebrate becoming an adult. The number of Japanese who turn 20 years old in 2006 has fallen by 70,000 from the year before to 1.43 million, the second lowest figure on record. Japan is really concerned about its dropping birth-rate, just like many other developed countries. I like the way young Japanese wear gorgeous kimonos at such celebrations.

Maethelwine said…
This may be an odd first reaction, but the shoes seem particularly unsuited to the snow. Here in Hiroshima it doesn't snow that much, but you'd think the Tohoku girls could put crampons on their geta.
10:54 am, February 04, 2006