Is a Chinese bank in Macao laundering money for North Korea? 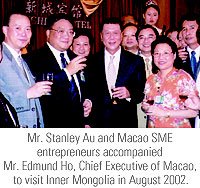 Asia can be confusing. Now it has emerged that a bank in Macao, a former Portugese colony, currently part of China, is helping North Korea with some very dirty business.

According to the U.S. government, the bank is a primary conduit for money earned by North Korea from counterfeit currency and drug smuggling. The BBC has more here and here about the accusations, which the bank has called a "ridiculous joke".

I can't find anything on Chinese websites about this. Isn't that curious? Here is the official website of the Macao SAR of the People's Republic of China. SAR means "Special Administrative Region". That is the same status as Hong Kong, meaning it is indeed a part of communist China, right? Well, I'm just asking. So, are the gentlemen running the show in Beijing (while busily imprisoning dissidents) all happily ignoring these charges, or not? If the U.S. has no evidence, it would look very silly indeed.

(Photo from the Delta Asia Bank)