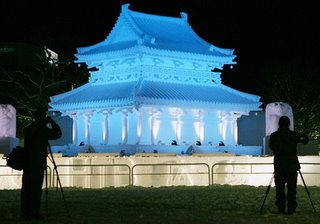 Mainichi carried this beatiful photo of an illuminated snow sculpture of the Golden Pavilion of Horyuji temple at Odori Park, the venue of the 57th Sapporo Snow Festival, on the eve of the opening of the winter festival in Sapporo on Feb. 5. More than 300 snow and ice sculptures are displayed to attract visitors to the festival held February 6-12.

The festival is famous, but I had no idea that Japan's Ground Self-Defence force soldiers are helping to create the snow and ice sculptures for the festival.

Horyuji, situated in Ikaruga in Nara, is the world's oldest surviving wooden structures dating from the 7th century. It was originally built by Baekje architects during the Asuka period to fulfill Emperor Yomei's deathbed wish to build a temple and an image of Buddha for the recovery from his illness. Read more about Horyuji on the wonderful website of Sacred Destinations.

Chosun Ilbo reported in December 2005 that Kongo Gumi, the oldest company in the world, which was founded in 578 in Japan by a group of people from the ancient Korean kingdom of Baekje, would go into liquidation. Kongo Gumi dates its foundation from the year when carpenter Shigemitsu Kongo built Shitennoji in Osaka, and Kongo Gumi is also famous for building the Horyuji Temple in Nara. Details like this makes history learning so fascinating!