Getting ready for the FIFA World Cup 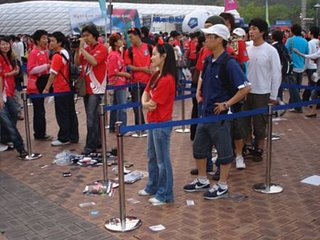 Korean fans are not happy with their team, as they lost big (1-3) to Ghana. The sponsors are expecting a lot from the World Cup, but clearly need to show some Corporate Social Responsibility (CSR) or this will be a messy event.

Daum has published some pretty embarassing photos of the garbage thrown away by Korean fans...

South Korea coach Dick Advocaat is concerned according to BBC:

"Game by game our team play has been getting worse and that is very disappointing."

Also, Yonhap reports that South Korean civic groups antagonized by the overwhelming attention being drawn to the 2006 World Cup have designed and distributed anti-World Cup stickers in downtown Seoul on Wednesday.

An alliance of about 100 civic groups are insisting that vital social and economic issues, directly related to improving the lives of the Korean people, are being overshadowed by the world's largest single sporting event.


Meanwhile, Japan and Germany had a good game, as 2-2 is not bad at all.

But Mainichi reports that an organization posing as a travel agency pocketed some 100 million yen for World Cup tours before disappearing. The Tokyo Metropolitan Government's Bureau of Labor and Economic Affairs said it has received inquires from eight people since the beginning of this month, and three of them said they have already remitted their tour fees.

"Some of the cases could constitute fraud, and we are set to call on consumers to exercise caution," an official said.

Tokyo Metropolitan Government officials said the company's business practices could constitute fraud, and urged consumers to be wary of it.

The real fun begins on Saturday, when Sweden plays Trinidad-Tobago, and then I look forward to the Sweden-England game on June 20!