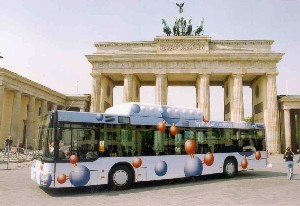 Football fans in Berlin coming or going from the Olympic Stadium are riding hydrogen buses during the World Cup. Two hydrogen buses are being tested as part of the EU's HyFLEET project. The project continues through 2009.

The buses are being tanked at a service station set up by French TOTAL, which is supporting the HyFLEET project as part of its sustainable development program and to contribute to the establishment of a safe hydrogen infrastructure for the future.

The station is itself part of the experiment. A steam reformer will generate, on site, gaseous or liquid hydrogen meeting the majority of the fuel needed to feed the buses. Additionally, fuel cells from the Sweden-based Vattenfall will be used to power and heat the tank station.

Previous: A green standard for the FIFA World Cup