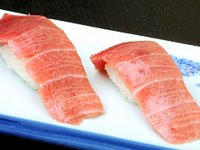 Kyodo reports that member states of the International Commission for the Conservation of Atlantic Tuna reached a formal accord Sunday to cut the eastern Atlantic Ocean and Mediterranean bluefin tuna quota for 2007.

Overfishing is a huge problem and cutting the quota from the current 32,000 tons to 29,500 tons is not enough.

In the Atlantic Ocean and the Mediterranean, fish farms have become increasingly common. Large quantities of tuna from such fish farms are exported to Japan and sold at sushi restaurants and supermarkets. Bluefin tuna and southern bluefin tuna are highly popular in Japan for use in sushi and sashimi. Fatty parts of their meat, known as "toro," are especially sought after and fetch high prices.

Japan gets about half of its bluefin tuna from the Mediterranean, according to Japan's Fishery's Agency official, Hiroaki Hasegawa. He also said to NHK that it is inevitable that the agreement will lead to less bluefin imports into Japan but he cannot say how it will affect the prices.

Clearly prices will go up, is that so hard to predict?

NHK adds that an international fisheries meeting will discuss in December whether cuts in catches of 2 cheap types of tuna -- bigeye tuna and yellowfin tuna -- are necessary.

(Photo from Gourmet Walker - wow, that looks good but at 400 Yen per plate I think I will have to pass!)
Food

Pandabonium said…
What boggles my mind is that 15,000 tons or so is considered sustainable, yet the plan is only to cut the catch to 29,500? I really wonder if I belong to the same species that is making such descisions.
6:50 pm, November 28, 2006

Anonymous said…
Interesting thing is that Norway, one of the whaling nations, was pushing for the 15,000 tonnes in accordance with scientific advice, where as anti-whaling European nations were the one's behind the weakened reduction.
11:30 pm, January 06, 2007