15 March is World Consumer Rights Day and this year Consumers International and consumer organisations around the world are calling on national governments to end unscrupulous marketing practices by the pharmaceutical industry.

Japan does not allow allow advertising of prescription drugs, and there are also other rules that protect consumers and patients here. For example, drug companies cannot use comparative language ("X is better than Y" or "P works faster than Q").

Meanwhile, Japan's Ministry of Health says 54 people have died so far after taking Tamiflu, according to Reuters.

Rokuro Hama, a medical doctor who heads a Japanese watchdog group on the side effects of drugs, said the ratio of those showing abnormal behavior is four times higher among those who took Tamiflu if limited to the period immediately after taking the drug.

Swiss drug maker Roche Holding AG, which produces Tamiflu, also known generically as oseltamivir, has denied a link between the medication and the deaths, adding that influenza itself could cause psychiatric problems, says Reuters.

So is Tamiflu safe? Chugai Pharmaceutical Co., the pharmaceutical firm that imports the controversial drug made regular donations of about 1.5 million yen a year to a professor who heads a governmental panel that studies side effects from the drug. Professor Shunpei Yokota from Yokohama City University lead the probe that announced in 2006 that it found there had been no causal relationship between Tamiflu and abnormal behavior in those who take the drug, according to Mainichi. A classic case of the fox guarding the chicken? You decide. 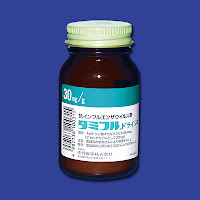 (Photo from Jouhoublog, a blog about drug approvals and pharmaceutical affairs in Japan)

Pandabonium said…
Another interesting question is whether it is effective in reducing total fatalities - different from reducing the number of infections. And, at what cost?
5:55 pm, March 17, 2007