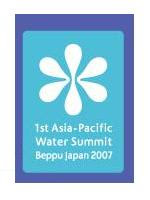 NHK World reports that participants in the first international conference on water problems in the Asia-Pacific region ended their two-day meeting with a declaration to supply safe drinking water to everyone in the region by 2025:

The memorandum calls for populations in the Asia-Pacific region that have no access to clean drinking water to be halved by 2015, and made zero by 2025. It also calls on governments to make water sanitation a political priority, and to increase funding for related projects.

The Asia-Pacific Water Forum website has the documents about the efforts to provide safe water and sanitation - a prerequisite for achieving the UN Millennium Development Goals and for good health and quality of life.
Many organizations and NGOs are involved in this undertaking. Links here (Impressive!)
Water News is where I click for updates.
G8