Think Again About US Marines Relocation To Guam

Guam is a small island not well equipped to handle the proposed move of US Marines from Okinawa. The move of 8,000 US Marines and their families may be delayed, according to Yomiuri and other sources.

A planned transfer of about 8,000 U.S. marines from Okinawa Prefecture to Guam could be delayed beyond the 2014 target, perhaps by up to six years, according to an office of the U.S. Defense Department. A final environmental impact statement released by the department's Joint Guam Program Office on Tuesday includes a proposal to delay the transfer of the troops and their dependents to as late as 2020 to reduce environmental impact from the personnel relocation and associated construction projects. However, the statement said a new time frame would be decided later.

This is a strange fact that suddenly emerges in the middle of this hot summer after all the ground-shaking events, including the way former prime minister Hatoyama fired his outspoken and very popular minister Mizuho Fukushima, who was strongly opposed to the way Hatoyama tried to appease the Americans, as he tried to argue that US Marines were needed for deterrence. Then, of course, Hatoyama simply resigned, as if he really didn't care at all.

Yomiuri has a note from 1955, when a very different Japan-US relationship was imagined, by none other than Ichiro Hatoyama - grandfather of Yukio Hatoyama. Such a very small world.

Wow, the things you can learn from wikipedia:

CIA files that were declassified in 2005 and then publicized in January of 2007 (...) detail a plot by ultranationalists to assassinate then prime minister Shigeru Yoshida and install a more hawkish government led by Ichiro Hatoyama in 1952. The plot was never carried out.

A good source appears to be this www.military.com file, quoting AP. Yukio Hatoyama, you knew more than you let on, didn't you. But that is all in the past, isn't it - except it seems to be the mindset of the Pentagon even today, is it not? 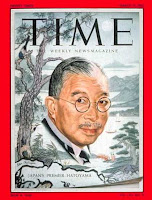 (Wow, what an interesting site: the covers of Time Magazine in 1955, including Dag Hammarskjold of the UN and said Ichiro Hatoyama, Japan)

Back to 2010: If Okinawa will not accept the US Marines, and they cannot move to Guam for all kinds of environmental reasons, or as Ten Thousand Things points out,

The Stars and Stripes reported today that the U.S. military final environmental impact statement on the planned buildup on Guam released today still targets the indigenous Chamorro sacred site, Pagat, as its "preferred" site for a firing range.

What will it take to convince an organization that doesn't demonstrate respect for local self-determination; democratic process; the sacred; traditional cultural heritage; indigenous rights; and the natural environment to nix this Kafkaesque, apocalyptic plan for Pagat?

Where will they end up going? Stars & Stripes notes:

On Guam, local officials and residents continue to complain that a proposed firing range will encroach upon an ancient Chamorro village and a popular swimming and fishing spot.

In its final environmental statement, the Navy stuck to its plans to put the firing range near the Pagat village site, a move that some local leaders have said will force the military to take the land by legal force. It’s a tactic the military has pledged to avoid.

Hmm. We know that the US Marines want to start deplying those huge, horrible V-22 Osprey helicopters, thus the current location inside the city of Ginowan is no longer an option. The old helicopters are out, and the Marines are in a rush to get the new ones. Except, they don't have any place to put them.

Just a couple of days ago, on July 9, 2010, there was this news from Okinawa's Prefectural Assembly:

Summary of the Ryukyu Shimpo's editorial:

The resolution calls the Japan-U.S. Joint Statement "an act of violence that tramples democracy," and "one that ridicules Okinawans."

The anger in the resolution is only natural. The Prefectural Assembly in February passed an unanimous resolution calling for swift closure of Futenma Air Station and opposing construction of a "replacement" base in Henoko, but it was totally ignored by former Prime Minister Hatoyama.

The anger of the Prefectural Assembly is directed against new Prime Minister Kan, who unscrupulously inherited Hatoyama's irresponsible "Japan-U.S. agreement."

The resolution also protests Kan's statement of "apology and gratitude for Okinawa's burden" at the Battle of Okinawa memorial ceremony on June 23, saying it was "an act that paid no consideration to the feeling of Okinawans."

Prime Minister Kan attempts to impose further base burden on Okinawans. If he had any heart for making that apology, he should cancel that imposition. That would be the only right thing to do.

Kan, in his policy speech in June, stressed on the "realization of relocation and closure of Futenma Base, and transfer of components of U.S. Marines to Guam." The bilateral agreement specifies the relocation of "8,000 Marines and 9,000 family members," but the most important information is missing, which is how many Marines will be left in Okinawa.

According to Okinawa prefecture's statistics at the end of September, 2009, the number of Marines stationed in Okinawa was 14,958, and that of the family members was 9,035. In theory, the number of Marines remaining in Okinawa after the Guam transfer would be approximately 7,000, with no family members remaining. However, according to research by Ginowan Mayor Iha, "the majority of Okinawa Marines have been dispatched to Iraq and Afghanistan, and there are actually less than 5,000 Marines in Okinawa."

So what is the rationale for transferring 8,000 Marines? Hatoyama, in his visit to Okinawa on May 4, said, "The more I learned, the more the deterrence effect of U.S. Marines I came to understand." The reality is, if one starts to "learn" anything, one will quickly discover that the bilateral agreement is full of contradictions.

So, these US Marines are clearly not wanted in Okinawa. Guam doesn't seem to be a great place to send them either. Time to think again, and start making suggestions that make sense. Please.

(Photo from the Peaceful New Earth Celebration Part II event, a screening of of The Insular Empire: America in the Mariana Islands, a documentary film directed by Vanessa Warheit. The film introduces viewers to the complex relationship between local residents and military history in the region, with a focus on the continuing harsh impact of U.S. militarism and colonization on the dwindling indigenous Chamoru population in Guam.)
Okinawa Peace US military bases

Unknown said…
As far as I know, Ichiro Hatoyama was in power when majority of US bases in Japan was transfered to Okinawa from other part of Japan upon strong resistance. It should be noted that resistance in Okinawa was also strong. The difference is that Okinawa is still under the military occupation of US at the time.

I guessed Yukio Hatoyama's strong intention(although not come effect)to relocate Hutenma airstation out of Okinawa may have to do with his ancestor Ichiro Hatoyma. No article I ever found to research this point.
5:01 pm, August 01, 2010