Biodiversity: Lectures In Okayama As We Prepare For Nagoya

Talking about biological diversity, food and agriculture this weekend - I like public speaking but I was in for a surprise on Friday in Fujita, Okayama, as the local radio station suddenly showed up for a live broadcast while I was in the middle of a talk with 6th graders at the Fujita Junior High School. You can imagine where their attention went as they saw a journalist enter with a microphone! (Loved talking with these kids, btw.)

After that we were rushed in a Toyota Prius to the next event, meeting farmers part of the local 農協 (Noukyou, agricultural cooperative, also known by their alphabet letters JA, Japan Agriculture). 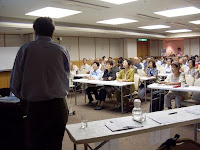 Fujita is a huge river basin that was converted to rice and veggie cultivation with the help of a German landscape architect in the Meiji era. Great comments from some very astute onion and renkon farmers, and a lady who is known for not using chemicals for her akatombo kome (rice from a field with red dragon-flies that thrive without causing any harm to her crops).

What are they most worried about? The fact that as of today, noone from the younger generation appears to be interested in taking over. As we continued the Q&A session, one guy in his late 20s stood up and said he is thinking of taking up farming, having just moved back to Fujita recently. Isn't this the way...?

My suggestions included creating antenna shops to showcase Fujita's special produce, with their special brand. This could also influence not only consumers in cities like Tokyo but also visitors from other countries, like China, who are increasingly interested in strict rules for safe food. 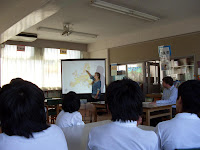 Lena Lindahl from Sustainable Sweden Association, who first lived in Kyoto back in the 1980s, talked about wild animals and the connection to environmental education.

Recently, she is also very concerned about global fishery issues, after having spent some time with Isabella Lövin, introducing her book about the mad, mad world of EU fishery policies to Japanese experts.

Lena is an expert on Swedish environmental law, having translated the legislation into Japanese.

The main talk was on Saturday. Some 80-90 people turned up. Very nice organizational effort at the Okayama International Center (where I spent some time on the internet tubes, but just a little, when I was at the Sogenji temple back in 2003).

Media was a rather good surprise: the local NHK was there and filmed us for an evening news segment. So far, at least one local newspaper did an article with a photo (Yomiuri also interviewed us).

All in all, "real work" as we are getting ready for the UN summit in October in Nagoya about biodiversity, for the Cop10/Mop5 meeting with some 10,000 participants... What is at stake? Biodiversity loss rates, introduction of foreign invasive species, GMOs, genetic erosion, agricultural biodiversity & biodiversity and food... 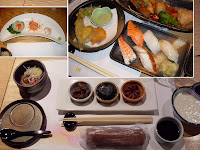 After that, a wonderful dinner with local dishes, heated conversation, and lots of laughs.

The sashimi included sawara, a mackerel that thrives in the Seto Inland Sea south of Okayama. Considered a seasonal fish, we were delighted to get a chance to savour it together with tempura and other dishes like fresh tofu and different kinds of autumn potatoes.
Biodiversity Food Okayama Sweden

Pandabonium said…
Well done. Looks like you had a very good program and turnout of interested folks. Thanks for your hard work.
5:42 pm, September 16, 2010

We got lots of comments, it is a major thing here, the members of the audience like to fill in the questionaire and we will now have to go through all the questions.

Another positive point was that many people seemed to make up their minds to go and attend the events in Nagoya in October!
8:56 pm, September 16, 2010