Steps On The Way Down: Akinori Ito 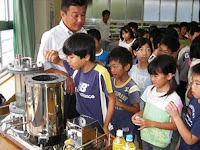 It is no secret that the world has reached the peak of oil production and will begin a steep descent in the near future - in 1 to 5 years depending on who one listens to. Several government and business reports issued this year have confirmed that fact. The decline will be around 10% per year and will scarcely be offset by expensive and/or dirty fuels like Alberta Tar Sands, shale oil, and "clean coal". Ethanol is a net energy loser which exists because of subsidies and also takes away food crops desperately needed in our hungry world. Wind and solar will have a role to play, but will still represent at best a few percent of the energy we use now for the foreseeable future. In the years ahead, we will "simply" have to adjust the way we do almost everything to use much less energy.

While no technological miracle is going to "save us" from the end of the oil age, there are some bright spots. To wit:

Akinori Ito, the CEO of Blest, has built a machine for turning plastic back into oil. The technology is not complex (or unique) but Ito-san's machine, and what he has done with it, does present some interesting possibilities as world oil production declines. No, it won't keep the cars rolling along. We're done with the cars - no matter what powers them.

Cars require enormous amounts of energy to be produced in the first place, plus oil to make the plastic interiors, tires and so on. The roads they run on are made from oil as well. All of it uses oil powered machinery to mine and transport the raw materials and to be maintain the roads and cars. There is no escape for cars. So ...

What makes this machine interesting to me is it's small size and the way Ito-san has travelled to places in the "2nd world" such as the Marshall Islands to introduce adults and children to the idea that plastic can be a resource. While he mentions fueling cars in the video, which resonates with first world car addicts, I can think of much more important uses for this machine (and I suspect he has too). Such as...

Putting one of these devices in a small community and feeding it with all the trash that is presently either burned in an incinerator or is being left in the environment - on the beach, along the road side, etc. - and using the volunteer labor of the local people to harvest it. The resulting oil could be used as appropriate for each locale. In the Marshall Islands, for example, it might be used for running a village generator that provides lighting and runs the village laundry, so that they no longer have to import diesel. In colder climes the oil could be used to heat homes or put to other use. The unit is small, so adaptable to each particular local situation.

In the long run, plastics will "dry up" since they come from our diminishing supplies of oil to begin with. Don't think of this as a source of energy - it isn't - but as a form of recycling that gives plastic more value. The energy needed to make the machines themselves won't always be there either. But since the machine is used at a local level and not trying to power "business as usual" forever, that would be OK.
Wouldn't it be nice to use the plastic trash of industrial consumer civilization to help ease the transition to a low energy future and clean up our mess in the process? 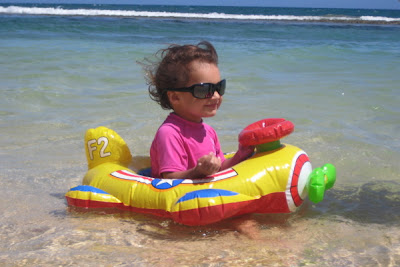 Martin J Frid said…
I guess I am hoping against hope that a lot of these initiatives will add up, and make a difference. Of course our lifestyle (that we tend to take for granted) will have to change. Turning water into wine was never that easy, either...

What this tells us is that there must be a lot of clever people - in Japan, and anywhere - who can use their creativity to help people deal with the steep descent, as you put it. We will need every insightful individual available. I agree that this is not aimed to "save us" but at least he has showed us one way to go forward.

Could this be up-scaled, say providing each and every junior high schools with one of these machines?
12:49 am, September 05, 2010