Remember this film. Join Danny and Mac as they stroll along Ferness beach, Camasdarach, Scotland and discuss the implications of a world without oil.

The film is set in the fictional fishing village of Ferness on the west coast of Scotland. A young representative of an American oil company is sent to the village on a mission... The film's soundtrack, which outsold the film itself, was written by Mark Knopfler of Dire Straits, and is considered amongst his best work.

A very special film, from way back in the early 1980s, directed by Bill Forsyth.

No automobiles, no nylon, no polish, no detergents, no paint, no ink... No water-proof coats, and what about dry-cleaning fluids...?

I like Japanese films, but can you tell me even one motion picture from this country that touches on important themes like this? 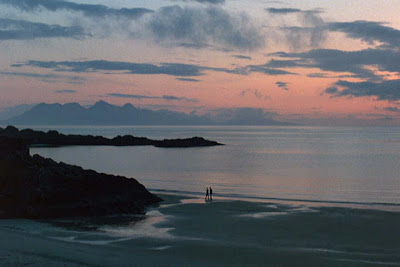 We take so much for granted, we have so little to offer in case things get rough. I like how connected we are, but at the same time, we hardly know our neighbours. Do you say hello to the people living next door? Do you know their names? We are more familiar with news about stars and idols, than with the ordinary people living next door.

Saving your local beach, or that small satoyama forest, your local community: how would you go about it? Do you know enough about City Hall politics or local networking?

Thanks for reading Kurashi, comments and questions are much appreciated.

I started this blog back in the spring of 2005.

Food and energy issues are always on my mind.

Oil billionaire Happer sends Mac to a remote Scotish villiage to secure the property rights for an oil refinery they want to build. Mac teams up with Danny and starts the negotiations, the locals are keen to get their hands on the 'Silver Dollar' and can't believe their luck. However a local hermit and beach scavenger, Ben Knox, lives in a shack on the crucial beach which he also owns. Happer is more interested in the Northern Lights...

When Mac MacIntyre (Peter Riegert) is sent to Scotland's west coast to swindle the "simple" townsfolk out of their drilling rights, you know the natives are going to somehow turn the tables. Great performances throughout (including Burt Lancaster as a wonderfully crazy Texas oil magnate), a loving portrayal of small town life, and beautiful scenery will surely have you contemplating a trip to Scotland before Mac comes to grips with his direction in life. Funny, charming, and quirky, this movie is a joy ride from beginning to end.

It doesn't get much better.

Thanks Tom for introducing, back in Suidobashi.
Economics 101 Energy peak oil

Tom O said…
I personally cant think of a better eiga that sums up Kurashi. The transformation of `Mac` (he is sent because he is Scottish although is Hungarian brethren changed their name upon arrival to make life easier...) from Oil man to, erm, real man. Person. Himself truly. "I`d make a good Gordon, Gordon." When he has to leave, he arrives back at his apartment in Houston and gets the shells out of his pockets, and calls the phonebox... Once again, lump in throat. True life, true message, true meaning. Even 27 years on. I could go on...
3:50 am, September 06, 2010

steveb said…
One of my all-time favorite films. I watch it whenever I need reminding that simpler is more fulfilling.
7:42 am, September 06, 2010

Edward J. Taylor said…
One of the best. There are quite a few Japanese films that take on 'the man.' "Pompoko," "The Human Condition," and Kurosawa's "The Bad Sleep Well" take on environmetal devastation, unjust war, and corrupt business practices, respectively.
12:39 am, September 07, 2010

Martin J Frid said…
Sirs, thank you for the comments. Much obliged. There is a message for 2010 here.