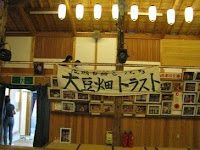 I went to a fun meeting today with the Soybean Field Trust Movement people, including farmers and consumers, who are trying to encourage interest in locally grown soy. One speaker noted that in Ibaraki Prefecture (considered No. 2 after Hokkaido for soy production) a recent inventory revealed over 100 different varieties. Much soy in Japan is used for tofu, miso and soy sauce. Did you know that soy is used as edamame, often as a snack?

The Soybean Field Trust Movement started some 13 years ago, when it became clear that imported soy from the US was increasingly genetically modified, and controlled by large multinational corporations like Monsanto. On top of that, the soy that Japan imported from Latin America was found to lead to the destruction of the Amazon forests.

Japan still imports a lot of soy, but companies like Honda Motor Co. (!) have set up special silos in North America that only accepts non-GMO soy:

Be that as it may, soy bean farmers around Japan feel a keen sense of responsibility to carry on traditional farming methods and food culture. 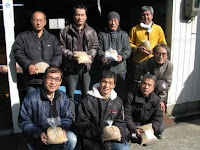 Soybean Field Trust Movement is active around Japan, and do try to find them, and join their activities. If their blogs are anything to go by, they are truly doing their very best to make the rural Japan experience something worth writing home about:

You can order Soybean Field Trust products via the PAL Network (Ibaraki). I also recommend soybeans and other products from Warabemura (English).

Mamejin has a pretty complete list of everyone who is part of this amazing movement.

Marukawa Miso was at the meeting today, they are a riot. Hey: "Money is more important than life itself!" LOL.

Oh, if that was just too negative, but you get the drift. Here is another take on rural life, Natsuko's sake. It started as a popular manga, and became a wonderful TV series. Natsuko is a young lady who makes every effort to revive rural sake making by farming rice organically, and winning over all her critics. Did you know there are people with a fetish thing for yellow rubber boots and actress Wakui Emi?
Part 1 here (from 1994).