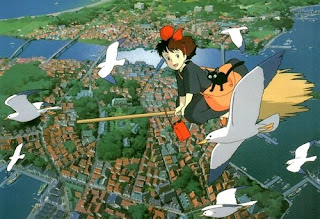 I don't fly much these days, I feel I have more or less used up my miles when I was younger, and thinking about the planet, we all ought to travel more climate-friendly (and travel less). Be that as it may, there is also something subconscious about flying - I dream about hovering, levitating, using nothing at all to be air-borne. Might have something to do with watching Michael J. Fox in Back to the Future, 25 years ago? Remember all those hover skateboards escapes and cool cars that didn't need any roads?

Or how about Kiki's Delivery Service, a wonderful Ghibli feature from 1989, set mostly in the imaginary skies over Visby, Gotland, a small island in Sweden. Kiki battles her reluctant broom as she saves the day. I like how they used that airplane in the beginning, a  Handley Page, only a handful were built in the UK.

G-AAUD, production number 42/3, was named after the Carthaginian explorer Hanno the Navigator, who explored the Atlantic coast of Africa in approx. 570 BC. Hanno first flew on 19 July 1931 and was later converted to a H.P.42(W) (Hannibal class).

Back to the film - almost impossible to find on Youtube, so do rent it, or buy it, it is a classic. Apparently, the idea was to show a Europe that had not gone through two world wars... Well, Sweden fits the bill, but we have precious few flying mago.

This clip is from a special concert in the Budokan in Tokyo, with composer Joe Hisaishi conducting the NHK Philharmonic. Enjoy!

wow. Those beautiful airplanes were destined for sad destruction due to winds beyond their design.

How far we have come in terms of structure, yet we are still vulnerable when it comes to fuel.

Pandabonium said…
I hate to be alone in commenting, but you know, Ghibli is the standard when it comes to feature animation film. How cool that there was a concert to feature this film.

Actually, the entire Budokan concert is available on Youtube.

Tom O said…
The museum in Kichijoji/Inokashira-Koen is rather a magical place, especially the 'studio' room with all that original artwork. Of course, a tough call having to wander thru Ino'-Koen after, following the canal from Mitaka.
12:07 am, April 30, 2013