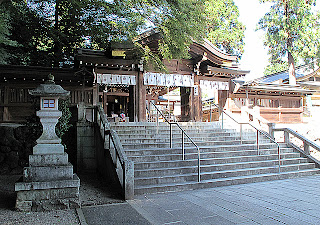 Koma, a small town in rural Saitama, Japan has an amazing story to tell, and if you visit the small Koma Shinto shrine, you will be told that this tiny hamlet was the place where a bunch of survivors from a war on what is now the Korean peninsula - I have no idea what it may have been known as back then - some 1300 years ago.

People escaped from all the way across the ocean, and ended up safely, here?

In fact, even today, people are confused about what to call that Korean region. Even more seriously, Communist China appears to try to claim large parts of the region (which is now to the north of North Korea, if I understand things correctly).

Here is what Koma, Saitama looks like today, while the wikipedia entry for "Koma" redirects to Goryeo, the ancient Korean kingdom from 918–1392.


Ken has this to add:

This shrine is also very old and was founded about one thousand and two hundreds years ago. It is said that the prince, Jakkou, of the ancient Korean dynasty had visited and stayed in Japan with his people in 7th century AD as mentioned in the previous chapter. Because his country was conquered by Tang dynasty in China during his staying, unfortunately, he was made resign to go home and decided continuing to stay in Japan. He and his people taught various things to people here and gave great influences on them in many fields such as the silk production, agriculture etc. Then the Japanese government established Koma County and nominated him as a mayor of the County in 716 AD, recognizing his greatness. This shrine was, thereafter, founded and dedicated to him.

It is heartwarming and refreshing to wander on the country road from the foot of Hiwada-san through Koma-jinja Shrine via Shou-den-in Temple in early spring.(Same as Course A specified in Chapter 9) You would surely feel a start of natural lives of the year, pale green buds on the branches of trees, sound of birds, agile movements of small animals and so on.
In recent years many people come to this shrine to pray, especially for a new year. Autumn festival called Rei-tai-sai is also held in October every year when selected people dance in special costumes as shown in the photograph below.

(Photo, Left ; Dancing in the autumn festival, Right; Festival ornament in front of the shrine)

There is a historical old house preserved in the backyard of Koma-jinja shrine. This used to have been inhabited by the Koma family and now, it is open to public for education. There are many kinds of Japanese apricot trees in the backyard and they are in full bloom in February and so beautiful. In addition, chrysanthemum flower contest takes place here in November.
(Photo, Left; a Historical Old House of the Koma Family)


Meanwhile, an American blogger living in South Korea has this to add to the mystery, with comments from others.

So tiny Koma here on the Seibu Line in my neighborhood is somehow linked to a strange conspiracy where Communist China is trying to usurp a large part of Korean territory?

I rather doubt that the locals would want to have anything at all to do with that!


As China is set to open an exhibition center specializing in displaying relics of Korea’s ancient kingdom Goguryeo in Jian, Jilin Province on May 1, it has begun in earnest to publicize key parts of its Northeast Asia Project that claims Goguryeo as its local state.
Dong-A Ilbo reporters and Goguryeo historians have visited the museum, which preliminarily opened to the public early this month, to conduct an in-depth analysis of China’s distortion of Goguryeo history. The museum opened after 10 years of preparations.

Located in an area bordering North Korea, Jian was the capital of Goguryeo from 3 to 427 A.D. and has approximately 12,000 Goguryeo tombs. The Monument of King Gwanggaeto the Great is also in Jian.
The museum is not so large in size, as it has six exhibition rooms on two floors. One doesn`t need to be an expert in Korean history to notice that the museum did not provide any explanation about Goguryeo’s link to the Korean Peninsula. Goguryeo’s relocation of its capital to Pyongyang, a large-scale war between Goguryeo and China’s Sui Dynasty and the fact that heaps of Goguryeo relics have been excavated in the Korean Peninsula are little mentioned.

By contrast, the museum emphasized that Goguryeo was under absolute influence of and fused politically, economically, socially and culturally with Chinese dynasties in the Central Plain. This thoroughly reflects the core parts of studies conducted under the Northeast Asia Project, although the museum does not directly mention that Goguryeo was a local state of China. A historian who accompanied Dong-A reporters said, “Though it is not explicitly stated, the museum claims that Goguryeo history is a part of Chinese history.”

The Research Center for Chinese Borderland History and Geography of the Chinese Academy of Social Sciences, a government think tank, carried out from 2002 to 2007 the Northeast Asia Project, including the history of ancient Korean kingdoms such as Goguryeo, Balhae and Gojoseon into Chinese history. Faced with South Korea’s protest at the time, the Chinese government claimed that Seoul was reacting “too sensitively” to some scholars’ academic discussions, denying that it was a state project.

“Just as South Korean scholars have been concerned, the Chinese government is applying Northeast Asian Project research results to the field to solidify the project, starting with the opening of the Goguryeo museum,” said Cho Beop-jong, a professor of history at Woosuk University. “South Korea should respond proactively.”

Proactively, right. You can't win, these ancient battles are part and parcel of living in Asia, as long as there are communists and nationalists and whatnot. Without much further foreign involvement, things would probably stay the same, for a very long time. Meanwhile, isn't it wonderful to ponder the fact that that simple shrine here in Koma, Saitama, is a shinto shrine. The native goods of Japan do not seem to mind.

As for Wikipedia, I find it very useful, but I also hesitate to rely on any site that has more than 500 revisions. The Northeast Project of the Chinese Academy of Social Sciences is one such wikipedia site. For more about Goguryeo (ancient northern Korean) do check this wikipedia page or History of Korea.

Buddhism was introduced here [in Korea] as early as in 372, but was more popular in other parts of the ancient Korean kingdoms...

When I read the news each day I think these peoples of various faiths and economy systems and interpretations of history have yet to find a way to recognize the wonders and miracles of each other, as each and everyone is so great. Love your neighbor. North East Asia will continue to surprise, while inspire an ignite profound trends, for a very long time.

When visiting Nara, for example, you are not just visiting "Japan" but really a puzzle or matrix of influences that include people who came all the way to this city from India, China and Korea.